‘Where is Nancy?’ An intruder broke into Nancy Pelosi’s home and assaulted her husband with a hammer after calling her name 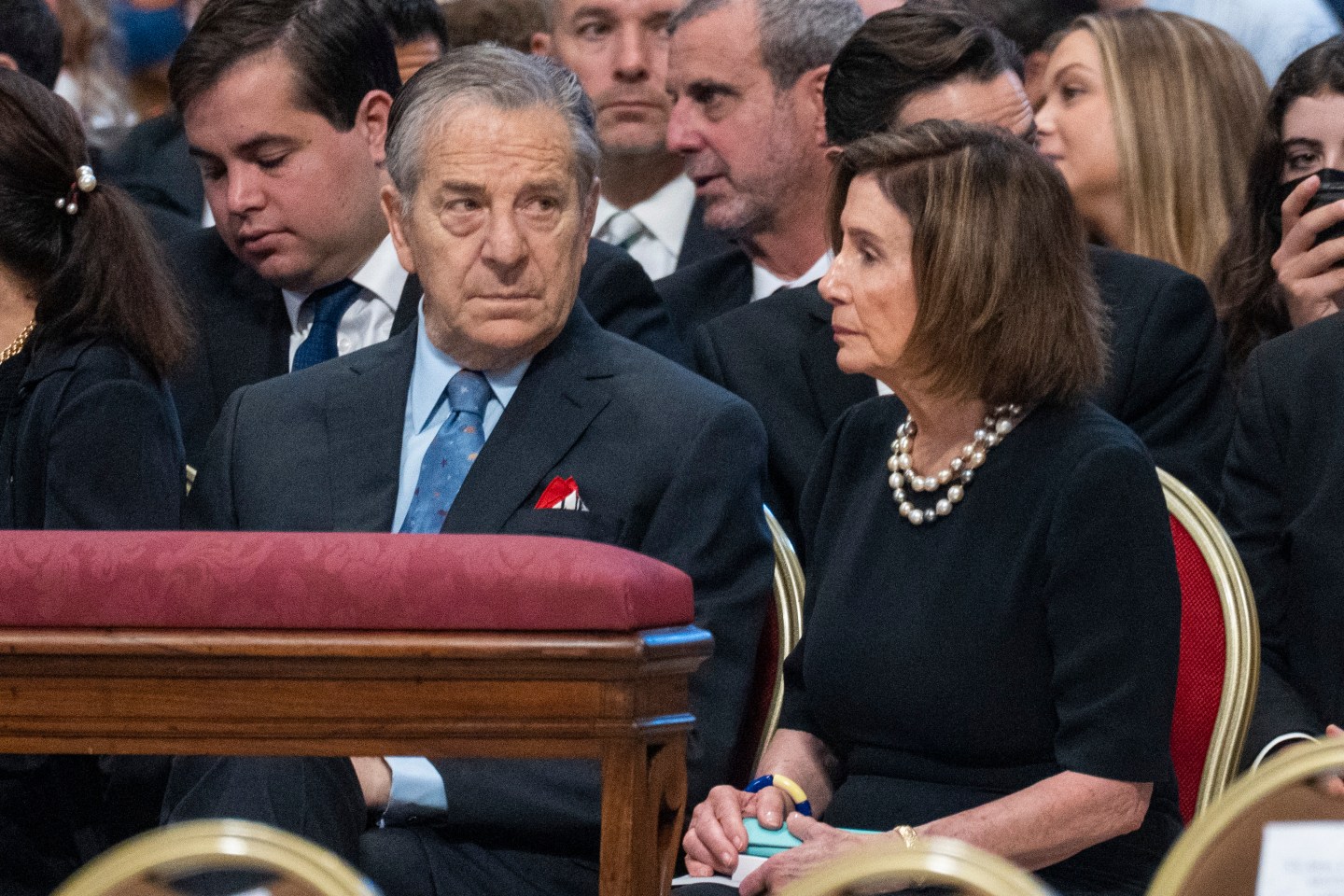 US House of Representatives Speaker, Nancy Pelosi (R), with her husband Paul Pelosi (C), attend a Holy Mass for the Solemnity of Saints Peter and Paul lead by Pope Francis in St. Peter's Basilica.
Stefano Costantino/SOPA Images/LightRocket via Getty Images

The intruder who attacked House Speaker Nancy Pelosi’s husband in their San Francisco home was searching for the Democratic leader, shouting “Where is Nancy, where is Nancy?” before assaulting Paul Pelosi with a hammer.

That was a chilling echo of the chants during the Jan. 6, 2021, insurrection at the Capitol, when rioters trying to stop Joe Biden’s election searched menacingly for the House speaker.

Paul Pelosi was attacked and severely beaten by an assailant with a hammer who broke into the Pelosi home early Friday, according to people familiar with the investigation. The assailant confronted him shouting for the speaker’s whereabouts, according to another person briefed on the situation.

Paul Pelosi, 82, suffered blunt force injuries to his head and body, according to two people who spoke to The Associated Press on condition of anonymity to discuss the ongoing probe.

The assailant was in custody.

Pelosi was being treated by doctors for bruising, severe swelling and other injuries. Nancy Pelosi’s spokesman Drew Hammill said he was expected to make a full recovery.

“The Speaker and her family are grateful to the first responders and medical professionals involved, and request privacy at this time,” Hammill said in a statement.

While the circumstances of the attack are unclear, the attack raises questions about the safety of members of Congress and their families. Threats to lawmakers are at an all-time high almost two years after the Capitol insurrection. The attack also comes just 11 days ahead of midterm elections in which crime and public safety have emerged as top concerns among Americans.

In 2021, Capitol Police investigated around 9,600 threats made against members of Congress, and members have been violently attacked in recent years. Former Rep. Gabrielle Giffords, D-Ariz., was shot in the head at an event outside a Tucson grocery store in 2011, and Rep. Steve Scalise, R-La., was severely injured when a gunman opened fire on a Republican congressional baseball team practice in 2017.

Capitol Police, tasked with protecting congressional leaders, said Nancy Pelosi was with her protective detail in Washington at the time her husband was attacked. She’d just returned this week from a security conference in Europe and is due to keynote an advocacy event Saturday evening in Washington with Vice President Kamala Harris.

Often at Nancy Pelosi’s side during formal events in Washington, Paul Pelosi is a wealthy investor who largely remains on the West Coast. They have five adult children and many grandchildren. The two have been married 59 years.

Earlier this year, Paul Pelosi pleaded guilty to misdemeanor driving under the influence charges related to a May crash in California’s wine country and was sentenced to five days in jail and three years of probation.

President Joe Biden and lawmakers from both parties reacted to the assault with shock and expressed their well wishes to the Pelosi family.

“What happened to Paul Pelosi was a dastardly act,” said Senate Majority Leader Chuck Schumer, D-N.Y. “I spoke with Speaker Pelosi earlier this morning and conveyed my deepest concern and heartfelt wishes to her husband and their family, and I wish him a speedy recovery.”

“We have been to many events with the Pelosis over the last 2 decades and we’ve had lots of occasions to talk about both of our families and the challenges of being part of a political family. Thinking about the Pelosi family today,” tweeted Sen. Roy Blunt, R-Mo.

“The President is praying for Paul Pelosi and for Speaker Pelosi’s whole family,” Jean-Pierre said. “This morning he called Speaker Pelosi to express his support after this horrible attack. He is also very glad that a full recovery is expected. The president continues to condemn all violence, and asks that the family’s desire for privacy be respected.”

The Pelosi home in the wealthy Pacific Heights neighborhood has been the scene of several protests in the past few years. After Nancy Pelosi was seen on video getting her hair done at a salon while many were shut down during the coronavirus pandemic, stylists protested outside with curling irons. Members of the Chinese community protested outside recently before Pelosi’s trip to Taiwan. And during debates over the federal stimulus package protesters scrawled anarchy signs in black paint across the garage door, along with “cancel rent,” and “we want everything.”