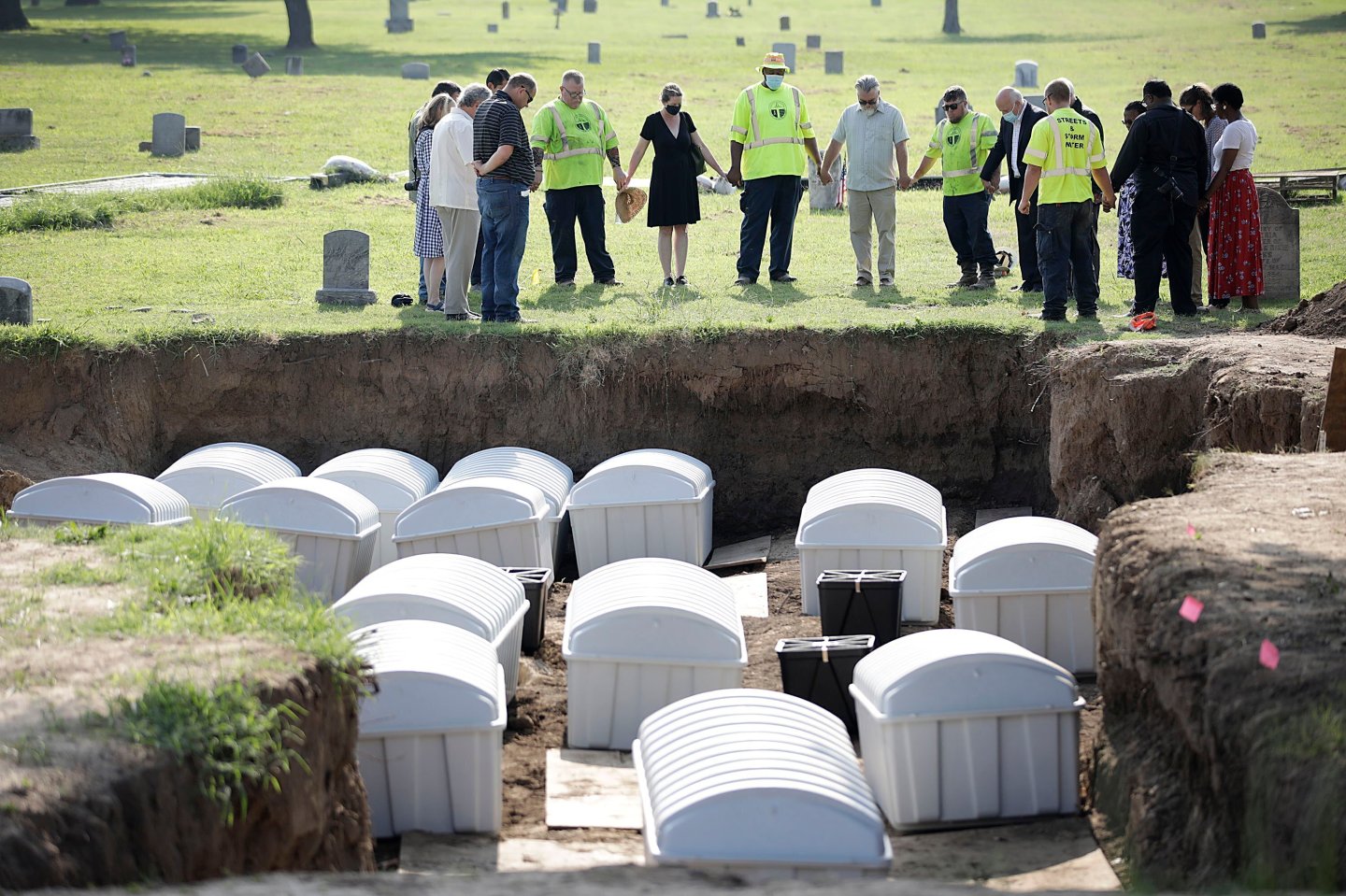 A group prays during a small ceremony as remains from a mass grave are re-interred at Oaklawn Cemetery on July 30, 2021, in Tulsa, Okla. The mass grave was discovered while searching for victims of the Tulsa Race Massacre. Some of the 19 bodies taken from the Tulsa cemetery that are possible victims of the 1921 Tulsa Race Massacre will be exhumed again starting Wednesday, Oct. 26, 2022, to gather more DNA for possible identification.
Mike Simons—Tulsa World/AP Images

Some of the 19 bodies exhumed for testing in an effort to identify victims of the 1921 Tulsa Race Massacre and then reburied in an Oklahoma cemetery will be removed again starting Wednesday to gather more DNA.

The latest exhumations of bodies, some of which were taken last year from Oaklawn Cemetery, will be followed by another excavation for additional remains.

“There were 14 of the 19 that fit the criteria for further DNA analysis,” city spokesperson Michelle Brooks said. “These are the ones that will be re-exhumed.”

The 14 sets of remains were sent to Intermountain Forensics in Salt Lake City, Utah, and Brooks said two sets have enough DNA recovered to begin sequencing.

It wasn’t immediately clear how many of the 14 will be exhumed a second time, Brooks said.

The remains will be reburied at Oaklawn, where the previous reburial was closed to the public, drawing protests from about two dozen people who said they are descendants of massacre victims and should have been allowed to attend.

Intermountain Forensics is seeking people who believe they are descendants of massacre victims to provide genetic material to help scientists find potential matches.

The exhumations will be followed by another search for bodies in an area south and west of the areas previously excavated in 2020 and 2021.

None of the remains recovered thus far are confirmed as victims of the massacre in which more than 1,000 homes were burned, hundreds were looted and a thriving business district known as Black Wall Street was destroyed. Historians have estimated the death toll to be between 75 and 300.

Victims were never compensated, however a pending lawsuit seeks reparations for the three remaining known survivors of the violence.

The latest search is expected to end by Nov. 18.