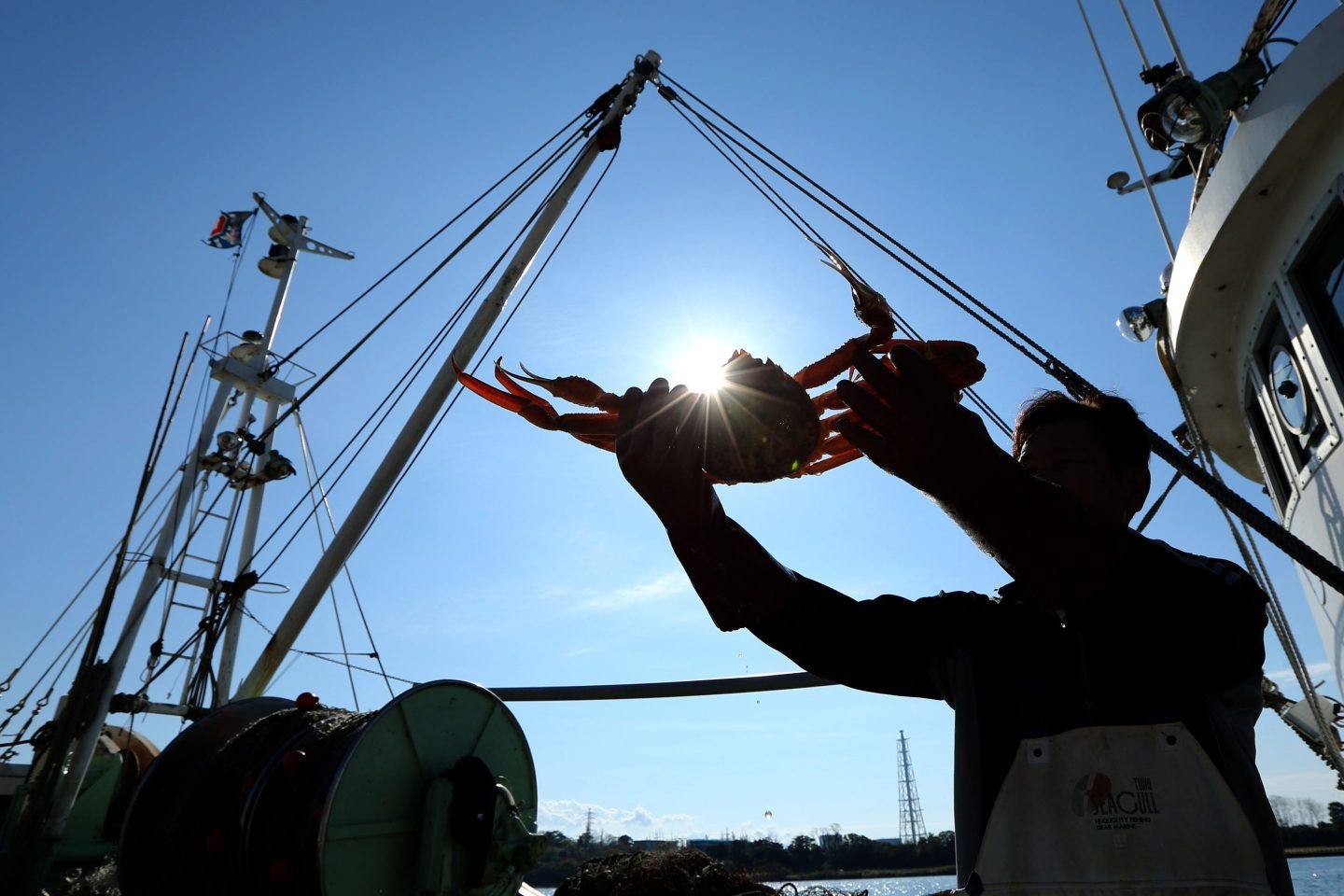 Alaskan officials recently canceled the Bering Sea snow crab season for the first time ever after scientists discovered an unprecedented decline in crab numbers. Climate change is the number one suspect in the dropoff.

“We’re still trying to figure it out, but certainly there’s very clear signs of the role of climate change in the collapse,” said Michael Litzow, shellfish assessment program manager at the National Oceanic and Atmospheric Administration (NOAA), which runs an annual survey of Bering Sea snow crab numbers. (Snow crabs are also found in the Beaufort and Chukchi seas off Alaska.)

The decision to cancel, announced by the Alaska Department of Fish and Game on October 10, came as a devastating blow for local fisheries in a state where the seafood industry is an economic cornerstone. Commercial landings last year of Alaska snow crab alone came to 44 million pounds and $219 million, according to NOAA data.

The bad news didn’t end there. State officials also announced the cancellation of the Bristol Bay red king crab season for the second year in a row because of consistently low crab numbers.

The Alaskan commercial crabbing fleet “is bracing for half a billion dollars in losses going into the second year of stock collapse,” the Alaska Bering Sea Crabbers trade association said in a press release, plus more ripple-effect losses in revenue to processors, support businesses and communities. The trade association represents about 60 vessels and 350 fishermen.

The Alaskan crab crisis is complicated, in part because the situations for the two different crab populations are quite different. Let’s start with the Bering Sea snow crabs, which have declined by “multiple billions” over just a few years, according to Litzow.

Back in 2018, the NOAA-run annual survey revealed the population was booming. “We were looking at the largest amount of small crab” — i.e., young crabs — “in the water that we’ve ever seen in the survey,” said Ethan Nichols, assistant area management biologist at the Alaska Department of Fish and Game. “There was a lot of hope and anticipation” that this would translate to more commercial fishing in the area for years to come, he added.

But the 2019 survey revealed a much reduced population of small crabs, and the 2020 survey was nixed because of the Covid-19 pandemic. “Then in 2021, we went out, and there was just nothing,” said Litzow. There were just enough adult crabs to meet the regulatory threshold to keep the commercial crabbing season open. But with so few smaller crabs around, the outlook for 2022 was grim. This year’s survey only confirmed that, resulting in the closure of the snow crab season for the first time.

It’s not entirely clear not what happened to all the snow crabs, but climate change is thought to be a big contributor. The Bering Sea water temperatures were much warmer than average in 2018 and 2019, contributing to low sea-ice cover levels. Snow crabs are coldwater animals, explained Litzow, and “they’re sensitive to the loss of sea ice and really warm temperatures.”

“There are some signs of another wave of really small crabs coming into the survey, and so looking out four to five years from now, those crabs, if they survive, would be coming into the fishery. So that’s the bright news,” Litzow said. “But if you’re trying to pay off a boat loan or keep a team employed, five years is a really long time.”

In contrast, the Bristol Bay red king crabs have been in steady decline for years. Specifically, the number of young or small crabs has been low for years and the reason why is more of a mystery. “We really don’t know,” said Litzow.

Although it’s possible that warming ocean waters and low sea-ice cover are contributing to the declines in king crab as well, these crustaceans are less sensitive to temperature changes than snow crabs. For red king crabs and snow crabs alike, however, one big question is whether and how much aggressive commercial fishing has impacted population levels.

State rules stipulate there have to be at least 8.4 million mature females for the red king crab season to go forward. But the mature female population was just below the threshold this year and last year, as well as a few other times over the past four decades, prompting season closures. “We’re hoping that not fishing on the stock or possibly the cooler ocean temperatures that we are currently in will help stabilize the population,” said Nichols.

For now, Alaskan fisheries are in trouble and there’s no immediate end in sight. “We’re going to have to let people go because there’s no work,” Andy Hillstrand said in a statement of his fishing boat F/V Time Bandit, which has been featured on the TV series Deadliest Catch, “and we’ve lost the ability to make money for the upkeep of the vessel.”