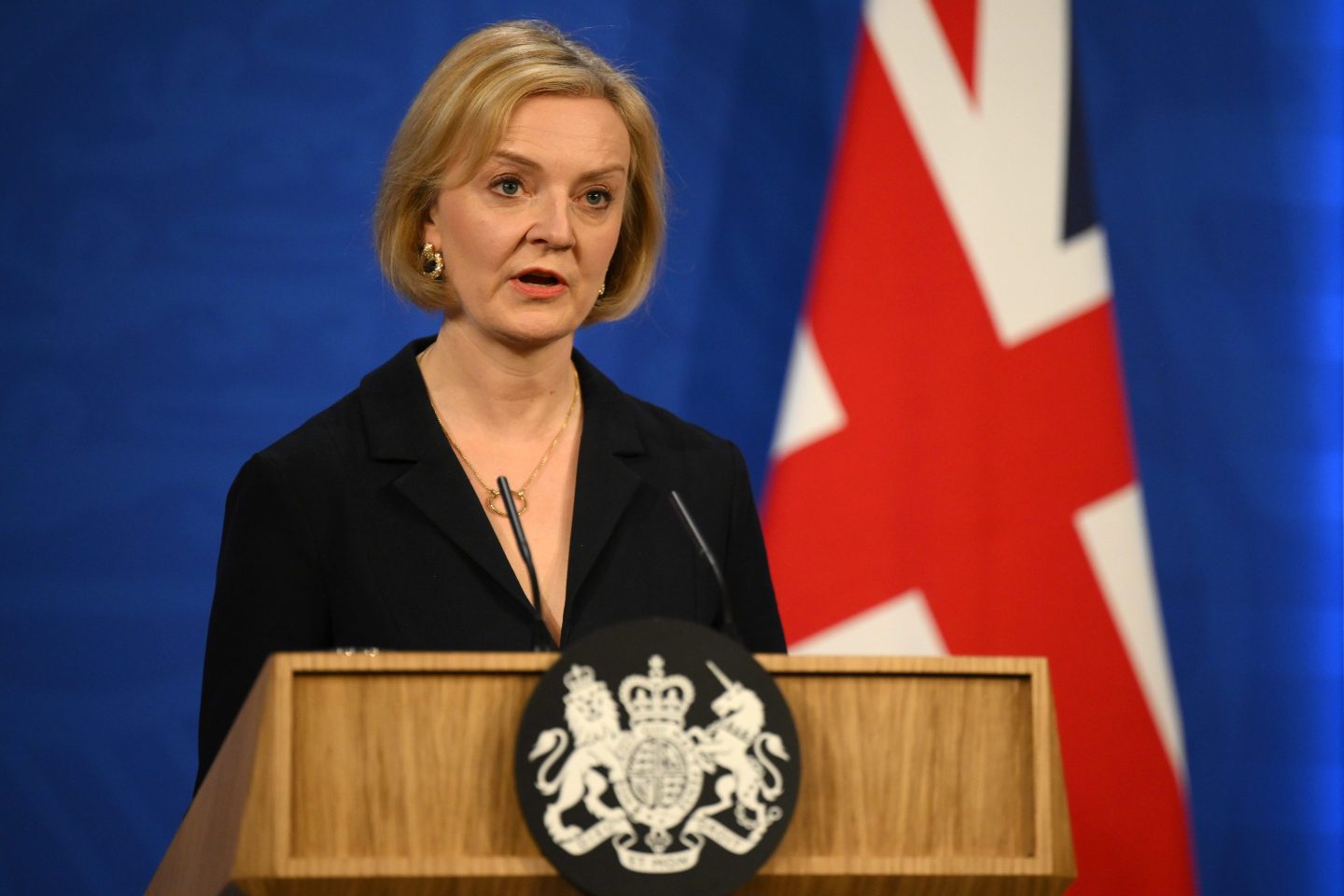 Liz Truss scrapped her plan to freeze corporation tax next year in another dramatic U-turn, hours after she fired her ally Kwasi Kwarteng and replaced him with Jeremy Hunt as UK Chancellor of the Exchequer.

The humiliating reversal follows three weeks of market turmoil since Sept. 23, when Kwarteng announced a massive program of unfunded tax cuts. Faced with no detail on how the government could make the sums add up, traders drove the pound to a record low against the dollar and forced the Bank of England into an emergency intervention to support the bond market.

“It is clear that part of our mini budget went further and faster than the markets were expecting,” Truss said Friday in a short press conference. “So the way we are delivering our mission right now has to change.”

Truss’s decision means corporation tax will now rise to 25% from 19% next year, as had been planned by her predecessor, Boris Johnson and his chancellor, Rishi Sunak. The prime minister also said that spending will “grow less rapidly than previously planned.” She’ll now hope her about-turn — which she said is worth £18 billion a year to the public purse — along with Hunt’s appointment, will be enough to soothe the market jitters.

“What I’ve done today is made sure that we have economic stability in this country,”Truss said. “Jeremy Hunt as chancellor is somebody who shares my desire for a high-growth, low-tax economy. But we recognize because of current market issues, we have to deliver the mission in a different way.”

The move follows the reversal by Truss and Kwarteng last week of another of their measures, a plan to abolish the 45% rate of income tax levied on the UK’s top earners. Truss expects Hunt to commit to carrying out no further U-turns on her economic plans, according to a person familiar with the matter, who asked not to be named discussing private deliberations.

Her position hangs in the balance after less than three weeks in office, with members of her own Conservative Party openly plotting against her. Far from strengthening her hand, Truss’s nervous performance in the press conference has made it less likely that she survives as prime minister, according to three Conservative MPs who spoke on condition of anonymity.

One pointed to a lack of detail about her tax plans and another expressed astonishment she only devoted eight minutes to explain her decision to fire her chancellor. The third predicted she will be gone within weeks — if not days.

Truss’s reversal is also a victory of sorts for Bank of England Governor Andrew Bailey, after the central bank was forced into the contradictory position of buying bonds to shore up the gilt market while raising rates to try to rein in inflation.

This week, Bailey reiterated that the emergency program would end as planned on Friday, putting the BOE’s credibility on the line in the face of pressure to extend the purchases. The ongoing market jitters appear to have forced the government into changing its mind on tax.

Kwarteng earlier posted his resignation letter on Twitter, saying the premier had asked him to go. The two politicians had portrayed themselves as being in lockstep on the economy, and had staked their reputations on an all-out push for growth when the now former chancellor announced his economic strategy on Sept. 23.

“We share the same vision for our country and the same firm conviction to go for growth,” the premier wrote in her reply to Kwarteng, which was emailed by her office.

Hunt is seen as a calm, sober pair of hands who may be able to soothe the markets. He was a long-serving cabinet minister under former prime ministers David Cameron and Theresa May, running the health department for almost six years before becoming foreign secretary for a year.

He has since re-branded himself as a crusading backbencher, chairing the health and social care select committee since 2020. Most recently he’s won headlines by grilling ministers and officials over the government’s much-criticized response to the Covid pandemic.

After being runner-up in the Tory leadership contest to succeed May, Hunt threw his hat into the ring again to replace Johnson in July, but lost in the first round of voting.

Hunt now has just over two weeks to prepare a medium-term fiscal plan scheduled for Oct. 31 to show how the government will get debt falling as a proportion of economic output.

After the corporation tax U-turn, the government may still need to do more. An analysis by Bloomberg Economics shows about £24 billion more savings or revenue raising is needed to put debt back on a sustainable track.

It could find another £8 billion from reversing changes to stamp duty, VAT-free shopping for tourists and some working rules, said economists Jamie Rush and Dan Hanson. Scrapping the planned 1 percentage point reduction in the basic rate of income tax would generate another £6 billion.

Hunt will also have difficult decisions to make on spending after Truss said it’ll rise by less than planned. With inflation close to a four-decade high, that points to real-term cuts to departmental spending that’s already been squeezed by Tory cuts over the past 12 years.