The world’s coffee-drinking, outdoorsy millennial leaders hit the UN (but you won’t find any from the U.S.) 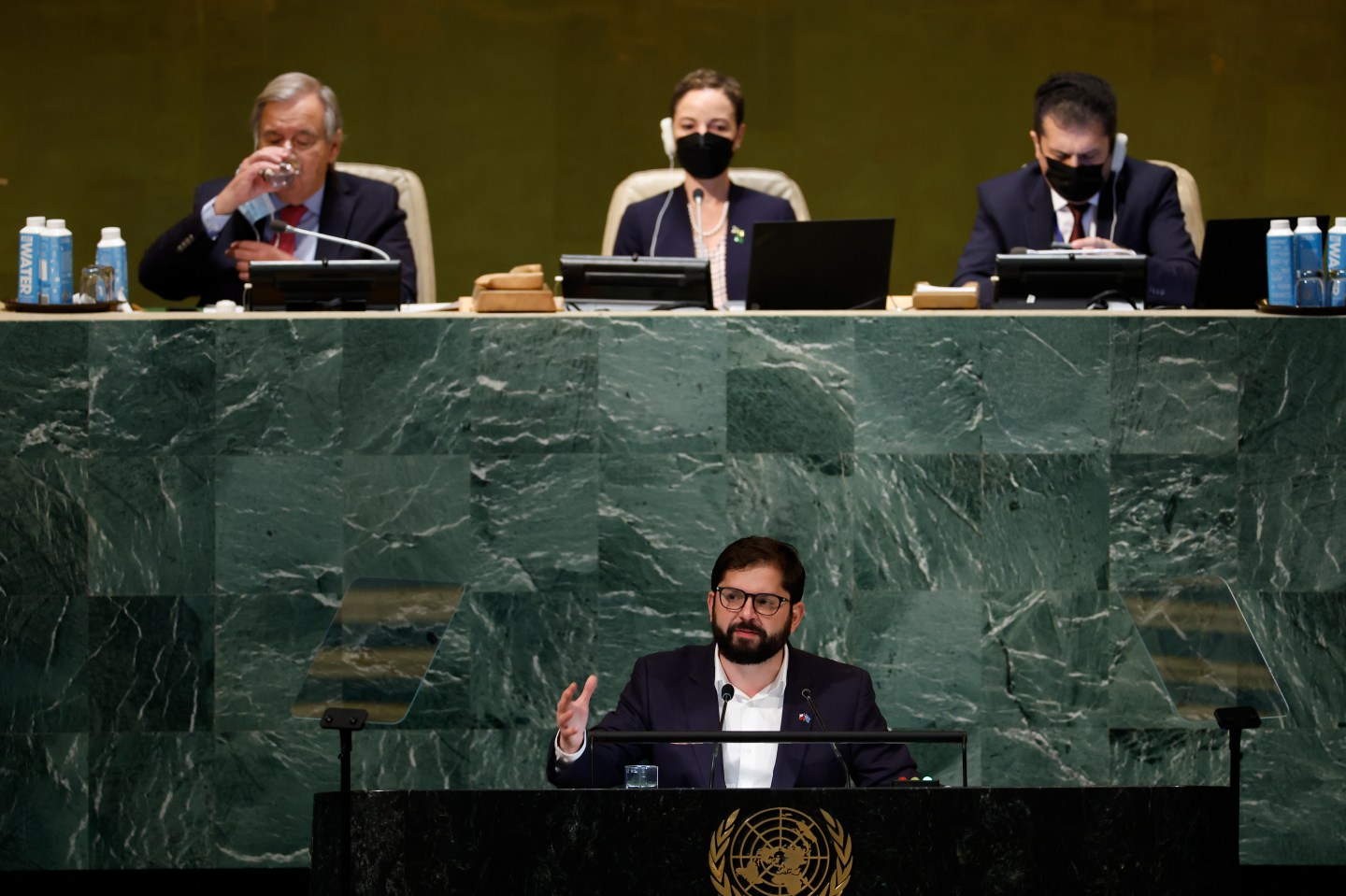 A young president at the U.N. General Assembly touted millennial status symbols like coffee, outdoor adventure and Bitcoin. Another admitted in front of the famous green marble that it was harder to govern a country than to protest in its streets. A foreign minister, once shunned for having only a bachelor’s degree, warned against indifference.

Shaped by the borderless internet, growing economic inequality and an increasingly dire climate crisis, the Generation Y cohort of presidents, prime ministers, foreign ministers and other “excellencies” is making their mark at the largest gathering of world leaders.

This week at the United Nations offers a glimpse of the latest generation of leaders in power, as a critical mass of them—born generally between 1981 and 1996—are coming to represent countries in the Americas, Europe, Asia and Africa.

Some millennial leaders were making their debuts at the 77-year-old diplomatic institution built in the aftermath of WWII, while there were other notables who didn’t show up but had already arrived on the world stage. Those include Kim Jong Un, who took over the reclusive North Korea in his 20s, and the 36-year-old Finnish Prime Minister Sanna Marin, who faced controversy recently for a video of her dancing at a private party that went viral.

Jennifer Sciubba, an author and political demographer affiliated with the Wilson Center, a Washington, D.C.-based think tank, said many came into power buoyed by their generation’s disaffection for the status quo, and in that sense millennials and baby boomers are echoes of each other. One stark difference: Life by most measures was getting better after WWII, yet many young people today don’t harbor the same hope.

“A mistake would be to say, ‘Younger generations, they’re more liberal,’ and therefore we’ll see a turn to the left as these people come to the age of influence,” Sciubba said “They’re not monolithic. Dissatisfaction with the status quo—it can show up on either end of the political spectrum.”

Sciubba also noted that it was merely a matter of time before the millennials took their place in the world order. She said the definition of generations are “arbitrary, shorthand for us to understand people.” That’s a truth evident on the U.N. stage, where differing ideologies from the same Gen Y were on full display.

On Tuesday during the first day of the General Assembly, two young presidents shattered that myth of the millennial monolith when they spoke of their contrasting plights.

There was the 36-year-old president of Chile, Gabriel Boric, who used his air time to lick his wounds after citizens overwhelmingly rejected a new progressive constitution he had championed.

“As a young person who was on the street protesting not very long ago, I can tell you that representing unrest is a lot easier than producing solutions,” Boric said.

The failed proposal was set to replace a dictatorship-era constitution with a new charter that would have fundamentally changed the country to include gender equality, environmental protections and Indigenous rights. The stinging loss was not unexpected, with supporters blaming misinformation online for eroding support for it.

Chile’s youngest-ever president said the lesson he learned was that democracy is humbling.

“With great humility, I wish to tell you today that a government can never feel defeated when the people speak,” Boric said. “Because unlike in the past, when differences in Chile were settled through blood and fire, today, Chileans have agreed to face our challenges in a democratic fashion. And I’m telling you about this because I’m certain that one of the major challenges for humanity today is that of building democracies that really talk to and listen to citizens.”

Meanwhile, the selfie-loving El Salvador President Nayib Bukele—his glamorous wife and young daughter in the audience—said wealthy countries should not interfere with developing nations trying to chart their own paths. His speech came just days after the 41-year-old was accused of pushing toward authoritarianism when he announced he would seek re-election despite a constitutional ban.

In thinly veiled language and metaphor, Bukele pushed back against criticism his administration has received from the United States and European Union for concentrating power and more recently suspending some constitutional rights under an ongoing six-month state of exception.

“Because while on paper we are free and sovereign and independent, we will not really be so until the powerful understand that we want to be their friends, that we admire them, that we respect them, that our doors are wide open to trade, for them to visit us, to build the best possible relations,” said Bukele, whose current term ends in 2024. “But what they can’t do is come to our house to give orders – not only because it’s our house, but because it makes no sense to undo what we’re doing.”

Bukele, who is highly popular at home and on social media, later tweeted a video of his appearance on the conservative U.S. cable channel Fox News. The young president talked about his crackdown on powerful street gangs in which more than 50,000 people have been arrested. Recent polls have shown his actions have broad support even as human rights organizations within El Salvador and abroad say people are being arrested and jailed without evidence.

Rosario Diaz Garavito, the founder of The Millennials Movement, an NGO that works to engage young people in Latin America on the U.N.’s goals, said the diverging leaders both deftly disrupted the usual party politics at home and have proven to be among the most polarizing leaders in the region at a time when multilateralism should be embraced.

“We tend to go from the right wing to the left wing—all the time. And this is actually separating us,” Diaz Garavito said. “They have shown they can think differently, in different ways, but we need to now be able to find common ground as a region.”

Another thing united them: Neither wore a tie, opting for more causal attire to speak from the General Assembly podium, a place where virtually all male leaders stick to suits with ties or national dress.

As the first generation of digital natives, one constant theme in the political fortunes and misfortunes of millennial leaders emerged in the praise and peril of the internet and social media.

On Wednesday, Czech Republic Foreign Minister Jan Lipavský spoke at length about Russia’s war on Ukraine, and he also lamented how online disinformation was plaguing society while urging for “digital humanism” and solutions to preserve human rights on the internet.

“A lie is not an opinion. For far too long, we have overlooked the spread of disinformation directed against our common values,” Lipavský said. “Let us not forget the COVID-related disinformation. We had to learn the hard way when disinformation began to cost human lives.”

Just last year, the 37-year-old faced opposition from the country’s longtime president, who declared he didn’t want to appoint Lipavsky because of Lipavsky’s reserved attitude toward Israel.

What’s more, he noted, the millennial leader had only a bachelor’s degree.