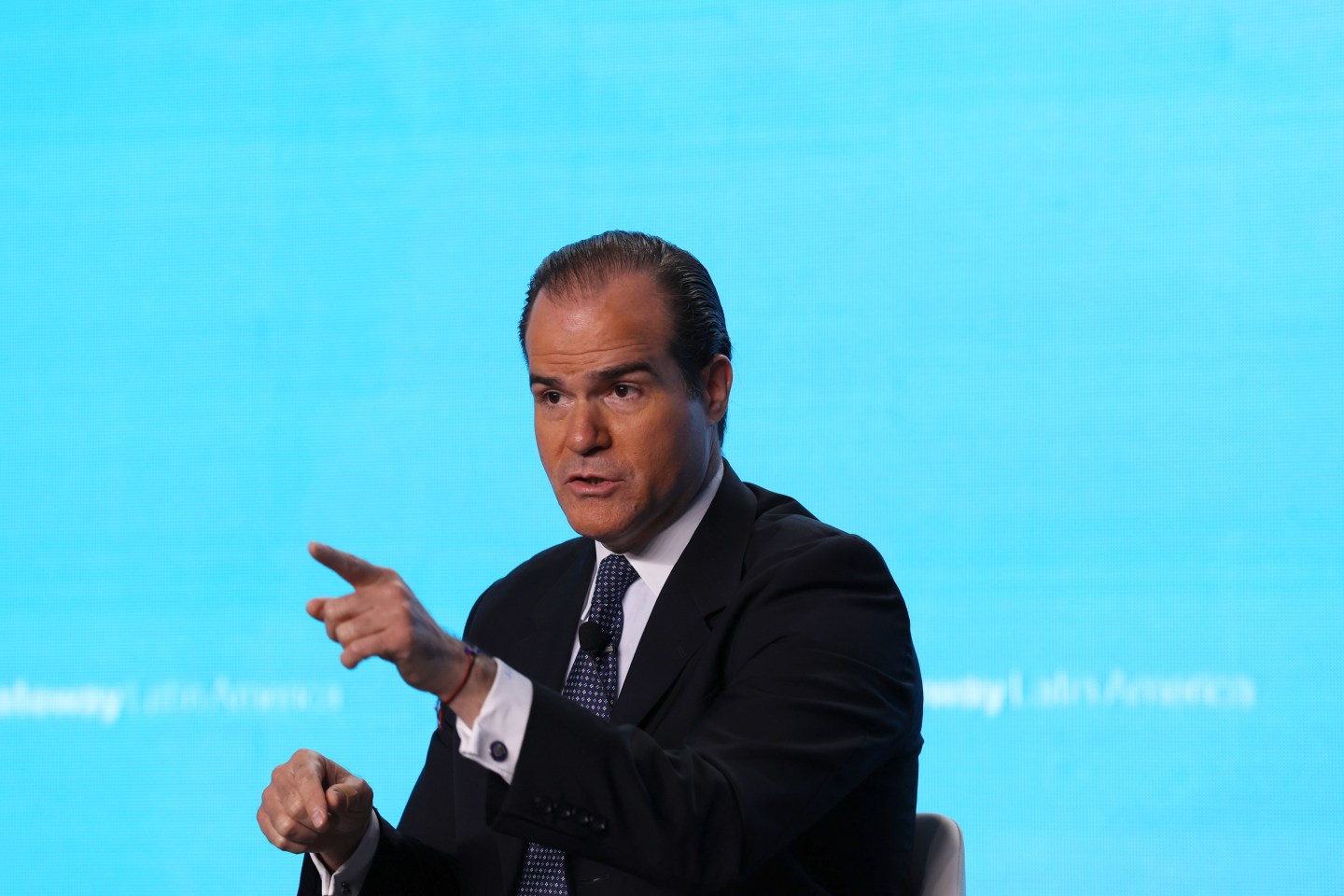 MIAMI (AP) — Investigators say they found evidence a former Trump official who heads Latin America’s biggest development bank carried on a romantic relationship with his chief of staff — a bond they allegedly forged in a pact scribbled on the back of a restaurant place mat: “We deserve absolute happiness.”

The Associated Press obtained a confidential report by a law firm hired by the Inter-American Development Bank’s board to investigate an anonymous complaint of misconduct against its president, Mauricio Claver-Carone.

Investigators said it is reasonable to conclude the relationship between the two existed since at least 2019, when both held senior positions on the National Security Council. They said the purported relationship prompted one U.S. official at the time to warn that it posed a counterintelligence risk.

Exhibit A in the 21-page report is a “contract” that the two purportedly drew up on the back of a place mat in the summer of 2019 while they dined at a steakhouse in Medellin, Colombia. Both were there attending the annual meeting of the Organization of American States.

In it, they allegedly outline a timeline for divorcing their spouses and getting married. There is also a “breach clause” stating that any failure to fulfill the terms would bring “sadness and heartbreak” that could only be mitigated by “candlewax and a naughty box” from an oceanfront hotel in Claver-Carone’s native Miami.

“We deserve absolute happiness. May only God part w/ this covenant,” according to the contract, a photo of which was provided to investigators by the woman’s former husband, who told investigators he found the place mat in her purse when she returned from the trip.

The purported contract is one of several details in the report that have Claver-Carone fighting to save his job. They include allegations he had a 1 a.m. hotel room rendezvous with his chief of staff, sent her a poem on a Sunday morning titled “My Soul is in a Hurry” and — perhaps most troubling — awarded her 40% pay raises in violation of the bank’s conflict-of-interest policies.

Claver-Carone has disputed the report’s accuracy, strongly denouncing the manner in which the review was conducted and offering no hint that he is considering resignation.

According to investigators, he has denied ever having — now or before — a romantic relationship with his longtime right hand.

His chief of staff denied the allegations in the anonymous complaint and told investigators she never violated the IDB’s code of ethics, the report said. In a written submission to investigators, she also complained that she had been denied due process.

The AP isn’t naming Claver-Carone’s aide because the report, which is labeled “confidential,” hasn’t been made public.

“Neither I nor any other IDB staff member has been given an opportunity to review the final investigative report, respond to its conclusions, or correct inaccuracies,” Claver-Carone said in a statement Tuesday.

The findings recall accusations of ethical lapses against another Republican atop a multilateral institution, former Secretary of Defense Paul Wolfowitz, who resigned as head of the World Bank in 2007 for arranging a generous pay raise for his girlfriend.

The Inter-American Development Bank is the biggest multilateral lender to Latin America, disbursing as much as $23 billion every year in efforts to alleviate poverty in the region.

Representatives of the bank’s 48 members met Wednesday to discuss the report but it was unclear what action, if any, they might take.

The U.S. is the largest shareholder in the Washington-based bank and some inside the White House have made no secret of their dislike for Claver-Carone, whose election as IDB chief in the final months of the Trump presidency broke with tradition that a Latin American head the bank.

A spokesman for the U.S. Treasury Department said it is closely reviewing the report and takes all ethics allegations at international financial institutions seriously.

The Biden-Harris Administration is committed to the IDB’s mission of addressing the most pressing issues in Latin America and the Caribbean, and to building a sustainable, resilient, and equitable future for people throughout our region.”

Some of the more salacious claims referenced in the report could not be substantiated by New York-based Davis Polk. The law firm also found no evidence that Claver-Carone knowingly broke the bank’s travel policies to cover up a romantic relationship, or retaliated against any bank employees, as was alleged in an anonymous complaint sent in March to the bank’s board.

Still, Davis Polk harshly criticized Claver-Carone and his chief of staff for failing to cooperate fully with their investigation — considering it a violation of bank policies and principles.

For example, the report said Claver-Carone failed to hand over his bank-issued mobile phone for analysis although he did provide a forensic report conducted by a consultant. Claver-Carone also didn’t share messages from his personal phone or Gmail account with his chief of staff, the report said.

“Particularly in light of their failure to cooperate, it would be reasonable to conclude that the evidence of a prior relationship, and the additional circumstantial evidence of a current relationship while they were both at the Bank, constitute a violation of the applicable Bank policies,” the report said.

Davis Polk’s report said Claver-Carone raised his aide’s pay by 40% within a year. It said that one of the raises and a change of title was ordered by Claver-Carone a day after an email exchange in which she complained about not getting sufficient respect from her co-workers.

“You figure it out. It’s your bank,” she wrote, according to the report.

Davis Polk, which also conducted the investigation that led to Andrew Cuomo’s resignation as governor of New York, faulted Claver-Carone for making employment decisions about someone with whom it believes he had been romantically involved. However, it said that other executives received similarly-sized increases and his chief of staff’s current salary of $420,000 is in line with her predecessor’s compensation.

Claver-Carone when confronted with photographs of the purported place mat “contract” during an interview this month told investigators that he had never seen the document and denied it was his handwriting or signature. He stated that the document was fraudulent and part of a scheme by his aide’s ex-husband to harm her.

In a letter to the bank’s general counsel, seen by AP, divorce lawyers for the chief of staff said her former husband had a history of cruelty and revenge that was raised in divorce proceedings. They said any evidence he supplied investigators should not be deemed credible.

However, two independent handwriting experts, one who previously worked for the FBI, concluded there was a high probability that the handwriting on the place mat — excerpts of which are displayed in the report — match Claver-Carone’s penmanship in bank documents. Claver-Carone refused to submit a handwriting sample as part of the probe, the report said.

AP writer Fatima Hussein contributed to this report from Washington.