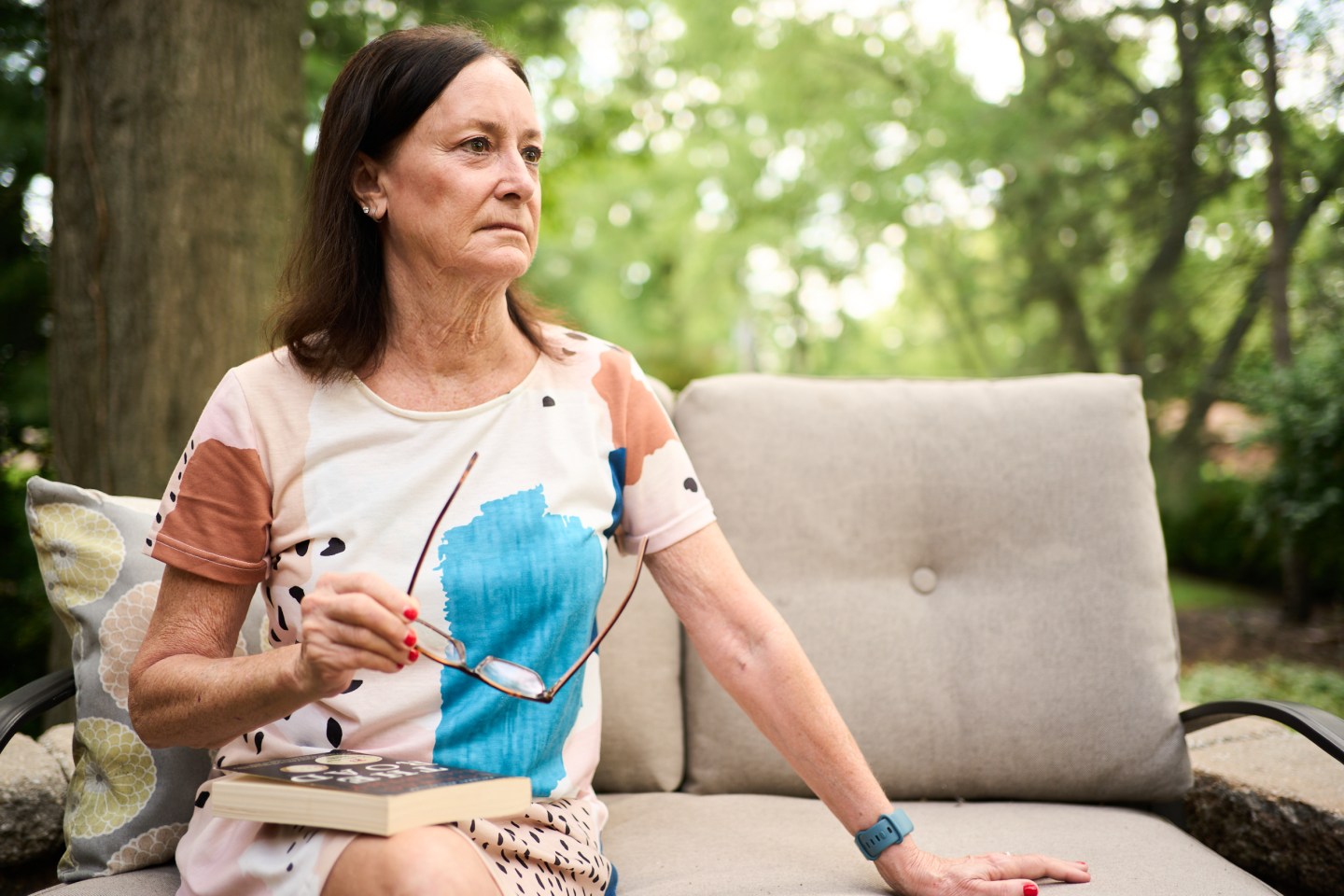 Christina Green’s 2019 cataract surgery at private equity-backed Ophthalmology Consultants in St. Louis didn’t get her to 20/20 vision or fix her astigmatism, she says — despite a $3,000 out-of-pocket charge for the astigmatism surgical upgrade. Green, a former English professor, says she felt more like a dollar sign than a patient.
Matt Kile for KHN

ST. LOUIS — Christina Green hoped cataract surgery would clear up her cloudy vision, which had worsened after she took a drug to fight her breast cancer.

But the former English professor said her 2019 surgery with Ophthalmology Consultants didn’t get her to 20/20 vision or fix her astigmatism—despite a $3,000 out-of-pocket charge for the astigmatism surgical upgrade. Green, 69, said she ended up feeling more like a dollar sign to the practice than a patient.

Ophthalmology Consultants is part of EyeCare Partners, one of the largest private equity-backed U.S. eye care groups. It is headquartered in St. Louis and counts some 300 ophthalmologists and 700 optometrists in its networks across 19 states. The group declined to comment.

Switzerland-based Partners Group bought EyeCare Partners in 2019 for $2.2 billion. Another eye care giant, Texas-based Retina Consultants of America, was formed in 2020 with a $350 million investment from Massachusetts-based Webster Equity Partners, a private equity firm, and now it says on its website it has 190 physicians across 18 states. Other private equity groups are building regional footprints with practices such as Midwest Vision Partners and EyeSouth Partners. Acquisitions have escalated so much that private equity firms now are routinely selling practices to one another.

In the past decade, private equity groups have gone from taking over a handful of practices to working with as many as 8% of the nation’s ophthalmologists, said Dr. Robert E. Wiggins Jr., president of the American Academy of Ophthalmology.

They are scooping up eye care physician practices nationwide as money-making opportunities grow in medical eye care with the aging of the U.S. population. Private equity groups, backed by wealthy investors, buy up these practices—or unify them under franchise-like agreements—with the hopes of raising profit margins by cutting administrative costs or changing business strategies. They often then resell the practices at a higher price to the next bidder.

The profit potential for private equity investors is clear: Much like paying to upgrade plane seats to first class, patients can choose expensive add-ons for many eye procedures, such as cataract surgery. For example, doctors can use lasers instead of cutting eye lenses manually, offer multifocal eye lenses that can eliminate the need for glasses, or recommend the astigmatism fix that Green said she was sold. Often, patients pay out-of-pocket for those extras—a health care payday unconstrained by insurance reimbursement negotiations. And such services can take place in outpatient and stand-alone surgery centers, both of which can be more profitable than in a hospital setting.

The investments that private equity groups provide can help doctors market and expand their practices, as well as negotiate better prices for drugs and supplies, Wiggins said. But he warned that private equity companies’ quest to maximize profitability runs the risk of compromising patient care.

“The problems are accumulating and driving up prices,” added Aditi Sen, director of research and policy at the nonprofit Health Care Cost Institute, which provides data and analysis about the economics of health care.

Yashaswini Singh, a health economist at Johns Hopkins University, and her colleagues analyzed private equity acquisitions in ophthalmology, gastroenterology, and dermatology and found that practices charged insurance an extra 20%, or an average of $71, more after the acquisition. Private equity-owned practices also saw a substantial rise in new patients and more frequent returns by old patients, according to their research, published Sept. 2 in the JAMA medical journal.

A KHN analysis also found that private equity firms are investing in the offices of doctors who prescribe at high rates two of the most common macular degeneration eye drugs, meaning the doctors are likely seeing high volumes of patients and thus are more profitable.

“The private equity model is a model that focuses on profitability, and we know they are not selecting practices randomly,” Sen said.

She noted that the volume of patients would be attractive to private equity, as well as the idea of investing in practices utilizing expensive Lucentis prescriptions, which cost roughly $1,300 an injection. Furthermore, she said, after being acquired by private equity, doctors could potentially change their prescription habits from the cheaper Avastin that costs about $40 to Lucentis – improving the bottom line.

Retina Consultants of America did not respond to requests for comment.

Last summer, Craig Johnson, then 74, decided it was finally time to have cataract surgery to fix his deteriorating eyes. He decided to go to CVP Physicians in Cincinnati, calling it “the cream of the crop locally for having eye surgery” as they do “100 a day.” The practice was already part of a private equity investment but has since been acquired by another investor, behemoth EyeCare Partners, for $600 million.

Johnson, while happy with the results of his surgery, did not know about the manual cutting version of the surgery—the cheaper but just as effective alternative to using a laser. Johnson was using private insurance because he was still working, and he said that resulted in over $2,000 out-of-pocket charges for each eye. Laser surgery typically costs more than manual and may not be covered by insurance plans, according to the American Academy of Ophthalmology.

Johnson explained that a salesperson, as well as a physician, walked him through options to improve his eyesight.

“Seniors are a vulnerable population because they’re on a fixed income, they’re a little older, they trust you … you’re wearing a white coat,” said Dr. Arvind Saini, an ophthalmologist who runs an independent practice in California’s San Diego County.

Christina Green’s 2019 cataract surgery at private equity-backed Ophthalmology Consultants in St. Louis didn’t get her to 20/20 vision or fix her astigmatism, she says — despite a $3,000 out-of-pocket charge for the astigmatism surgical upgrade. Green, a former English professor, says she felt more like a dollar sign than a patient.
Matt Kile for KHN

Many patients have no idea whether private equity investors have a stake in the practices they choose because they are often referred to them by another doctor or are having an eye emergency.

David Zielenziger, 70, felt lucky to get a quick appointment at one of Vitreoretinal Consultants of NY’s practices after his retina detached. Zielenziger, a former business journalist, didn’t know it was associated with Retina Consultants of America. He loved his doctor and had no complaints about the emergency care he received—and continued to go there for follow-ups. Medicare covered just about everything, he said.

“It’s a very busy practice,” he said, noting that it has expanded to more locations, which must be making the investors happy.

In 2018, Michael Kroin co-founded Physician Growth Partners, a group that helps doctors sell their practices to private equity firms, to capitalize on the explosion of interest. Eye care is one of the largest areas of investment, he said, because the specialty health care services apply to such a broad market of people.

Sixteen of the 25 private equity firms identified by industry tracker PitchBook as the biggest health care investors have bought stakes in optometry and ophthalmology practices, a KHN analysis found.

Kroin expects private equity investment in practices will only continue to accelerate because of competition from the “1,000-pound gorilla” of hospitals that also are acquiring practices and as the bureaucracy of insurance reimbursement forces more physicians to seek outside help. “If you’re not growing, it’s going to be tough to survive and make a similar level of income as you had historically,” he said.

Some health care experts worry that private equity companies could eventually be left holding an overly leveraged bag if other firms don’t want to buy the practices they’ve invested in, which could lead to the closures of those practices and ultimately even more consolidation.

“I’m not sure that most physician practices are so inefficient that you can get 20% more profit out of them,” said Dr. Lawrence Peter Casalino, chief of the division of health policy and economics at Weill Cornell Medicine’s Department of Population Health Sciences. And, he said, investors count on reselling to a buyer who will pay more than what they paid. “If that doesn’t work, the whole thing unravels.”