Millionaires are on the move, and this report on the world’s top 20 millionaire cities shows where they’re going next 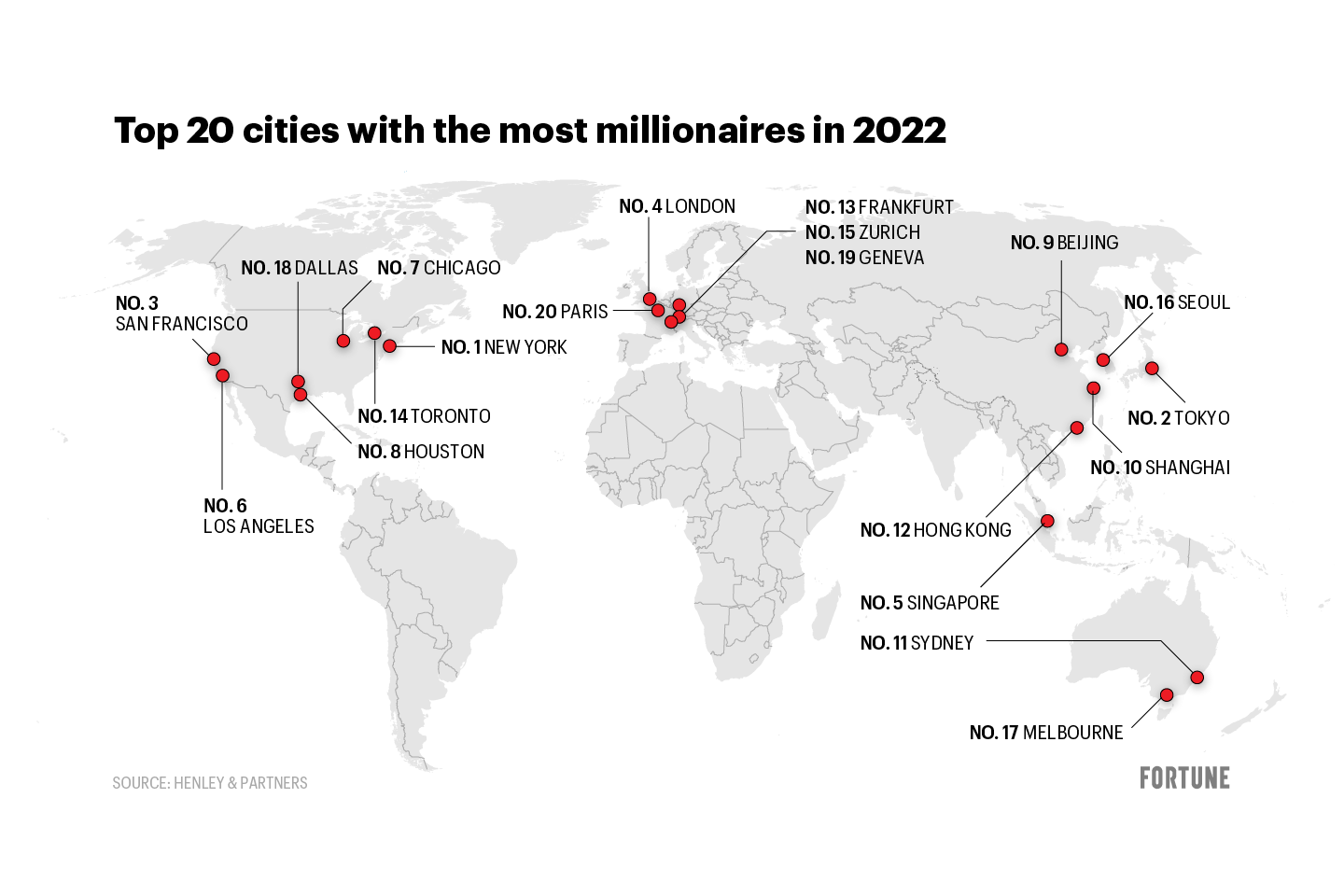 Where do all the millionaires live? Increasingly, not where they used to.

Henley & Partners, which calls itself an investment migration consulting firm, and it just released its Global Citizens Report in partnership with the wealth intelligence firm New World Wealth, showing the top 20 millionaire cities in the world.

It’s no surprise that New York City is number one on the list, but it might be a surprise that Gotham lost 12% of its millionaires in the first six months of this year, yet still had tens of thousands more millionaires than the second-highest placed city (Tokyo).

Another surprise might be that the San Francisco Bay area, which has been hit so hard by remote work, saw a 4% increase in millionaires. It seems that tech wealth is leaving the offices of San Francisco, but not the area at all (the list includes Silicon Valley).

So where are millionaires moving outside the east and west coast, and outside the U.S., and what will be number one a decade from now? The report has a lot more to reveal.

The rise of the rest

Besides New York, Los Angeles and London also lost millionaires in 2022. Six percent of L.A.’s millionaires left—but the report said it will likely always be an entertainment hub, with a lot of millionaire actor and musician types. London’s weakness, on the other hand, could be a grim portent for the U.K.: 9% of its millionaires left, which the report attributed to rising crime rates in the city. London and the EU are both struggling with a cost-of-living crisis related to the war in Ukraine and the ensuing energy crisis.

Hong Kong, 12th on the list, experienced a 14% decline in millionaires—the largest decline among the top 20 millionaire cities, which should be no surprise as Hong Kong saw a flood of exits amid extended COVID lockdowns. Paris, last on the list, saw a similar decline of 12%, despite remaining a top tourist destination.

So they might be moving away from well-known metropolitan cities, but where exactly are they moving to?

Houston, eighth on the list, saw the largest growth in millionaires at 6%. Dallas and Fort Worth saw a 3% increase in millionaires, so it looks like the wealthy are moving to Texas. The report attributes the shift, in part, to many companies that have relocated their headquarters to Texas, generating strong wealth growth.

Additionally, the report listed Austin, West Palm Beach, Houston, Greenwich, and Miami in a separate category showing the 25 fastest growing cities in the world—each saw 5% or more increases in the number of millionaires. Austin saw the largest increase, at 14%.

Europe didn’t stand out much, with Geneva and Paris ranking in the bottom two of the millionaire cities list, and Frankfurt and Zurich coming in at 13th and 15th on the list, respectively. Europe’s fast-growing cities were mostly in Switzerland and France, showing that the concentration of European wealth remains consistent.

Tokyo, Singapore, Beijing, and Shanghai were all ranked in the top 10, but each city apart from Singapore saw a decrease in millionaires ranging from 5% to 8%. Smaller Chinese cities are rising fast, with Hangzhou and Shenzhen seeing millionaire increases of 10% and 9%, respectively.

The story at this stage of the pandemic is that the rich cities are getting a little less rich as time goes on, and the rest are catching up.