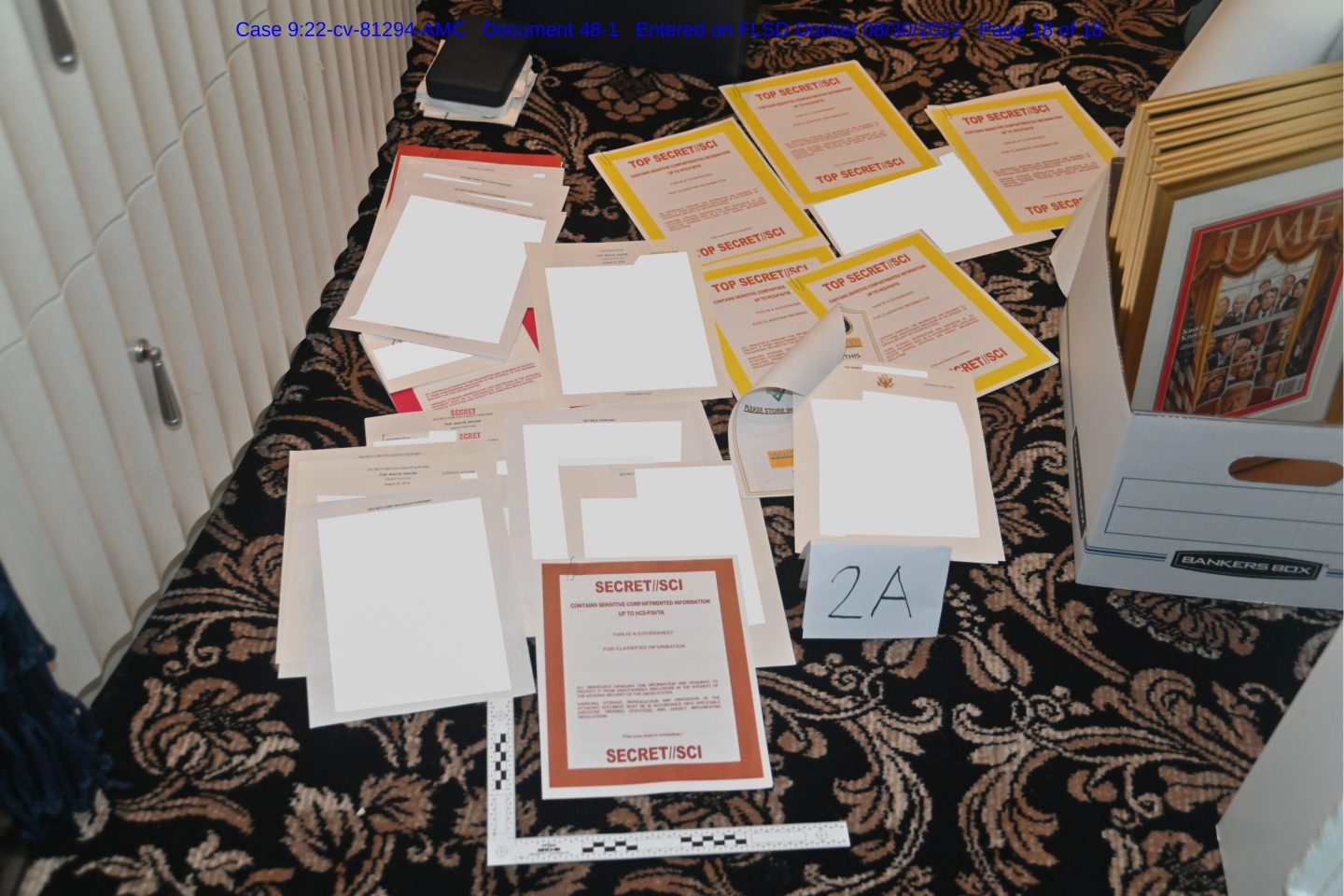 The Department of Justice filing to a federal court late Tuesday, which includes a photograph of the documents, makes the accusation that someone at Trump’s Florida estate may have tried to remove papers before an FBI visit to the property in June following a grand jury subpoena.

That signaled possible obstruction and helped the FBI secure a warrant to carry out the unprecedented Aug. 8 search of Mar-a-Lago.

A photo the government included in the 36-page filing show papers over a floral carpet bearing the bold red marks of “Top Secret” alongside a gold frame of a Time magazine cover from 2019, though it’s unclear who arranged them that way.

One of the visible documents is dated Wednesday, May 9, 2018, the day after Trump announced the U.S. withdrawal from the Iran nuclear deal.

These indicate that some of the material found at Trump’s Florida home is likely “special access program” material, which is used for specific types of classified information subject to more stringent security measures, according to people who reviewed the Justice Department photo. The department’s affidavit for the search did not mention that level of classification.

The documents also lack markings that indicate the material has been declassified, as Trump has claimed he’d done. If the materials had been declassified, according to the people, the headers on the covers would have been blocked out. The people added that the materials are all on White House letterhead, indicating they were likely generated by National Security Council staff based on information obtained by the intelligence community.

Altogether, these are the types of documents normally found in highly secure facilities known as SCIFs—or Sensitive Compartmented Information Facilities—and the sort of paperwork the U.S. government argued Trump had no authority to take with him when his presidency ended.

The photo was part of the Justice Department’s response to Trump’s lawsuit demanding that the documents be reviewed by a special master. The latest revelations may further undercut enthusiasm among some key supporters to defend the former president’s actions. Normally stalwart backers have stayed quiet or tried to deflect criticism after initially protesting the FBI search as an overreach by DOJ.

Trump has denied wrongdoing but offered no credible explanation for why he had the documents or didn’t return them earlier, as his lawyers claimed. Some of his lawyers, and Trump himself, have suggested without proof that the FBI somehow planted evidence at Trump’s club.

Trump criticized the FBI For displaying the documents on the floor for pictures and suggested it was done to incriminate him.

“Terrible the way the FBI, during the Raid of Mar-a-Lago, threw documents haphazardly all over the floor (perhaps pretending it was me that did it!), and then started taking pictures of them for the public to see,” he wrote on his Truth Social platform. “Thought they wanted them kept Secret? Lucky I Declassified!”

In the Justice Department photo, the documents were laid out alongside letters or memos with White House letterhead that appeared redacted by government investigators, as well as a bankers box containing a framed copy of the cover of Time magazine’s March 4, 2019 issue, featuring Trump in the Oval Office and a slew of potential Democratic rivals looking in through the window.