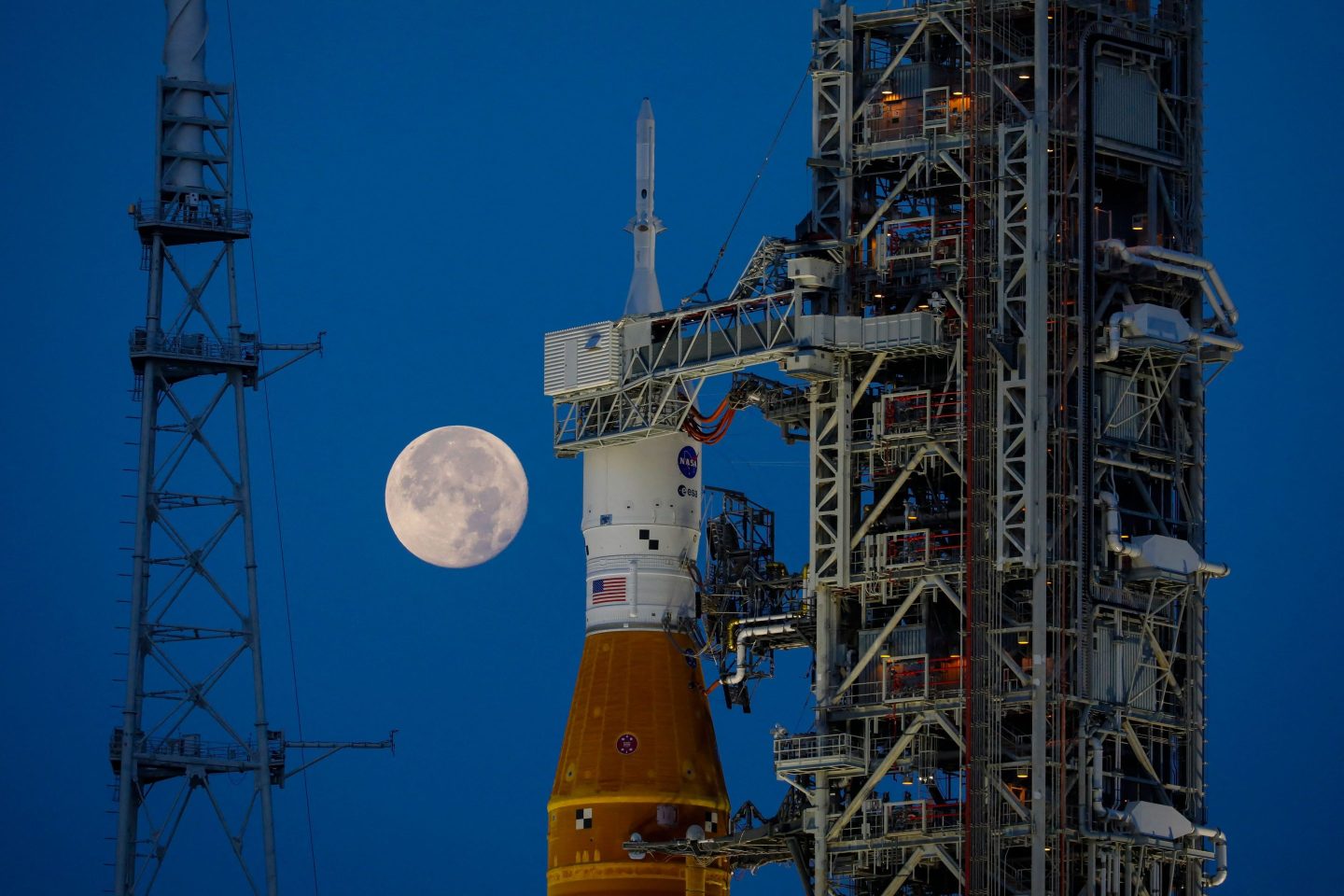 NASA is about to take the first step on its journey to return people to the moon by the end of the decade. If all goes well, a massive uncrewed rocket will lift off from Kennedy Space Center on Monday morning, then circle the moon in an orbit that will take it deep into space before it returns to Earth 42 days later.

The Artemis I mission marks a critical moment for NASA and the space industry. The Artemis program, named for the twin sister of the god Apollo in Greek mythology, aims to land the first woman and the first person of color on the moon as early as 2025. Among the critical components of the mission are the Boeing Co.-built rocket, named the Space Launch System, and the Orion crew capsule made by Lockheed Martin Corp. A future landing vehicle will be supplied by Space Exploration Technology Corp.

The stakes are high for both NASA and its corporate contractors after a decade of development delays and cost overruns. It marks the first time since the end of the Space Shuttle program that NASA has debuted a new flagship vehicle and system geared toward human spaceflight. After the Shuttle was retired, NASA relied on Russia’s Soyuz rocket to get humans to and from the International Space Station and, more recently, has turned to SpaceX’s Falcon 9 rocket and Dragon crew capsule.

The return of NASA to moon missions has followed a long and tortuous path on Earth. Multiple administrations have proposed ambitious human spaceflight programs after the end of Apollo, only to fall victim to budgetary concerns. Artemis, though it has garnered Congressional support to keep going, has been beset by high-profile setbacks.

The Space Launch System has been in development for roughly a decade, slowed by a myriad of delays and cost overruns. More than five years behind schedule, the rocket has seen  its development cost soar from an original $7 billion to about $23 billion, according to an estimate by the Planetary Society. Multiple audits of NASA’s main contractor, Boeing , have criticized the company for its management of SLS, and have highlighted flaws throughout the vehicle’s construction and testing.

NASA and Boeing are tempering expectations ahead of the launch, stressing that Artemis I is a test of a new and highly complex system.

“It’s not without risk,” Jim Free, NASA’s associate administrator for explorations systems development, said during a press conference ahead of the launch. “We have analyzed the risk as best we can, and we’ve mitigated, also, as best we can.”

Even a successful test flight may not be enough to satisfy SLS’s many critics who bemoan the rocket’s high price tag and inefficiency. SpaceX’s planned deep-space Starship spacecraft may prove even more powerful than SLS, as well as cheaper to both develop and launch when it becomes operational. Additionally, Starship is designed to be fully reusable, unlike SLS, which will be expended after each launch.

But Starship has yet to reach orbit and it could be years before the vehicle is ready to carry humans to deep space. Plus, NASA has also contracted SpaceX to develop Starship as a human lunar landing system as part of Artemis. So both SLS and Starship may be seen as in competition to one another, but they will be working together to help return NASA astronauts to the moon.

The SLS is scheduled to take off from launchpad LC-39B at 8:33 a.m. Florida time, lofting the Orion capsule into orbit around Earth. Then a little less than two hours after launch, the upper stage of the SLS will ignite and send Orion on course to the moon. Six days out from launch, Orion will come within 60 miles of the lunar surface, using the moon’s gravity to enter an elongated orbit.

As of Saturday morning, the launch appeared to be a go. “At this time we are not as a launch team working any significant issues so I’m happy to report that and everything is proceeding on schedule,” Charlie Blackwell-Thompson, NASA’s launch director, told a news conference.

The objective is to demonstrate the Orion capsule can be safely launched and recovered before an attempt is made with a human crew. The spacecraft’s path will take it farther from Earth than any vehicle built to carry humans has gone before. After spending about two weeks in lunar orbit, Orion will make the journey back to Earth and splash down in the Pacific Ocean off the coast of San Diego under parachutes on Oct. 10.

NASA officials put the risk of losing the vehicle at one in 125.

Though no humans will be aboard, a mannequin — nicknamed Commander Moonikin Campos to honor a legendary NASA engineer who helped bring Apollo 13 safely back to Earth — will be on board, sitting inside the commander’s seat. Various sensors on its seat and spacesuit will gather data about vibrations, acceleration, and radiation throughout the mission. Two additional mannequin torsos will be on board, outfitted with thousands of sensors to record even more details.

The main objective of the uncrewed mission is to test the rocket’s heat shield, which will protect astronauts upon re-entry, NASA Administrator Bill Nelson told Bloomberg on Saturday.  “And how critical is it? You don’t put humans on the top until you think it’s safe. So it’s a critical test,” he said.

Additionally, a package called Callisto, named for the companion of Artemis in Greek mythology, will be flying inside Orion. Callisto houses both an Amazon Alexa and a touch screen that will host Cisco’s Webex software. The payload is meant to test out smart tools that future astronauts might use on Orion in order to communicate over video with Mission Control and get information about where they are in space.

Also packed on the SLS are nearly a dozen small satellites that the rocket will deploy after it’s sent Orion on its way to the Moon.

There are plenty of moving parts on this mission, and numerous test objectives that NASA hopes to accomplish. But Artemis I could prove to be a make or a break moment for NASA.

“NASA needs to show that it works,” said Casey Dreier, senior policy adviser for the Planetary Society. “That’s the fundamental risk of this program.”