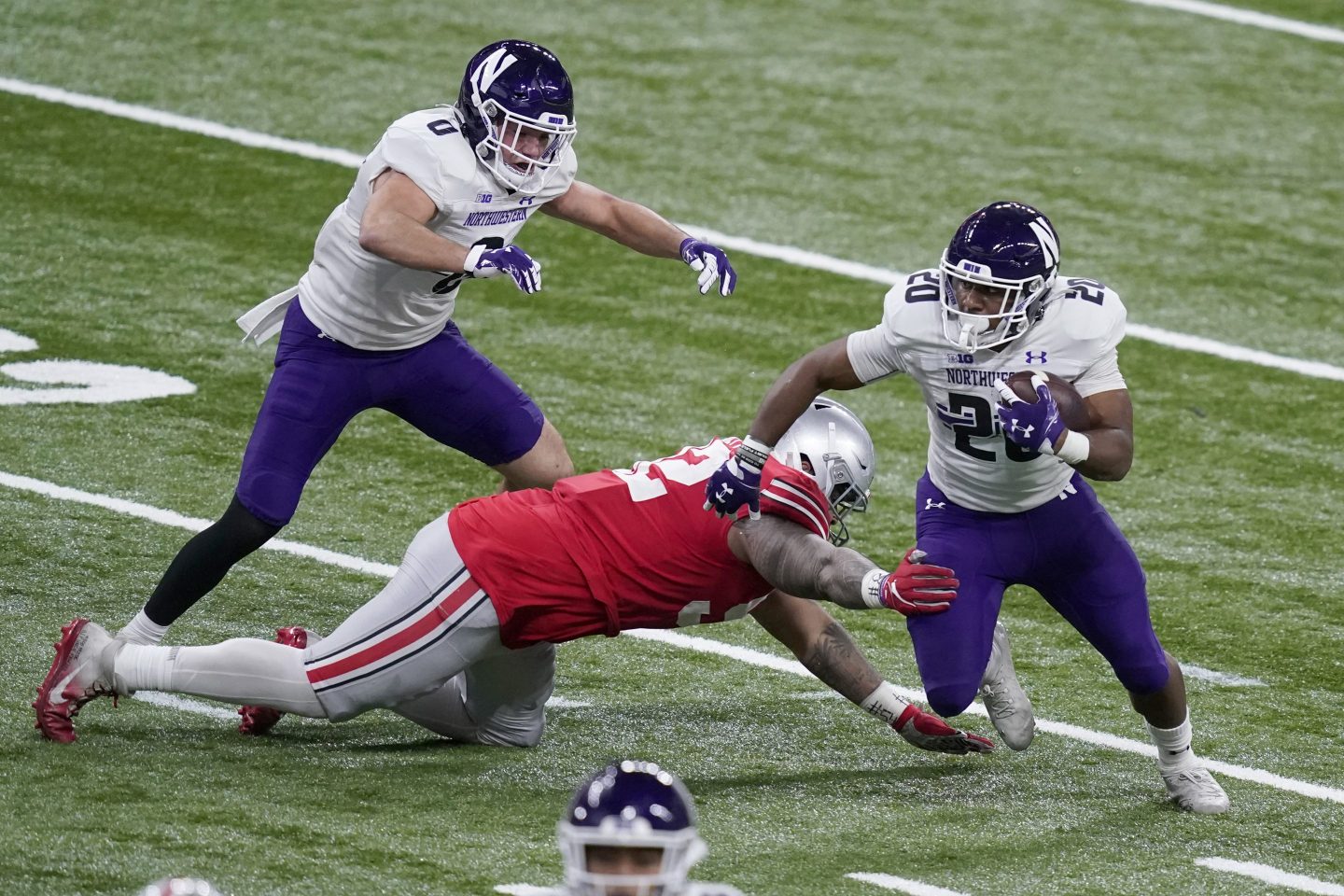 The Big Ten announced Thursday that it has reached seven-year agreements with Fox, CBS and NBC to share the rights to the conference's football and basketball games.
Darron Cummings—AP Photo

The Big Ten announced Thursday it has reached seven-year agreements with Fox, CBS and NBC to share the rights to the conference’s football and basketball games.

The deals go into effect in 2023, expire in 2030 and eventually will allow the conference’s soon-to-be 16 member universities to share more than $1 billion per year, a person familiar with the terms told The Associated Press.

The person spoke to the AP on condition of anonymity because Big Ten and network officials were not disclosing financial details publicly, but the deal is believed to be the richest ever on an annual basis for a college sports property. The large increase in revenue to the conference won’t kick in until the third year of the deal and gradually will increase over the final five years.

“I think what it does, it affords us the opportunity to make sure that we can continually do the things we need to do to take care of our student-athletes, to fortify our institutions, to build our programs,” Big Ten Commissioner Kevin Warren told the AP.

The Big Ten currently has 14 members, stretching from Rutgers and Maryland on the East Coast to Nebraska across the Midwest, and covering some of the biggest media markets in the country, including New York, Philadelphia and Chicago.

In 2024, Southern California and UCLA are scheduled to join the Big Ten, adding the Los Angeles market to its footprint.

With ESPN out of the equation for Big Ten football after a 40-year relationship, the league is set to lock down three prominent time slots with its network partners.

Fox, which has shared the rights to the Big Ten with ESPN since 2017 and owns a majority stake in the Big Ten Network, will continue to feature noon Eastern time as its primary game of the day.

CBS, starting in 2024, will replace the Southeastern Conference game of the week at 3:30 p.m. Eastern—that is moving to ABC—with a Big Ten game.

CBS will carry 14-15 Big Ten football games a season from 2024-29, including a Black Friday game. Unlike with its longtime SEC deal, CBS will not be guaranteed the first selection of football games each week with the Big Ten. Fox, CBS and NBC will hold a draft for games, allowing each network some opportunities for first selection in a given week.

In 2023, CBS will carry seven Big Ten games while it still has the SEC on CBS at 3:30 p.m. Eastern. The network will continue to be the home of Big Ten men’s basketball, including the conference tournament semifinals and finals, and it will begin airing the women’s basketball tournament championship.

“When we did our financial analysis, and looked at the major markets—even before USC and UCLA—and the national footprint of the Big Ten, it was a very attractive deal for us,” said Sean McManus, chairman of CBS Sports. “And I think the money is fair. It’s unprecedented. They’re the largest deals in the history of college football.”

Starting in 2023, NBC will launch “Big Ten Saturday Night” in prime time and broadcast 15-16 games per season. The agreement with NBC also includes eight football games and dozens of men’s and women’s basketball games per season to be exclusively streamed on Peacock, the network’s online subscription service. NBC also has a separate, longstanding broadcast deal with Notre Dame, which remains unaffiliated with a conference.

Each network will air the Big Ten’s championship football game at least once during the length of the deals, with Fox securing the rights to four (2023, ’25, ’27 and ’29).

Warren spent more than two decades working as an executive in the front office of three NFL teams. He said the Big Ten’s vision for its new broadcast deal was modeled after an NFL Sunday, with three consecutive marquee games across three different networks, airing from noon to nearly midnight Eastern.

“I just thought where we were in the Big Ten, we had a very unique opportunity because we have the institutions that could do it,” Warren said. “We have the fan avidity. We have the breadth, we have the historical foundation, that we were in a position to really do something unique with three powerful brands in Fox, CBS and NBC.”

The Big Ten’s alignment with three traditional networks shows that while streaming might be the future, linear television is not dead.

“It may be dying in certain aspects. You could say things like scripted dramas. Sitcoms. But for sports and news, it’s never been stronger,” retired former president Fox Sports Network Bob Thompson said.

“The conferences or leagues are a little reticent to make that big of a jump from the wide, wide distribution of broadcast television,” he added. “Now you’re going to jump to the streaming service, which in the big scheme of things, the numbers are still relatively small in terms of how many people watch and use them.”