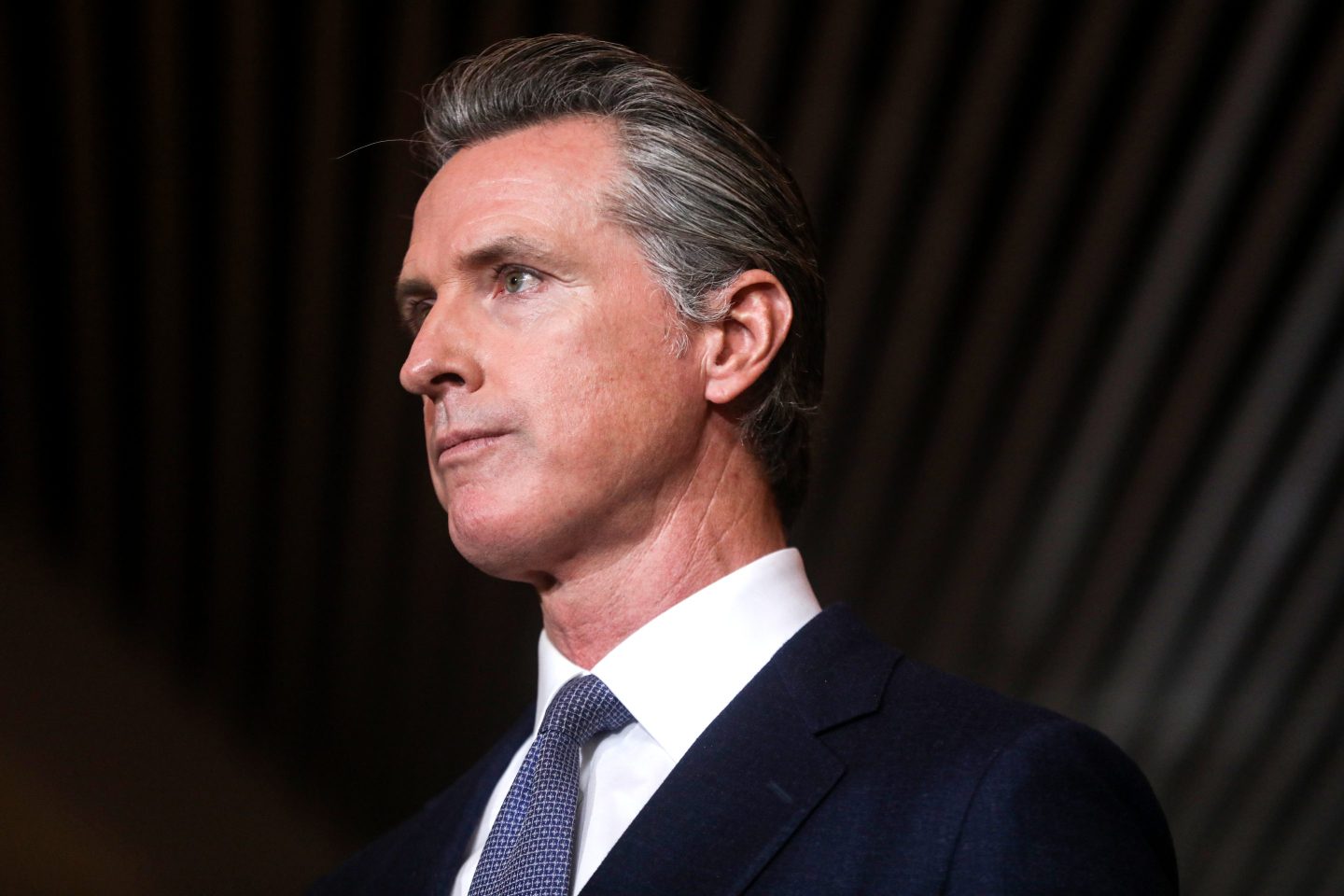 SACRAMENTO — Gavin Newsom is fed up with Republicans for attacking abortion rights and blocking gun regulations—and with his own Democratic Party for failing to boldly and brashly take on the conservative right and push a progressive agenda.

And as California’s first-term governor positions himself as the national Democratic Party pit bull, no other issue is defining his political rise like health care.

“Where the hell is my party?” Newsom fumed in May as it became clear that the U.S. Supreme Court was poised to overturn Roe v. Wade. “Why aren’t we standing up more firmly?” He later took out a television ad accusing Florida’s Republican leaders of “criminalizing women and doctors.”

Over the past year, Newsom has lobbed multiple attacks against Florida Gov. Ron DeSantis, a possible presidential candidate, and Texas Gov. Greg Abbott—both Republicans—for their positions on guns and abortion. He has taken to national TV and social media to dub California an abortion sanctuary state that welcomes women from around the country—and is boasting about a November ballot initiative that would enshrine the right to abortion in the state constitution. And he’s framing gun violence as a public health crisis, saying that Democrats need to more aggressively challenge Republicans to enact sweeping gun safety laws.

“It’s time to put them on the defense—we’re sick and tired of being on the defense,” Newsom said in late July as he signed a law that allows Californians to sue gun-makers for negligence, a law modeled after a Texas law allowing private citizens to sue abortion providers or those who help women seeking an abortion.

Newsom, a former mayor of San Francisco, is also hitting the airwaves to tout his health care accomplishments. He is crowing about expanding health care coverage to millions of previously uninsured Californians—a holy grail issue for Democrats agitating for universal health care—and California’s attempt to force down drug prices by entering the generic drug market. He also argues that, on his watch, California has led the nation in its response to the COVID-19 pandemic, pointing to his decision to impose the first statewide stay-at-home order in the country, in March 2020.

Political strategists and national health care experts say health care is a winning issue for the Democratic Party as it readies for a midterm election battle in November—and as Democrats seek a strategy to retain the White House in 2024. And they say Newsom could be a strong contender.

“You can’t look at Gavin Newsom and say he wouldn’t be a very attractive option,” said Chris Jennings, a health policy veteran based in Washington, D.C., who worked under Presidents Barack Obama and Bill Clinton. “He seems to relish debates at a time when people are looking for a fighter, and he’s well positioned, having notched some progressive health care wins. But it hasn’t been at the expense of scaring away moderates.”

Newsom, who last year handily defeated a Republican-driven recall attempt and is expected to coast to reelection in deep-blue California in November, denies that he’s laying the groundwork for a presidential bid and says he supports President Joe Biden unequivocally.

But as he takes to the airwaves and social media to boast about his health care bona fides, he appears to be exploring a national campaign and is putting a spin on his California record. For instance, although he says California offers “universal access to health care coverage,” many Californians remain uninsured, can’t afford coverage, or can’t get treatment even if they have health insurance.

“His achievements are often embellished, and pronouncements of success are often made before the hard work is done,” said Rob Stutzman, a Republican strategist in California. “And there’s plenty of things for people like Ron DeSantis to point to about California that are utter failures, like the homelessness crisis.”

Polling shows slipping support for Biden and Vice President Kamala Harris, also a Californian, and a recent national CNN poll found that 75% of Democratic and Democratic-leaning voters want someone other than Biden to run in 2024. One late-June survey of U.S. adults suggested that Newsom could prevail in a general election matchup against DeSantis or former President Donald Trump.

“I think we as Democrats are standing up to the right wing, but Gavin Newsom has a certain edge to his critique, and I like it. I think it’s feisty, I think it’s strong, I think it’s fearless,” said former U.S. senator Barbara Boxer, a California Democrat who retired from office in 2017 but is working to elect Democrats to national office.

“Health care is important to him, and he figures out a way to get things done,” she said. “When the time is right, I would be proud to support him.”

Newsom campaign spokesperson Nathan Click said Newsom believes Biden should run and will not challenge him but argues he can elevate key Democratic issues such as abortion rights.

“He’s leading by example and taking the fight to Republicans, making them own how they are taking away people’s rights and freedoms,” Click told KHN. “He realizes that he has agency on this question and how the Democratic Party is going to rebuild.”

A spokesperson for Abbott slammed Newsom for ignoring problems on his home turf, such as the homelessness epidemic and the high cost of living. The DeSantis campaign did not respond to requests for comment but has lobbed similar attacks against Newsom.

“Governor Newsom should focus on all the jobs and businesses that are leaving California and coming to Texas,” said Abbott press secretary Renae Eze.

Newsom campaigned on single-payer health care during his first run for governor, promising to “lead the effort” to create a taxpayer-financed system that puts the government in charge of delivering care.

But in office, he has distanced himself from that pledge, instead pressing a message of universal health care that keeps the current system intact but expands coverage.

“California is the FIRST and ONLY state in the nation offering universal access to health care coverage,” Newsom said in back-to-back campaign emails in late July. “We have the strongest gun safety laws in the country. We are making our own insulin in California.”

But California is not making its own insulin yet. And though Newsom has said California offers universal access to health care, coverage remains too expensive for many low- and middle-income residents, and Medi-Cal—California’s Medicaid program—is riddled with problems that put care out of reach for many.

“We as Democrats have to be honest enough to acknowledge that coverage does not automatically mean adequate or timely care,” said Democratic strategist Garry South, a longtime Newsom ally. “The fact is that under Medi-Cal they’re often not getting good care that is timely and appropriate to meet their health care needs.”

Since he became governor in 2019, Newsom has expanded Medi-Cal to hundreds of thousands of people living in the state without legal authorization. This year, he approved an additional expansion to open the program, by 2024, to all Californians who are income-eligible, regardless of immigration status.

Newsom is also allocating billions to bring social services and behavioral health care to the most vulnerable and expensive Medi-Cal patients, including homeless people and people with drug addictions. And after a Republican-controlled Congress zeroed out the Affordable Care Act penalty on uninsured people in 2017, Newsom approved an insurance requirement for Californians and state-based subsidies to help low- and middle-class residents purchase coverage.

Despite these major expansions, an estimated 2.3 million Californians under 65 will remain uninsured, according to an April analysis by University of California researchers.

Richard Figueroa, a longtime health policy expert who now serves as deputy cabinet secretary for Newsom, argues the administration has made nation-leading strides to expand health insurance but acknowledged that California will never be able to expand coverage to everyone.

“We will always have some uninsured, given the kind of patchwork system that we have. There’s no requirement that people be enrolled, even if it’s affordable and even if it’s free,” Figueroa told KHN. “We’re filling a big gap in the access piece of the puzzle.”

Newsom’s expansion of health care coverage to all immigrants regardless of status may also open him up to criticism should he mount a bid for national office.

“Whether saying ‘I was able to achieve these things in liberal California’ translates to the rest of the country will be the question,” Jennings said. “When it comes to subsidizing immigrants, most national politicians have concluded that you can’t take that position and win nationally.”

Celinda Lake, a political strategist who helped lead polling for Biden’s 2020 campaign and conducts polling for the Democratic National Committee, said Newsom could deflect political attacks if he can make the case that he’s providing better care while saving taxpayer money.

“Democrats are fired up, and voters don’t understand why more can’t get done in Washington,” Lake said. “Whoever is in the Democratic primary, you’re going to have to be for universal health care. And if Gov. Newsom runs in 2024 or 2028, he can point to what he’s done in California to show it can work.”

This story was produced by KHN (Kaiser Health News), a national newsroom that provides in-depth coverage of health issues and that is one of the three major operating programs at KFF (Kaiser Family Foundation). KHN is the publisher of California Healthline, an editorially independent service of the California Health Care Foundation.