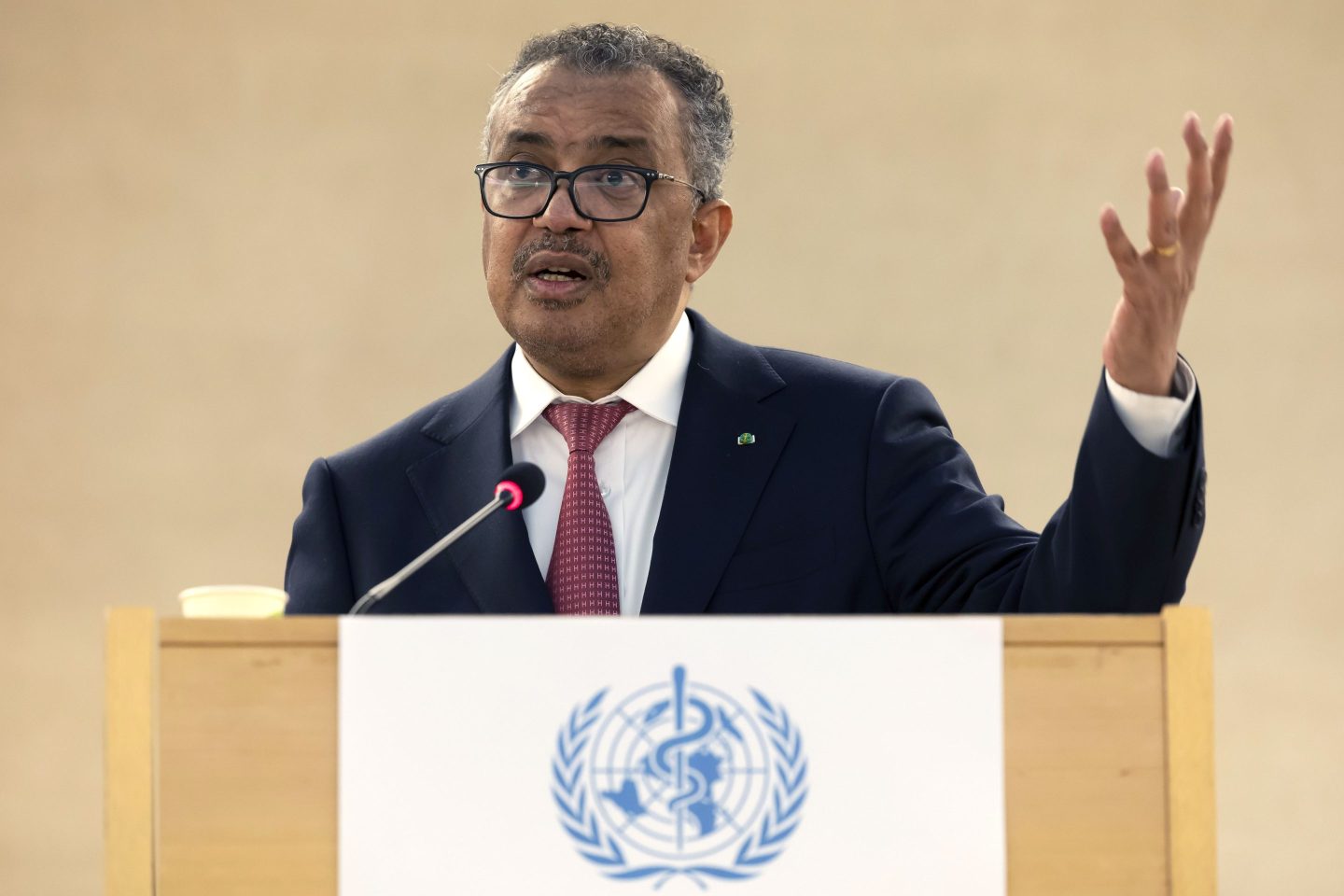 Tedros Adhanom Ghebreyesus, Director General of the World Health Organization (WHO) delivers his speech after his reelection, during the 75th World Health Assembly at the European headquarters of the United Nations in Geneva, Switzerland, on May 24, 2022.
Salvatore Di Nolfi—Keystone/AP

The head of the World Health Organization on Wednesday advised men at risk of catching monkeypox to consider reducing their sexual partners “for the moment” following the U.N. health agency declaring the escalating outbreaks in multiple countries to be a global emergency.

WHO Director-General Tedros Adhanom Ghebreyesus said 98% of the monkeypox cases detected since the outbreaks emerged in May have been among gay, bisexual and other men who have sex with men. He called for those at risk to take steps to protect themselves.

“That means making safe choices for yourself and others, for men who have sex with men,” Tedros said. “This includes, for the moment, reducing your number of sexual partners.”

Infectious individuals should isolate and avoid gatherings involving close, physical contact, while people should get contact details for any new sexual partners in case they need to follow up later, the WHO chief said.

The U.S. Centers for Disease Control and Prevention has not suggested that men who have sex with men reduce their sexual partners, only that they avoid skin-to-skin contact with people who have a rash that could be monkeypox.

WHO officials emphasized that monkeypox can infect anyone in close contact with a patient or their contaminated clothing or bedsheets. The U.N. health agency has warned that the disease could be more severe in vulnerable populations like children or pregnant women.

“We know very clearly that one of the main modes of exposure for this particular illness is through direct contact, close contact, skin to skin contact, possibly even face to face contact, exposure to droplets or virus that may be in the mouth,” Dr. Rosamund Lewis, WHO’s technical lead for monkeypox, said.

Dr. Hugh Adler, who treats monkeypox patients in the U.K., said monkeypox was being transmitted during sex and that sexual networks and anonymous sex with untraceable partners were facilitating its spread.

“It’s just as likely that monkeypox was always capable of transmitting and presenting like this, but it hadn’t been formally reported or so widespread before,” he said.

The European Union’s health commissioner urged the bloc’s 27 member nations Wednesday to step up their efforts to tackle outbreaks in the EU, which she called “the epicenter of detected cases.”

In a letter to European health ministers obtained by The Associated Press, EU Health Commissioner Stella Kyriakides called for a “reinforced, concerted and coordinated action.”

“There is no time for complacency and we need to continue working together to control the outbreak,” she wrote.