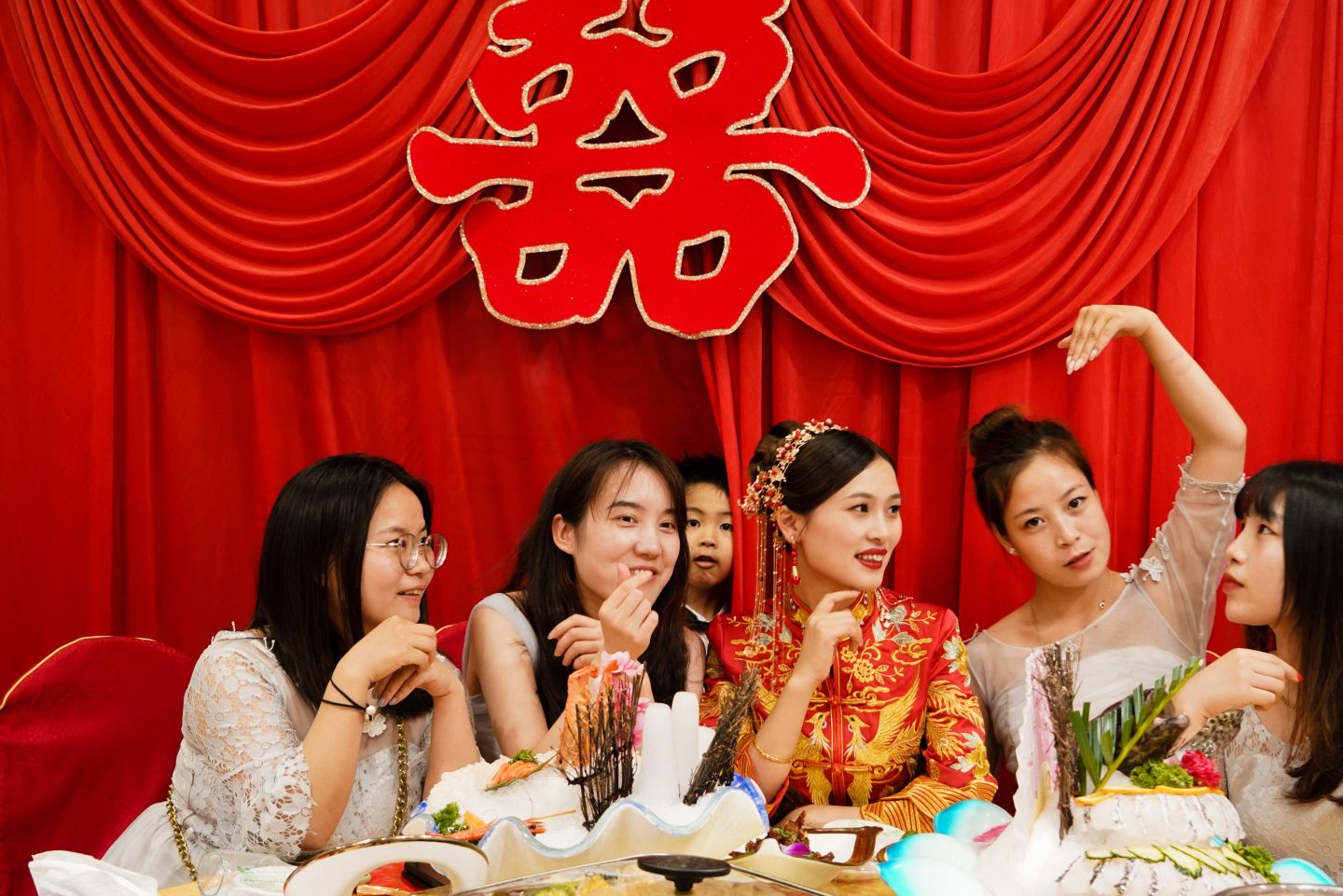 Demand for professional bridesmaids is booming in China.
Costfoto—Future Publishing via Getty Images

Traditionally being asked by a friend or relative to be a bridesmaid has been considered an honor and something to look forward to for centuries—but in China, the job of being at a bride’s side is becoming a booming growth industry.

Professional bridesmaids are increasingly becoming the norm for Chinese women as they plan their wedding days, according to reports.

One bridesmaid and groomsman rental company based in the Chinese city of Hangzhou told state broadcaster CCTV that its number of registered members has grown to 50,000 since its February launch, and that it received 10 to 20 orders per day over the last month.

Bridesmaids can be hired through wedding planners or companies that specialize in the niche industry, but services are also advertised on social media platforms like Weibo.

On TikTok—known as Douyin in China—a hashtag that translates to “rent bridesmaids” presents users with multiple videos on the topic, and this video from a Guangdong-based bridesmaid rental studio offers professional bridesmaids who can “save worry and effort” but “will not steal the limelight.”

Brides are reportedly able to make demands about prospective bridesmaids’ looks, weight, and personality, and even their academic accomplishments.

Xie Yuke—a 22-year-old woman who has traveled more than 140,000 kilometers (around 87,000 miles) to earn a living as a professional bridesmaid all over China—told Chinese state-run news outlet Sixth Tone on Monday that the pandemic had helped the rent-a-bridesmaid industry.

China’s zero-COVID policy has led to harsh lockdowns in major cities like Shanghai this year, confining millions of people to their homes and making it impossible for many women’s first-choice bridesmaids to travel, Xie said.

However, in some cases where COVID lockdowns were not an obstacle, brides-to-be still chose to hire bridesmaids because they felt that their friends couldn’t live up to their wedding-day expectations. According to Xie, bridesmaids need to be unmarried and cannot be taller than the bride. She said an ideal height for an aspiring professional bridesmaid was between 5 feet 11 and 5 feet 8.

A typical day on the job would see Xie wake up at 4:30 a.m. to get ready for the wedding, and she would be expected to spend the day taking photos, entertaining guests and making toasts until the wedding banquet ends at around 8 p.m.

When she works at a wedding, Xie said, she usually pretends to be a friend or classmate of the bride.

While Xie attributed the boom in demand for professional bridesmaids to the pandemic, there is also a darker side to why some women opt to rent strangers to join their wedding party.

According to Yang Hu, a senior researcher at the University of Essex’s department of sociology, some women take the hiring route because of “the dangers of being a bridesmaid in China.”

“[Bridesmaids] are expected to fend off drinking requests and in a lot of cases drink Chinese rice wine on behalf of the bride,” he explained in a 2016 blog post.

“It is a widespread tradition that the newlyweds should toast bottoms up to every wedding guest on an individual basis—meaning that the bridesmaid often ends up drinking on behalf of the bride and overconsuming alcohol. In fulfilling their obligation, some of them suffer from alcohol poisoning or even risk death.”

He added that bridesmaids also act as the final “hurdle” before the groom can enter the bridal suite after the wedding, which often leads to the groom and groomsmen carrying out “stunts laced with sexual innuendo.”

“In many cases, bridesmaids are unwillingly involved in sexual stunts designed for the newlyweds,” Yang said. “In extreme cases, some are stripped of their clothes and molested, or attacked.”

He noted that most reports of alcohol poisoning, sexual harassment, and abuse of bridesmaids are concentrated in China’s rural areas and provinces.

In late 2016, a woman in Hainan province reportedly died after drinking too much alcohol while performing her “duties” as a bridesmaid.

Two years later, a 17-year-old bridesmaid died of suspected alcohol poisoning after reportedly being “forced to drink” at a wedding banquet.

Prior to the first death, Chinese news outlet China.org.cn had already reported that the industry was taking off because expectations of women in bridal parties to carry out increasingly demeaning tasks had “scared away the real bridesmaids who usually used to be friends and relatives of the bride.”

“Bridesmaids’ jobs went from accompanying the bride to gradually being asked to light cigarettes, feed fruits to guests, have physical contact with guests, and even take off their clothes in front of everyone in some rare cases,” the outlet claimed.