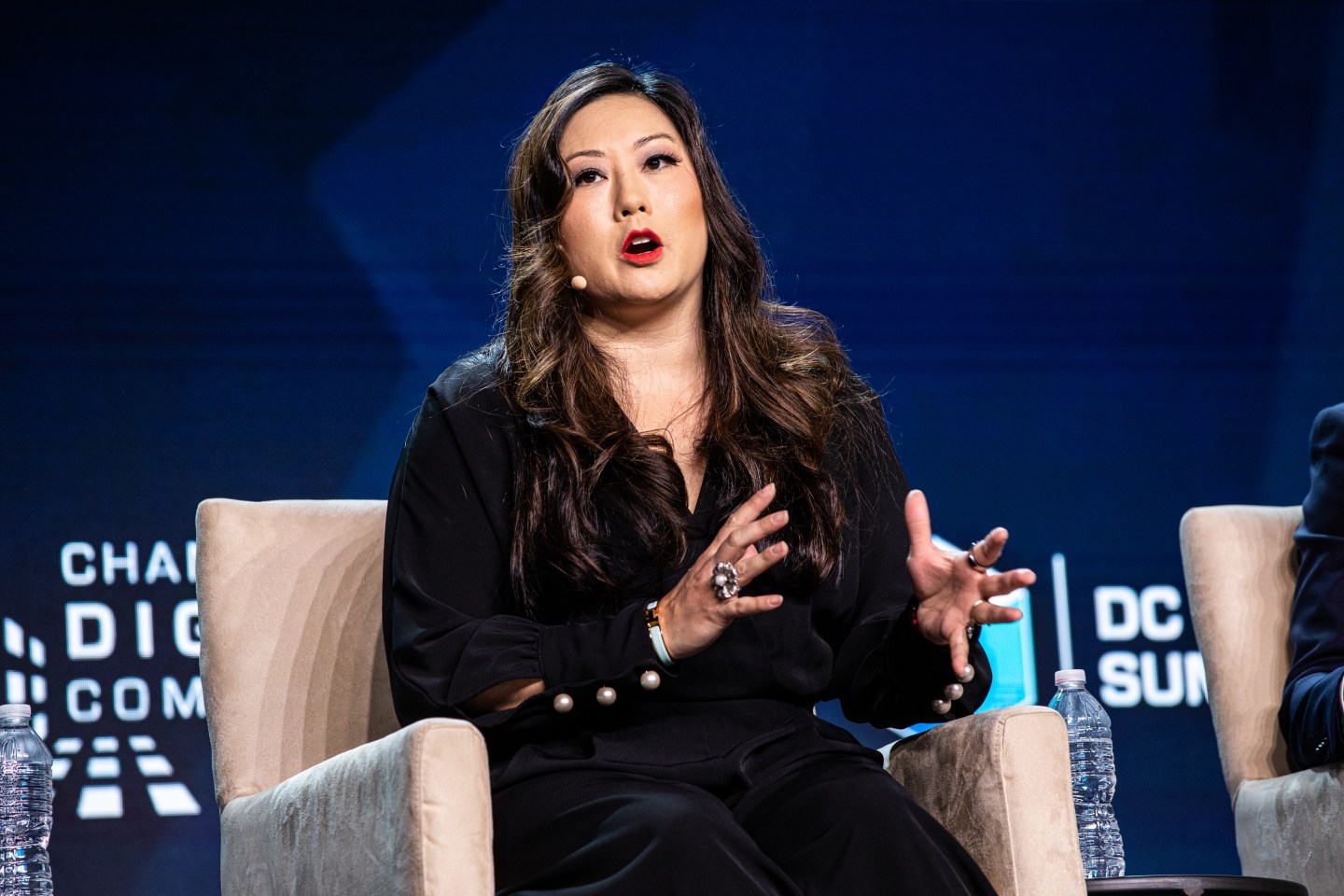 Caroline Pham of the Commodity Futures Trading Commission appeared to criticise her colleagues at the Securities and Exchange Commission over a case of crypto insider trading as the two battle for regulatory oversight.
Valerie Pleasch—Bloomberg/Getty Images

Coinbase insider trading case in the middle of a regulatory tug-of-war for control over the prestigious task of regulating crypto assets.

The Securities and Exchange Commission charged on Thursday a former Coinbase product manager and two associates with securities fraud.

The trio had allegedly made off with over $1 million in illicit profits based on sensitive and confidential corporate information. Two of them have been arrested—one while he was attempting to leave the country—and are now held in U.S. law enforcement custody.

Coinbase says the men could not have possibly committed securities fraud, because Coinbase doesn’t even offer clients the ability to trade securities. More to the point, the Justice Department and the Commodity Futures Trading Commission appear to think so as well, the crypto exchange claims.

“The DOJ reviewed the same facts and chose not to file securities fraud charges against those involved. As CFTC Commissioner Caroline Pham stated, this is a ‘striking example of regulation by enforcement’ by the SEC,” wrote the company’s chief legal officer, Paul Grewal in a post published on Friday entitled “Coinbase does not list securities. End of Story”.

The case, SEC vs Wahi, is shaping up into a regulatory tug-of-war pitting the CFTC against the SEC, and reopens the debate over which regulatory bucket a digital coin or token falls into and which U.S. agency will win the high-profile task of providing oversight.

“Instead of crafting tailored rules in an inclusive and transparent way, the SEC is relying on these types of one-off enforcement actions to try to bring all digital assets into its jurisdiction, even those assets that are not securities,” argued Grewal.

Meanwhile, Commissioner Pham of the CFTC seemed to criticize the SEC in a statement posted on social media.

“The SEC’s allegations could have broad implications beyond this single case, underscoring how critical and urgent it is that regulators work together,” she wrote.

Not concerned with labels

Currently, Coinbase believes the SEC, an agency with a long reach, is staking its claim to that prize. Without a clear set of guidelines that provide a level playing field and legal certainty, this piecemeal approach of one-off enforcement actions by the SEC could potentially stifle the innovation in the crypto industry, it fears.

Coinbase’s chief policy officer, Faryar Shirzad, wrote in a separate post that the SEC’s intervention has created “enormous risk” for investors, citing the case of Ripple’s native token XRP suddenly being deemed by the SEC a security.

“We saw this in vivid detail when the Commission brought an enforcement action against Ripple, after years of taking no action against them,” Shirzad wrote. “The XRP case is especially notable because there was disagreement even within the federal government about whether XRP was a security or not: FinCEN [Financial Crimes Enforcement Network] had determined it was not a security, and then the SEC said that it was.”

The regulatory treatment of crypto is a controversial one. Michael Saylor, CEO of MicroStrategy the largest publicly-known holder of Bitcoin, recently argued that only Bitcoin fits the description of a commodity as it lacks an issuer, product development, employees, or a management team.

All other cryptocurrencies are by comparison little more than “unregulated securities” in his book. That’s because they fit the broad description: There is typically a team behind them attempting to add functionality to their coins and tokens, as well as encouraging a decentralized system of third-party applications to build on top of their blockchains’ base layer of code.

Grewal counters by saying Coinbase does an extensive review of each asset it lists. In the process the company weeds out whatever could potentially be deemed a security that would fall under the SEC’s purview. As a result, his company has been actively cooperating with the DOJ, which is pursuing the case not as securities fraud but as wire fraud.

“The SEC’s charges put a spotlight on an important problem: the U.S. doesn’t have a clear or workable regulatory framework for digital asset securities,” Grewal wrote.

It also raises the issue over whether U.S. financial markets may eventually find themselves at a disadvantage to other jurisdictions, notably the European Union, that have already implemented a legal framework to give issuers certainty.

The SEC’s director for the Division of Enforcement, Gurbir Grewal (not related to Paul Grewal) was unmoved by the debate.

“We’re not concerned with labels, but rather the economic realities of an offering,” he said in a statement. “Rest assured, we’ll continue to ensure a level playing field for investors, regardless of the label placed on the securities involved.”