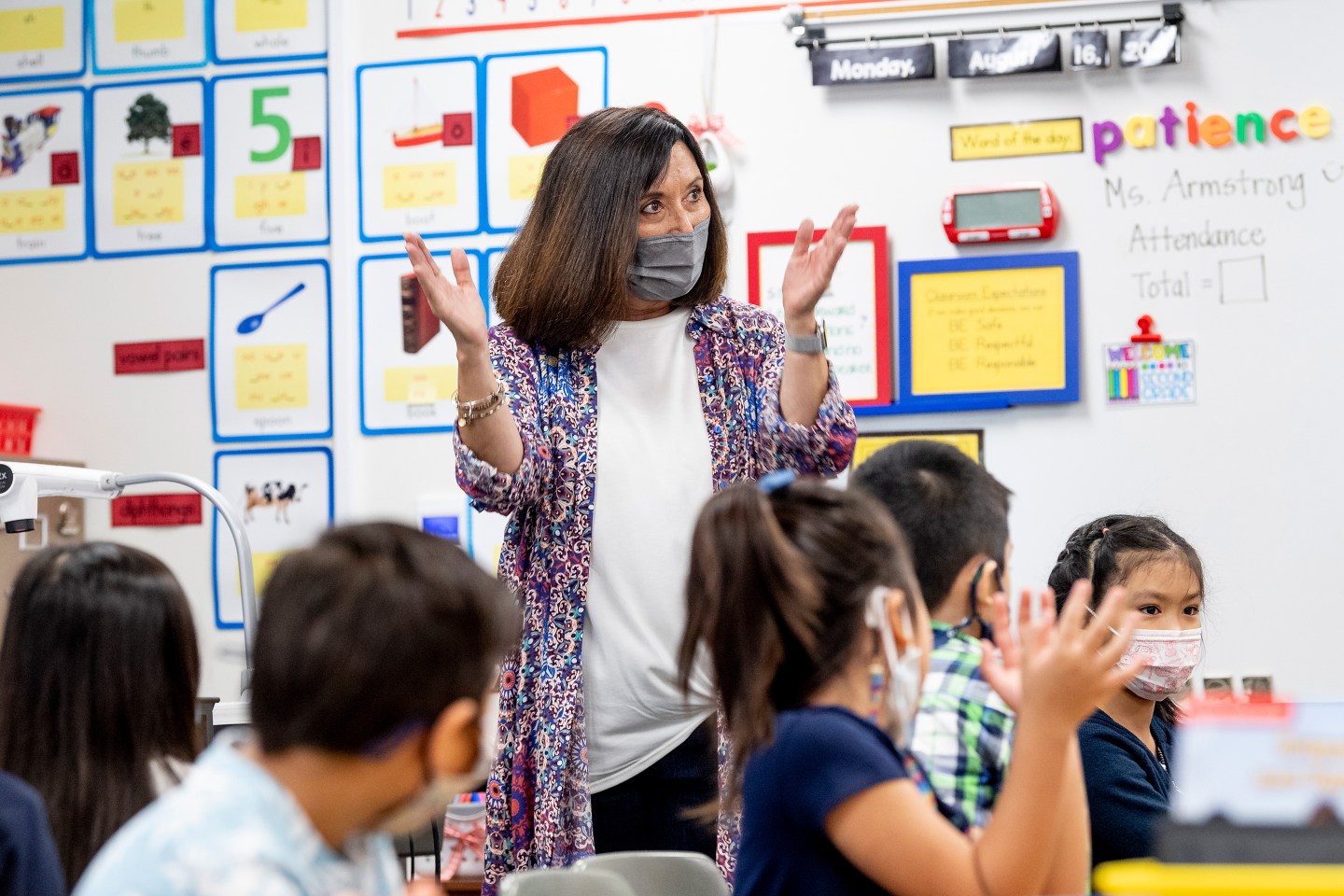 Back in 2020, at the onset of COVID-19, April became ineligible for paid sick leave—joining a group of over 33 million Americans.

In a move to stay financially stable during the pandemic, the 49-year-old, who asked that only her first name be used, says her employer, who she declined to name, eliminated benefits for anyone working fewer than 25 hours a week. But April—a medical laboratory scientist in Fairbanks, Alaska—doesn’t work part-time by choice.

“I’m ADA disabled,” she told Fortune. “It doesn’t seem fair to penalize a disabled person who isn’t making the choice to not work full time.”

Last week, April and her entire family contracted COVID-19 for the first time, landing her husband in the ICU. Without paid leave, she has lost out on six days’ worth of wages and counting, relying on a GoFundMe fundraising drive started by a friend to get through her hardship.

“I have a specialized education in a professional essential worker setting,” April said. “You would think it would be relatively stable and secure and have lots of good benefits, yet there are circumstances where that’s not true. If that can happen to this kind of situation, what about all those people out there who weren’t that lucky to have this good of a job?”

Among wealthy countries, the U.S. is an outlier as the only one that doesn’t have federally mandated sick leave—even as the global pandemic drew a spotlight to the issue. Passed in March 2020, the Families First Coronavirus Response Act required some employers to grant two weeks of paid leave to their workers. But that protection expired at the end of 2020, and tax credits incentivizing companies to carry on the policy also ended last September.

Yet the pandemic has persisted in seemingly never-ending waves. Driving the U.S.’s latest spike are Omicron subvariants BA.4 and BA.5, responsible for 81% of new COVID-19 cases, according to CDC estimates. Recent guidance from Australia suggests that reinfections with these subvariants could occur as soon as 28 days after recovering from a previous COVID-19 case, compared to the few months of immunity seen with other strains.

Is a country where millions lack the ability to stay home and keep their paycheck if infected ready to handle that?

What is the current state of paid sick leave when it comes to COVID-19?

Without national standards on paid sick leave, the U.S. lets each locality—and where no local laws exist, each employer—decide its own policies regarding paid time off to recover from COVID-19, care for a relative in isolation, or get the vaccine. Left to the states, more than half didn’t implement any paid sick leave or hazard pay for direct care and other essential workers during the first year and a half of the pandemic, according to a recent study by research and advocacy nonprofit PHI National.

A key message that public health experts repeated at the start of the pandemic is being  stressed again for the latest variants: “Stay home if sick.” Some epidemiologists, like Sarah Andrea, say that’s easier said than done.

“We still have this widespread problem, and individual solutions aren’t going to cut it,” said Andrea, an assistant professor at Oregon’s OHSU-PSU School of Public Health. “You can’t say to a person ‘don’t come to work if you’re sick,’ and not offer them the ability to.”

Roughly one in four American workers do not have access to paid sick leave at all, as of 2020. Access also varied widely by profession and income. While 94% of workers earning in the top 25% reported having some form of paid sick leave, the odds drop to that of a coin flip for those earning in the bottom quarter of wages, per the Bureau of Labor Statistics.

“Folks in grocery stores, folks who work in restaurants, and so on, where they’re interacting with a great number of people, are often the ones that don’t have access to these paid leave policies,” Andrea said. “They’re making a decision based on what limited options are available to them, and one of them is, ‘I can’t pay my rent and put food on the table, or I risk exposing my coworkers.’”

For those with paid sick leave, it’s not plentiful. Even private industry workers with over 20 years of experience receive seven days of paid sick leave on average, according to the Bureau of Labor Statistics. Just taking two days off to get vaccinated, another for the booster, and five more to follow CDC isolation guidelines while infected with COVID-19 already exceeds that average.

Two cases within the same year? What that could mean for sick leave

Though the Omicron subvariant BA.5 is relatively new, it quickly took over as the dominant strain in the U.S. Data on reinfections is limited, but places like New York City have seen the newest subvariants drive a spike in cases, including among some vaccinated people who recently recovered from COVID-19 in the surge earlier this year.

Shira Doron, an infectious disease physician and hospital epidemiologist at Tufts Medical Center in Boston, told Fortune that reinfections were rare before Omicron for two reasons. It wasn’t until this February that most people had COVID-19 at least once. And previously, variants were not as different from each other, so people’s immunity better carried over.

“The more immune invasive a variant is compared to the previous or recent ones that have been circulating, the more you might see this phenomenon of somebody getting reinfected in a shorter period of time than what we saw in the pre-Omicron era,” Doron said. “We did not see reinfection within the same year before Omicron came around, and now, we do.”

When asked how a second infection later this year would affect her family, April winced, “Oh god, that would really screw me up,” adding that with the rising price of gas and oil to heat her home in frosty Alaska, “It’s going to really throw us off financially because we’re kind of balancing right now.”

Australian health officials suggested reinfections could occur even sooner, less than a month after a previous infection, in their recommendation that the period of post-infection immunity should be narrowed from 12 weeks to 28 days. The CDC has not indicated it will reduce its time window.

Tom Frieden, who served as CDC Director during the Obama administration, said a newer subvariant, BA.2.75, that has barely had time to hit national headlines “appears to be even more transmissible” than BA.5. The fear is that cases will spread as paid sick leave policies from earlier in the pandemic expire.

“This is a reminder that paid sick leave should be universal,” Frieden warned. “The pressure to show up to work when sick – particularly for low-income workers who are dependent on regular paychecks – will result in the spread of COVID and other infectious diseases.”

Not everyone has the ability to work remotely from home if they get COVID-19. According to Andrea, jobs heavy on face-to-face interactions hold the greatest risk of workplace transmission if there isn’t enough paid sick leave, and teachers are a prime example. Starting in August, one of the country’s largest public school systems, Houston ISD, will no longer extend COVID-19 paid sick leave, and teachers must use whatever regular leave time they have instead. A Twitter poll of more than 200 community members hinted at the impact that could bring on.

In Maryland’s Montgomery County, an agreement that allowed public school teachers to take up to 80 hours of supplemental paid leave for COVID-related reasons, including vaccinations, was not renewed this month. The president of the local teachers union, Jennifer Martin, told Fortune she worries losing the agreement could affect the proportion of staff that stays home when infected and opts for a second COVID-19 booster—which Biden officials said they are considering this week.

“The last thing you want is for sick individuals to be coming into work and potentially making the school a place that’s a vector of disease,” Martin said. “The harder you make it for people to have the time to get a shot, the less likely you are to get the reach you want with inoculations.”