A Scandinavian country is close to eliminating homelessness with a simple solution. Communities around the world are racing to copy it 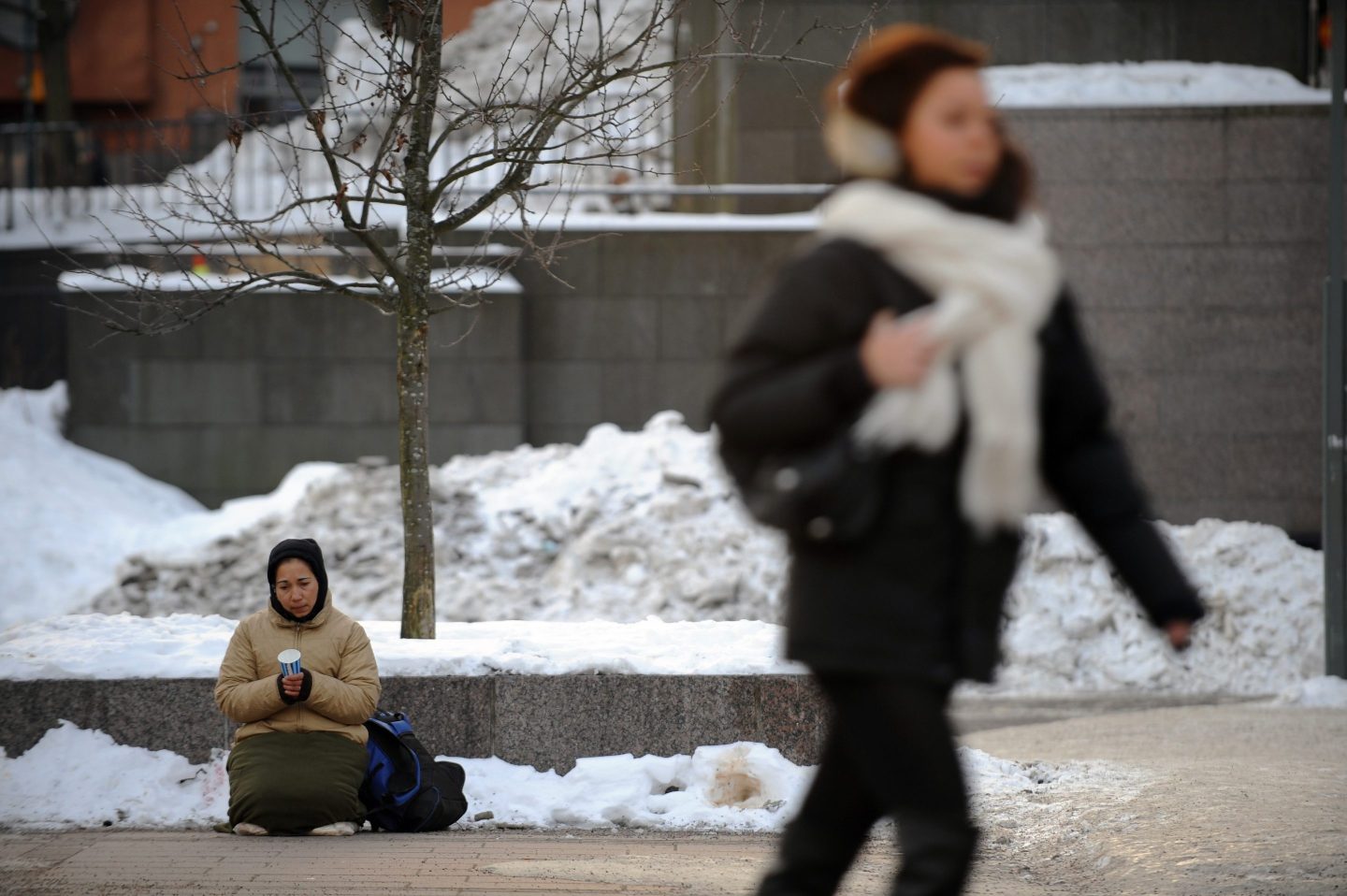 The number of homeless in Helsinki sank to around 2,200 earlier this year, putting the Finnish capital on track to eliminate homelessness by 2025.
Olivier Morin—AFP/Getty Images

The Greater Helsinki region, home to Nordic banking giant Nordea and a bevy of video game developers, repeatedly lands at or near the top of annual global rankings for the best places to live and work. The winters may run long, cold, and dark, but the economy is red-hot, a big reason why it’s become a major hub for European tech startups over the years.

More quietly, Helsinki is gaining global attention for something you cannot see.

“You don’t have street homelessness here. It’s almost zero,” says Juha Kahila, a Helsinki-based activist who’s worked for more than a decade on helping one of the country’s most marginalized communities—the homeless—find a place to live, a first step to getting back on their feet again. Citing the latest government figures, Kahila says there are roughly 2,200 homeless people in Greater Helsinki, a region with a total population of 1.5 million, roughly the size of San Antonio or Philadelphia.

That number of street-dwellers is falling fast.

Kahila is head of international affairs for the Y-Foundation, a Helsinki-based nonprofit working with the Finnish government on one of the Western World’s most ambitious social assistance schemes: to eradicate homelessness everywhere in the country.

“By 2027, there should be no homeless people in Finland at all,” Kahila says. Across the country, there are about 3,900 homeless people—a population that’s more than halved since 2009, he says.

Social activists, aid workers, and advocates for the poor across the world are closely watching Finland’s approach to stamping out homelessness. The tactic relies on a simple but effective methodology. It’s called “housing first,” a concept born in New York City in the early 1990s and raised to a new level by the Finns.

As the term suggests, the “housing first” strategy runs on the premise that chronically homeless individuals or families have a right to a roof over their head. So that basic need is addressed straight away. In Finland, that means the long-term homeless get the keys to a new place—either an apartment or a room of their own in a communal living space—and, once settled, they can start the journey of rebuilding their lives. Not only has the strategy proved effective at reducing the country’s homeless population, it’s kept tens of thousands permanently off the streets where they are less susceptible to falling ill, committing crimes, or sinking into despair.

The benefits of this approach go beyond helping those on the brink quickly exit homelessness. A study in Calgary, and another study in Denver, have shown that for every dollar spent on “housing first”-like initiatives in those regions, the savings to the communities has multiplied. For example, Denver found that the city saved $31,545 per participant as the newly housed found themselves with less need for emergency room services, detox centers, and psychiatric help. “The main point is that when [the homeless] are being housed, and they get the support they need, they don’t use the emergency services,” Kahila explains, citing Finland’s own research into the effects of housing first. “They don’t need to use the police services. They don’t end up being in jail, in prison. They don’t need as much hospital services, et cetera. So when you add all these services together, the sum is quite high.”

Housing first serves as a radical rebuke to the “staircase model,” a methodology popularized in the 1980s throughout much of the developed world. The staircase model argues that a chronically homeless person must first earn access to a shelter. Under this approach, the most common way for a homeless person to earn the keys to new lodging is by demonstrating he has overcome some obstacle, typically proving to local authorities that he’s defeated substance abuse addiction or settled debts. Critics have another name for this model: “the revolving door.” They argue that this approach does a poor job of addressing the root causes of homelessness, which is why so many treated under these kinds of programs wind up back on the streets.

In contrast, economists and aid workers are seeing real promise in the housing first model, and are increasingly crediting the Finns with showing the world the way forward.

Last December, for example, economists at the Organization for Economic Cooperation and Development, or OECD, called the Finnish model “a remarkable success,” citing the measurable cost-savings to taxpayers, and the overall success of the program in keeping the homeless off the streets—even in difficult times.

The Global Financial Crisis, Europe’s refugee crisis, the COVID pandemic, and, now, war in Ukraine—none of these calamities have derailed the country’s efforts to dramatically reduce the ranks of homeless.

Attention from around the world

In recent years, as homelessness blooms on city streets from Sydney to San Francisco, all manner of think tanks, social workers, and politicians have made the journey to Finland to observe the program firsthand and take notes. One such visitor was Andy Burnham, the mayor of Greater Manchester in the U.K., whose administration has set itself the goal of eliminating the problem of people “sleeping rough” on the streets of the region, one of Britain’s most populous.

“When I decided to make ending rough sleeping my top priority, I quickly lost count of the number of people who said, ‘You’ve got to go to Finland,’” the mayor wrote on his blog in 2019. “Last week, I finally made my first visit, and I am so glad I did. In these modern times, which seem to become more harsh and polarized with every new week, it was wonderful to find that a different world can still exist.”

In the years since, Manchester has developed a successful “housing first” policy of its own that’s helped more than 300 rough sleepers find permanent homes. Last month, the program secured an additional £6.3 million ($7.5 million) in government funding, enough to support the initiative for a further two years.

In keeping with the Finnish model, Greater Manchester is teaming with local authorities and aid groups specializing in homelessness to identify the most urgent cases, and get them the help needed—whether it be assistance with job training and financial literacy or mental health and substance abuse consultation—alongside a place to live.

Similarly, Y-Foundation works with the Finnish government and local city councils to address the problem town by town. Over the years, Y-Foundation has become the fourth largest landlord in the country, acquiring properties across Finland with a specific aim to house the homeless. At first, the Y-Foundation used public and private grant money to acquire the properties. But, in recent years, the rents it collects from its formerly homeless tenants have become a vital income stream—topping €100 million annually—to help the operation grow, showing the model can be a self-sustaining one.

In Y-Foundation’s latest financial statement, the organization noted it managed 18,000 properties housing 26,000 tenants, and that its vast collection of properties was being managed at a profit. As a nonprofit, the surplus funds are reinvested in the foundation.

According to Katie Rose, program director at the Centre for Public Impact—a London-based think tank that works with governments and policymakers—the Finns’ success with the housing first model can be traced to practitioners like Y-Foundation gaining support from the highest levels of government.

“We’d argue that a key factor that has enabled it to work is the Finnish government’s approach to governance more broadly, which they’ve recently begun describing as ‘humble government.‘ This means that when forming new policies or interventions, the central government does not assume it knows best or that a single solution will work across all contexts. Instead, it supports local learning and experimentation,” Rose told Fortune via email.

“We believe that Finland’s success on complex issues like homelessness and education,” she continued, “is a testament to what national governments can achieve when they optimize for learning rather than control.”

She cites Austin and Liverpool as cities with homelessness initiatives that have emerged in recent years as models in their own right. As the Finns have done, officials in Austin and Liverpool have created alliances of public and private interests—not just city authorities but local specialists on homelessness—that work closely with the homeless population to find permanent solutions.

These kinds of approaches run at odds with the roundly rejected tough-on-crime measures being enacted in places like Hungary and Tennessee where, in recent years, sleeping on city streets and in parks has become criminalized, leading to the incarceration of vast numbers of homeless people.

As Y-Foundation’s now-retired CEO Juha Kaakinen said at a recent TEDx talk, measures to lock up the homeless are “not very effective. They cost a lot, and are not very human.”