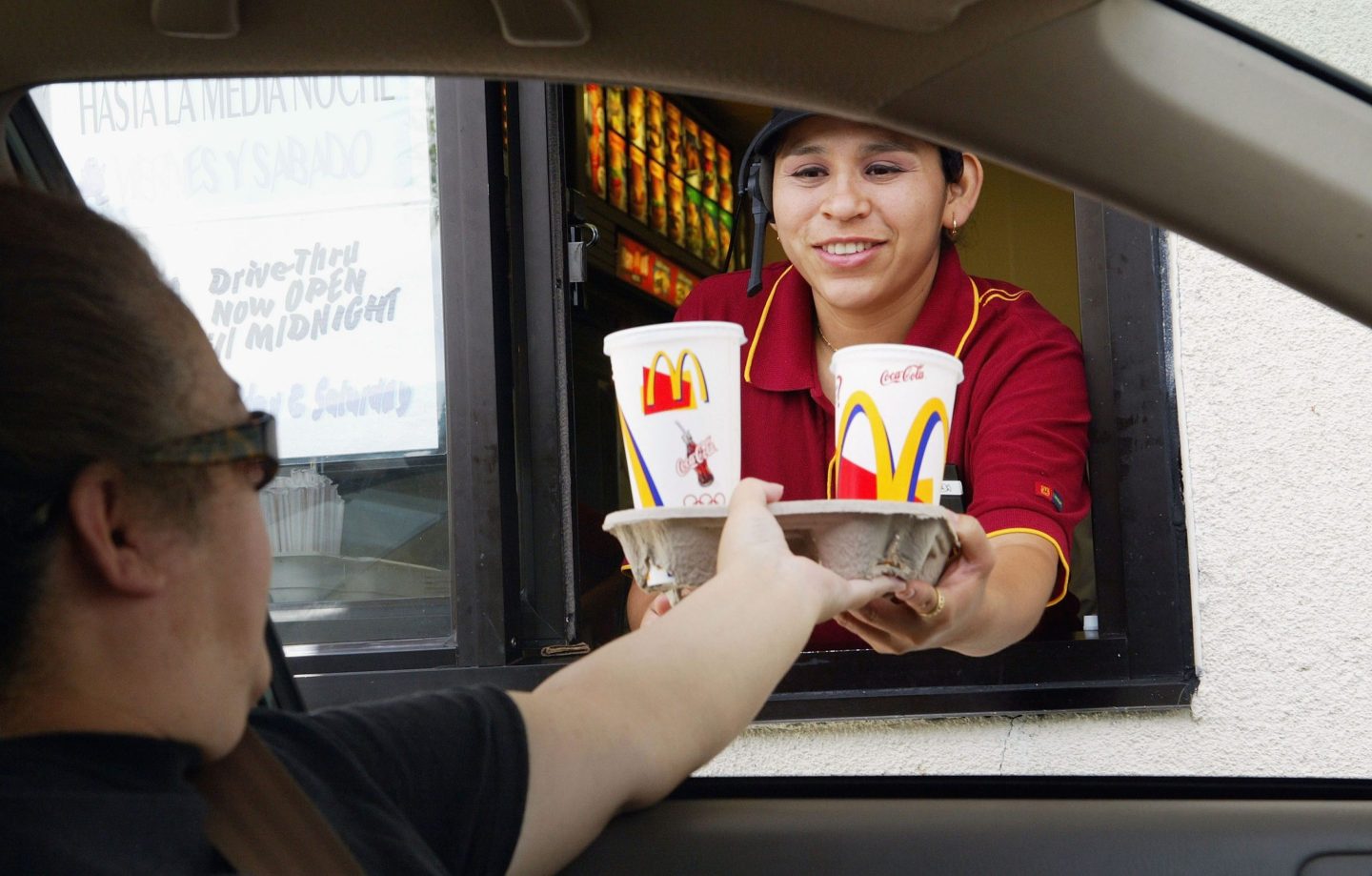 Josephine Hernandez hands a tray of drinks to a drive thru customer at a McDonald's restaurant July 29, 2003 in Redwood City, California.
Justin Sullivan/Getty Images

The all-American genre of fast food has historically been an inflation killer.

Industrialization in the restaurant industry has lowered prices for consumers year after year ever since the first White Castle opened in 1921, signaling the beginning of the industry, and definitely since McDonald’s debuted in the early 1940s.

Now though, more than a century after fast food was born, raging inflation has made what was once an affordable option for everyone, considerably less so.

And with roughly 61% of Americans living paycheck to paycheck as of April 2022, a more than nine percentage point jump compared to a year ago, that’s a problem.

While sky-high housing costs and record gas prices have captured most of the inflation headlines in recent months, the rising cost of food can have a devastating impact on consumers, particularly those with lower incomes.

In May, the Labor Department reported that grocery store prices rose 11.9% over the past year, and at restaurants and fast-food locations outside the home, prices were up 7.4% over the same period. That amounts to the largest increase in overall food prices for Americans since 1981.

Fast-food companies around the nation have been raising prices as a toxic mix of inflated wholesale input costs, an ongoing labor shortage, and rising wages continue to hit their bottom lines. Here’s how cheap fast food became a thing of the past.

Passing on rising costs: what corporations say during earnings calls

In McDonald’s first-quarter conference call in April, CFO Kevin Ozan admitted that the iconic chain had issued “strategic price increases” this year to deal with high fuel, labor, and food costs. The move follows a 6% jump in prices at the burger chain in 2021.

When an analyst asked Ozan if he was worried about consumers’ ability to pay for the price hikes in the call, the CFO noted that food prices at grocery stores have been increasing at an even faster pace than in his restaurants, giving him more pricing power.

“So that’s probably been a little benefit,” he said. “We are keeping certainly a close watch on lower-end consumers just to make sure that we’re still providing the right value.”

McDonald’s isn’t alone when it comes to passing off higher costs to consumers. Chipotle hiked its prices roughly 10% in 2021 compared to the previous year, and in the first quarter of 2022, it tacked on another 4% increase.

“Gosh, I really hope we don’t have to take more pricing [measures],” CEO Brian Niccol said on the firm’s April 26 first-quarter conference call. “The good news is, we’ve got the pricing power to make a move…we saw [inflation] wasn’t going away, so we had to take the pricing action that we did.”

Other fast-food companies have been getting rid of value menu deals or raising prices on certain key offerings to get ahead of inflation. Domino’s said in its late April first-quarter conference call that it is facing “significant cost inflation” and has increased the price of its $5.99 mix-and-match offer for the first time in over 12 years to $6.99.

No matter where you look in the fast-food business, costs are rising, but CEOs remain confident about their ability to pass on those costs, at least for now—which means fast-food will likely remain expensive moving forward.

“In recent years, most fast-food restaurants had, maybe, raised prices in the low single digits each year. What we’ve seen over the last six-plus months are restaurants being aggressive in pushing through price [increases],” Matthew Goodman, an industry analyst at the data research firm M Science, told The New York Times in June.

Still, passing on rising costs to consumers can only work for so long, especially when many Americans are beginning to tighten their budgets.

A Morgan Stanley survey of over 2,000 consumers, conducted from June 24 to 27, shows that some two-thirds of Americans are planning to reduce their spending over the next six months in response to inflation. That could mean that some consumers will begin to balk at higher prices through the remainder of the year.

That’s bad news for fast-food companies because input costs are still high. In May, the producer’s price index (PPI), which measures wholesale prices for businesses, rose at a near-record 10.8% annual rate.

That puts a huge strain on the budgets of fast-food companies, but it’s not just the rising cost of meat or potatoes that is causing price increases at the average McDonald’s.

As a result, Wendy’s execs said in May that they were seeing “labor inflation in the high-teens and mid-teens,” and they aren’t alone. Industry-wide, labor inflation has taken a toll on fast-food chains, and finding workers remains a challenge, too.

Domino’s CEO Ritch Allison admitted in March that his company’s same-store sales fell 7% in the bottom 20% of stores where adequate labor was nearly impossible to find.

Securing enough workers has become such a challenge that Frances Allen, the CEO of Checkers & Rally’s Restaurants, which operates 850 fast-food restaurants nationwide, said it may become a permanent feature of the industry.

“The labor market has shrunk. As leaders, we’ve got to actually plan for that shrinkage,” she told Bloomberg, adding that her restaurants are moving toward automation to reduce the impact of missing workers and rising wages.