With Roe overturned, Canada could become an abortion destination. The challenge will be affording the trip 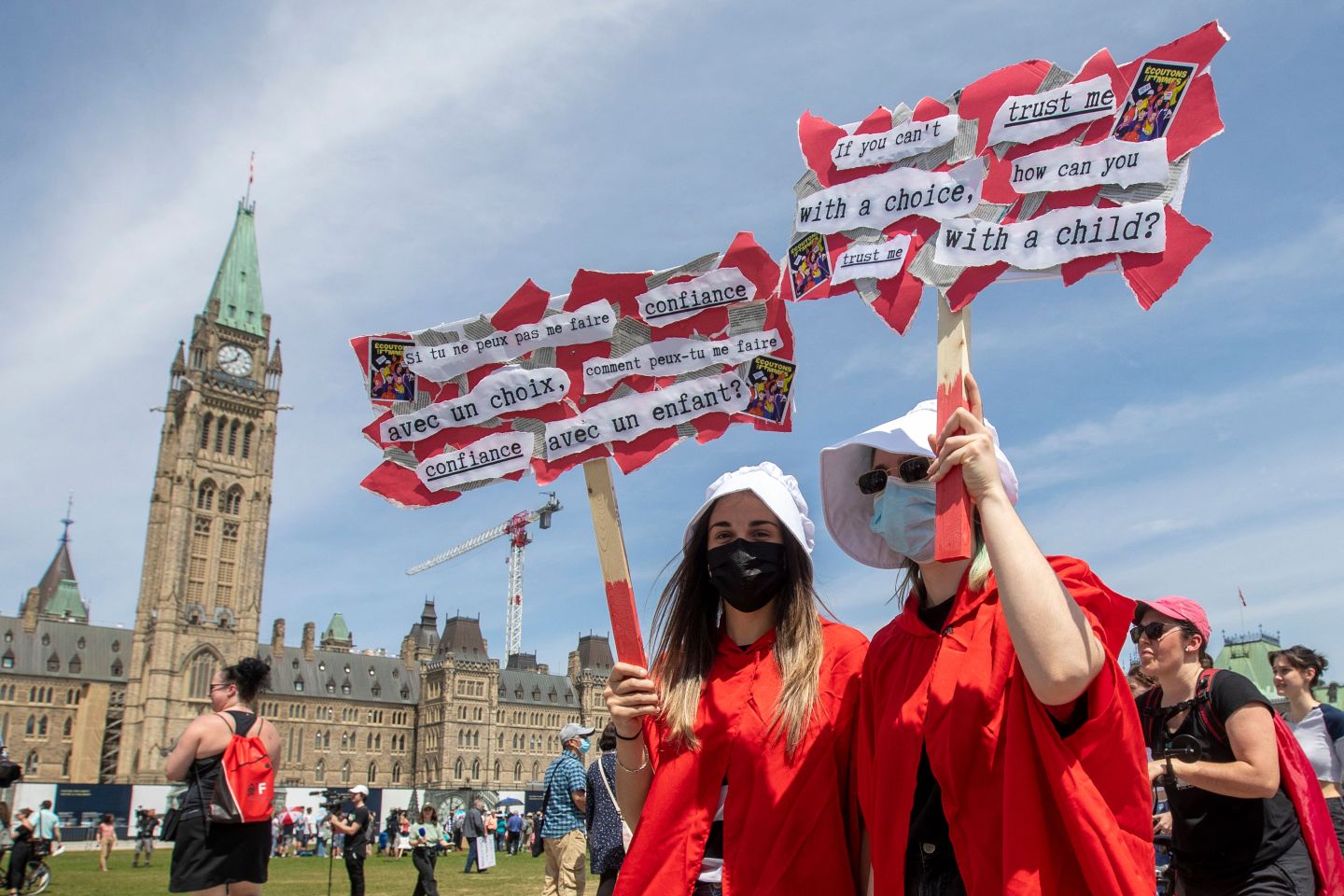 Pro-choice protesters dressed in red robes as characters from The Handmaid's Tale hold signs on Parliament Hill during the National March for Life in Ottawa, Ontario, on May 12.
LARS HAGBERG—AFP via Getty Images

The Bloor West Village Women’s Clinic in Toronto has had very few American patients, despite advertising its abortion services internationally. That may be about to change.

The U.S. Supreme Court’s decision Friday overturning Roe v. Wade means women living in states with new restrictions on abortion could be forced to travel to obtain the procedure. Canada, which has no legal restrictions on abortion, could offer a safe haven for those looking for abortion care, with about half of U.S. states considered “certain or likely” to ban or severely restrict services following the high court’s decision.

The challenge will be affording it. Those needing an abortion still need to be able to pay the cost of travel and for the procedure itself. Travel to Canada also requires a passport and a vaccine card.

“The women who are most vulnerable are not women, most likely, who are going to have passports and the money to do this,” said Sheri Krieger, a counselor at Bloor West. “Certainly we’re open and here to help in any way we can, 100%, that’s for sure, but at this moment we have no sense of what’s going to happen.”

Canadian Prime Minister Justin Trudeau, speaking at a Commonwealth summit, hinted that Canada could be a destination, but offered no specific measures to increase abortion availability or handle more patients at the nation’s clinics.

Trudeau lamented the Supreme Court’s decision as a “devastating setback” to the battle for rights fought by generations of women around the world. “We need to continue to stand strong, to defend everybody’s rights and freedoms in Canada and where we are here, internationally … which Canada will do—whether it’s fighting for women’s rights here in Africa, or supporting people fighting for their rights in the United States and elsewhere,” he said.

Canada could be an option for women in Michigan if they’re willing to travel to Toronto or Hamilton. The Ambassador Bridge links downtown Detroit and Windsor, but the only access to surgical abortions in Windsor is in the hospital. There is no freestanding clinic.

Michigan has a long-dormant abortion ban dating back to 1846 and updated in 1931, that could come back to life. Governor Gretchen Whitmer, a Democrat, believes it will and has filed a lawsuit seeking to have the Michigan Supreme Court declare it unconstitutional. A lower court in May granted a temporary injunction blocking enforcement of the law and Whitmer on Friday filed a brief asking for a quick and permanent decision from the State Supreme Court.

Should Whitmer’s suit fail, women’s rights groups in the state are already looking for other places to send those seeking abortions, said Ashlea Phenicie, communications director for Planned Parenthood of Michigan. Canada is a possible destination, she said, but the group will look to Illinois and New York first because travel to those states is easier.

Abortions are less expensive in Canada than the U.S. Carolyn Egan, a spokesperson for the Ontario Coalition for Abortion Clinics, said the cost of the procedure at a Canadian clinic is about C$500 ($388), but that doesn’t include any travel costs a woman from the US might incur. In Michigan, an abortion costs $600 to $900, according to the Women’s Center of Michigan.

And the Roe decision will complicate things for women on both sides of the border. Some Canadians travel to the US to obtain late-stage abortions—those after 24 weeks. Such a procedure can be difficult to access even in Canada’s big cities because of a lack of physician training. About 95% of abortions in Canada are done before 12 weeks, many via medication.

In addition, there is concern that clinics providing abortion services could be overwhelmed and wait times become insurmountable, said Frédérique Chabot, director of health promotion, at Action Canada for Sexual Health & Rights, a charity that helps advance reproductive health rights.

Most of the clinics that have capacity are in Toronto and Montreal, said Joyce Arthur, executive director of the Abortion Rights Coalition of Canada. But it’s much harder to find clinics in Canada’s western provinces, meaning women in states such as North Dakota and South Dakota—which could soon have new restrictions—will have difficulty finding services. She said it also could promote a system where Canadian practitioners prefer Americans who pay in cash.

“We want to help Americans but it’s difficult because we want to take care of Canadians first,” Arthur said. “It could result in a two-tiered system.”

On average, women wait one to two weeks for an abortion in Canada and as long as five weeks for later-term abortion care, according to Action Canada.

“Even though we have the fully enshrined right to this service, that doesn’t mean that it’s widely available,” said Kelly Bowden, director of Policy, Advocacy and Government Relations at Action Canada for Sexual Health & Rights. “There still continues to be a huge amount of stigma around that access, and so we know that cross-border movement happens in order to access abortion services and we’ve actually seen it from Canada to the U.S.”

Despite the costs and challenges, as American women run out of options at home, some will likely look north.

“I’m sick. I’m heartbroken, I’m disgusted. I don’t even know if I have words to describe it,” Krieger said. “If women do come, and want to come, or to find ways that they can come, I’m sure that there’s going to be lots of people that are going to be ready to help.”