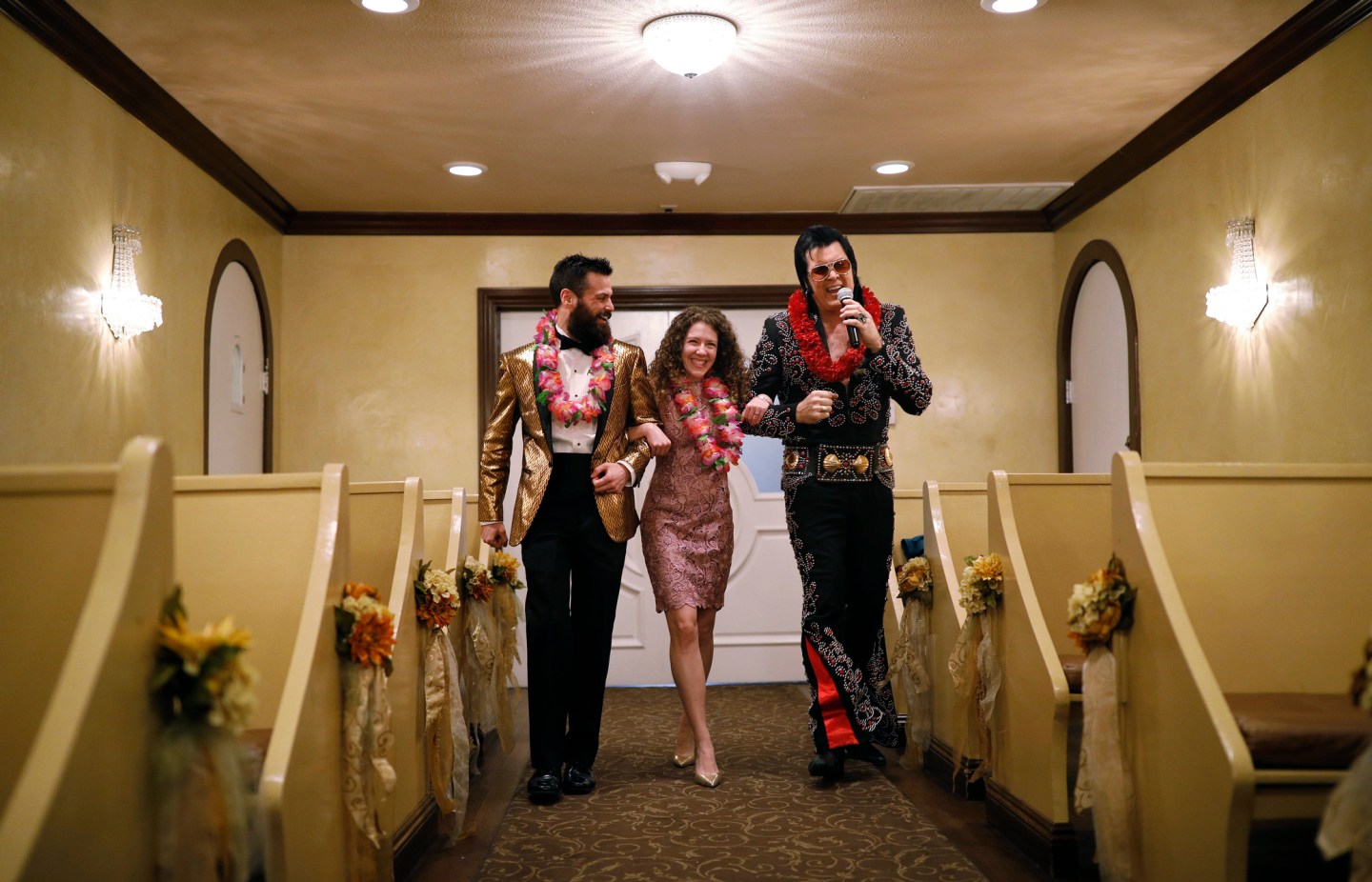 Elvis impersonator Brendan Paul, right, walks down the aisle during a wedding ceremony for Katie Salvatore, center, and Eric Wheeler at the Graceland Wedding Chapel in Las Vegas. Authentic Brands Group sent cease-and-desist letters earlier this month to multiple chapels, saying they had to comply by the end of May, the Las Vegas Review-Journal reported.
John Locher—AP

Las Vegas chapels of love that use Elvis Presley’s likeness could find themselves becoming Heartbreak Hotels.

The licensing company that controls the name and image of “The King” is ordering Sin City chapel operators to stop using Elvis in themed ceremonies, the Las Vegas Review-Journal reported on Monday. Authentic Brands Group sent cease-and-desist letters in early May to multiple chapels, which are expected to be compliant by now.

With Elvis so closely tied to Vegas’ wedding industry, some say the move could decimate their businesses.

“We are a family-run business, and now we’re hanging with the big dogs,” said Kayla Collins, who operates LasVegasElvisWeddingChapel.com and the Little Chapel of Hearts with her husband. “That’s our bread and butter. I don’t get it. We were just hitting our stride again through COVID, then this happens.”

Clark County Clerk Lynn Goya, who led a marketing campaign promoting Las Vegas as a wedding destination, said the order for chapels to stop using Elvis couldn’t have come at a worse time for the sector.

“It might destroy a portion of our wedding industry. A number of people might lose their livelihood,” Goya said.

One chapel last weekend had its Elvis impersonator change instead into a leather jacket, jeans and a fedora for a “rock ‘n’ roll” themed ceremony, the Review-Journal reported.

Graceland Wedding Chapel, which performs 6,400 Elvis-themed weddings per year, has not been served a warning yet, according to manager Rod Musum.

Authentic Brands Group did not immediately respond Tuesday to an emailed request for comment.

In the cease-and-desist letter, the company said it will halt unauthorized use of “Presley’s name, likeness, voice image, and other elements of Elvis Presley’s persona in advertisements, merchandise and otherwise.” The letter also said “Elvis,” “Elvis Presley,” “and “The King of Rock and Roll” are protected trademarks.

The order should not translate into legal action against Elvis-themed stage shows in Las Vegas such as “All Shook Up” because impersonating someone for live performances such as shows is considered an exception under Nevada’s right of publicity law, according to Mark Tratos, a local attorney who helped write the statute.

“An Elvis show is a performer essentially entertaining others by re-creating that person onstage,” Tratos said.

Kent Ripley, whose business is called Elvis Weddings, said he has never run into this issue in 25 years of performing as Elvis.

“They want to protect the Elvis brand. But what are they protecting by taking Elvis away from the public?” Ripley asked.