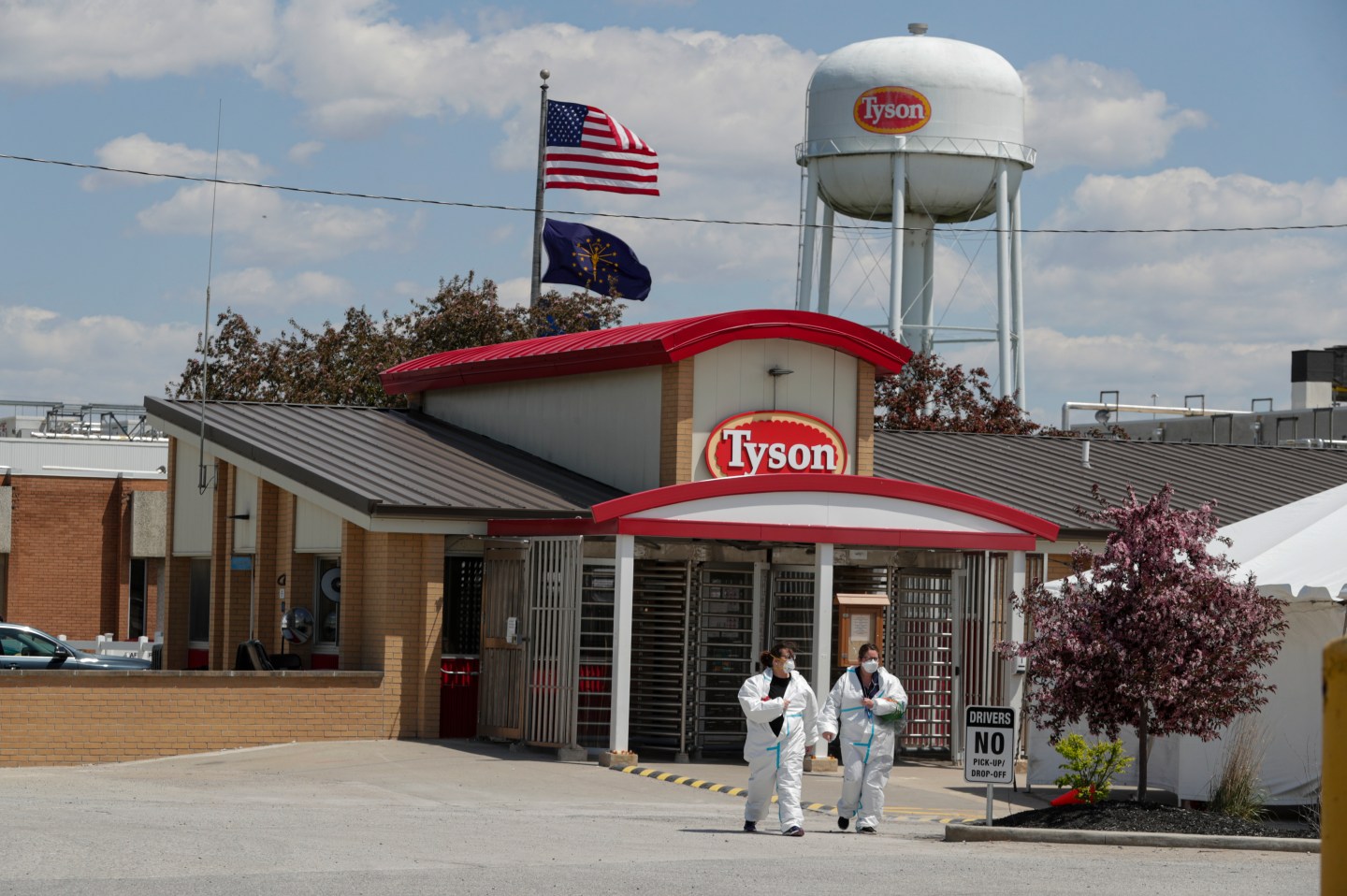 In this May 7, 2020 file photo, workers leave the Tyson Foods pork processing plant in Logansport, Ind. At the height of the pandemic, the meat processing industry worked closely with political appointees in the Trump administration to stave off health restrictions and keep processing plants open even as COVID-19 spread rapidly among workers, according to a new Congressional report released Thursday, May 12.
Michael Conroy—Associated Press file

OMAHA, Neb.—During the first year of the COVID-19 pandemic, the meat processing industry worked closely with political appointees in the Trump administration to stave off health restrictions and keep slaughterhouses open even as the virus spread rapidly among workers, according to a congressional report released Thursday.

The report by the House’s Select Subcommittee on the Coronavirus Crisis said meat companies pushed to keep their plants open even though they knew workers were at high risk of catching the coronavirus. The lobbying led to health and labor officials watering down their recommendations for the industry and culminated in an executive order President Donald Trump issued in spring 2020 designating meat plants as critical infrastructure that needed to remain open.

Democratic Rep. Jim Clyburn, who leads the subcommittee, said U.S. Department of Agriculture officials and the industry prioritized production and profits over the health of workers and communities as at least 59,000 workers caught the virus and 269 died.

“The shameful conduct of corporate executives pursuing profit at any cost during a crisis and government officials eager to do their bidding regardless of resulting harm to the public must never be repeated,” Clyburn said.

Former Agriculture Secretary Sonny Perdue, who now leads the University System of Georgia, declined to comment Thursday. A spokesman for the university system said Perdue is focused on “serving the students of Georgia.”

The report is based on communications among industry executives, lobbyists and USDA officials and other documents the committee received from government agencies, Tyson Foods, Smithfield Foods, JBS, Cargill, National Beef, Hormel and other companies. Those firms control 85% of the beef market and 70% of pork production nationwide.

The North American Meat Institute trade group said the report distorts the truth and ignores the steps companies took as they spent billions to retool plants and purchase protective gear for workers.

“The House Select Committee has done the nation a disservice,” the trade group’s President and CEO Julie Anna Potts said. “The Committee could have tried to learn what the industry did to stop the spread of COVID among meat and poultry workers, reducing positive cases associated with the industry while cases were surging across the country. Instead, the Committee uses 20/20 hindsight and cherry picks data to support a narrative that is completely unrepresentative of the early days of an unprecedented national emergency.”

A major union that represents workers at the processing plants condemned the way the Trump administration helped the industry.

“We only wish that the Trump Administration cared as much about the lives of working people as it did about meat, pork and poultry products, when we wanted poultry plants to shut down for deep cleaning and to save workers’ lives,” said Stuart Appelbaum, president of the Retail, Wholesale and Department Store Union.

The report said meat companies were slow to take measures to protect workers from the virus and pushed to make government recommendations to require masks to be worn, install dividers between work stations and encourage social distancing in their plants optional.

But JBS spokeswoman Nikki Richardson said the company “did everything possible to ensure the safety of our people who kept our critical food supply chain running.”

Tyson Foods spokesman Gary Mickelson echoed that sentiment and said Tyson has worked closely with both the Trump and Biden administrations, along with state and local officials, to respond to the pandemic’s challenges.

Smithfield spokesman Jim Monroe said the industry reacted quickly, and Smithfield has spent more than $900 million so far to protect workers. He said it was appropriate for meat companies to share their concerns with government officials as the pandemic unfolded.

But the report cited a message that a Koch Foods executive sent a lobbyist in the spring of 2020 that said the industry shouldn’t do more than screen employees’ temperatures at the door of plants. The lobbyist agreed and said, “Now to get rid of those pesky health departments!”

To that end, the report said USDA officials — at the behest of meat companies — tried to use Trump’s executive order to stop state and local health officials from ordering plant shutdowns.

Even with those efforts, U.S. meat production fell to about 60% of normal during spring 2020 because a number of major plants were forced to temporarily close for deep cleaning, widespread testing and safety upgrades, or operated at slower speeds because of worker shortages. Companies closed plants in consultation with health officials after outbreaks were confirmed.

“Throughout the pandemic we’ve worked hard to maintain safe and consistent operations. At the same time, we have not hesitated to temporarily idle or reduce capacity at processing plants when we determined it necessary to do so,” Cargill spokesman Daniel Sullivan said.

Documents the companies provided to the committee showed that meat companies pushed hard for the executive order partly because they believed it would help shield them from liability if workers got sick or died — something a federal appeals court later rejected in a lawsuit against Tyson over worker deaths at an Iowa plant. Emails show the companies themselves submitted a draft of the executive order to the administration days before it was issued.

Early on in the pandemic, meat companies knew the virus was spreading rapidly among their workers because infection rates were much higher in the plants and their surrounding communities. The report said that in April 2020, a doctor at a hospital near a JBS plant in Cactus, Texas, told the company and government officials in an email that there was clearly a major outbreak at the plant because every COVID-19 patient at the hospital either worked there or was related to a worker. “Your employees will get sick and may die if this factory remains open,” the doctor warned.

The report also highlighted the way meat companies aggressively pushed back against safety recommendations from the Centers for Disease Control and Prevention and the Occupational Safety and Health Administration. That led to the final guidance including language that effectively made the rules optional because it said the recommendations should be done “if feasible” or “where possible.”