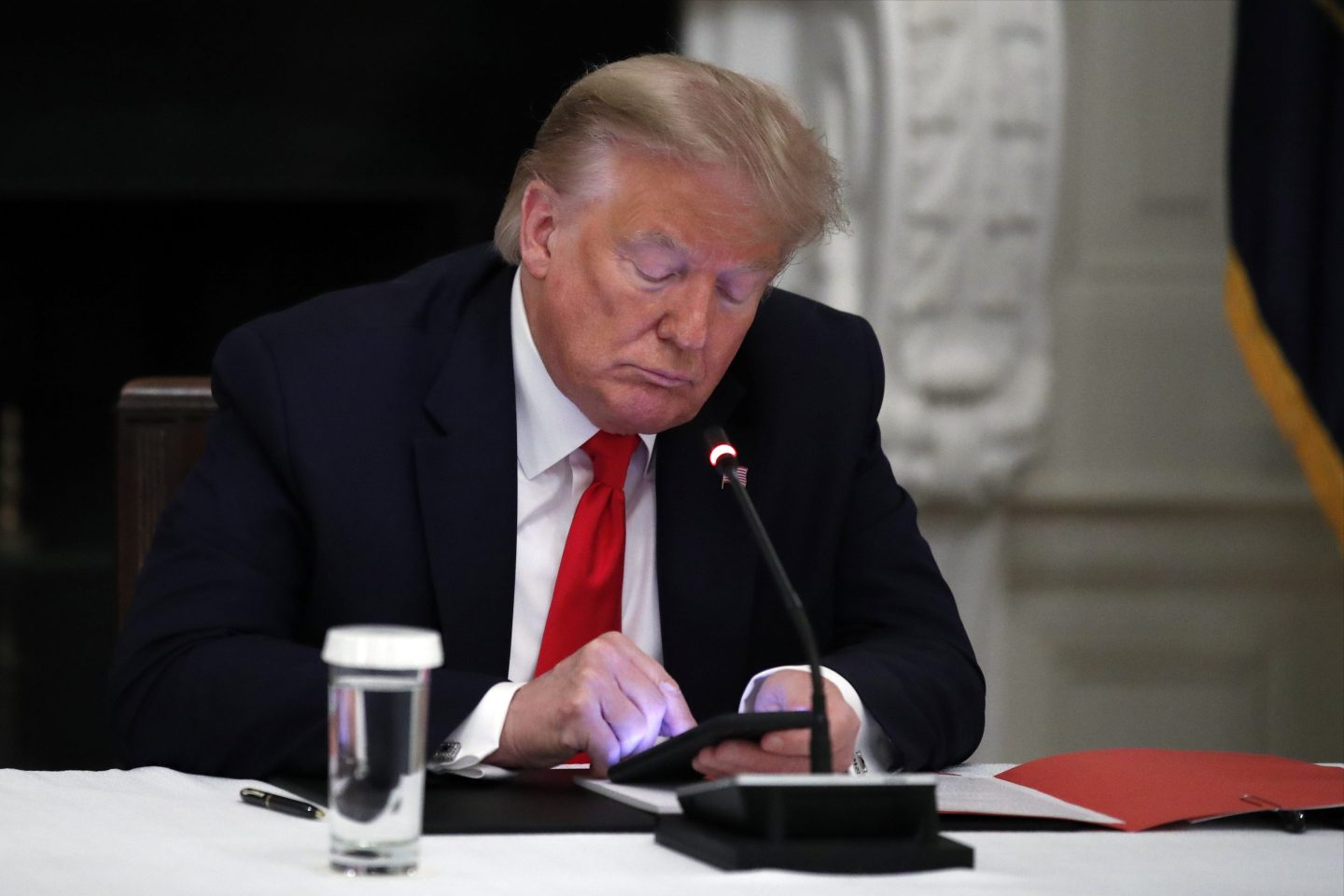 Former President Donald Trump looks at his phone during a roundtable with governors on the reopening of America's small businesses, in the State Dining Room of the White House in Washington, June 18, 2020. A San Francisco judge has rejected Trump's lawsuit challenging his lifetime ban from Twitter.
Alex Brandon—Associated Press

“The amended complaint merely offers a grab-bag of allegations to the effect that some Democratic members of Congress wanted Mr. Trump, and ‘the views he espoused,’ to be banned from Twitter because such ‘content and views’ were ‘contrary to those legislators’ preferred points of view,’” Donato wrote. “But the comments of a handful of elected officials are a far cry from a ‘rule of decision for which the State is responsible.’ Legislators are perfectly free to express opinions without being deemed the official voice of ‘the State.’”

The platforms suspended Trump after the Jan. 6, 2021, insurrection, in which his followers violently stormed the Capitol building in an attempt to block Congress from certifying Joe Biden’s presidential win. The companies cited concerns he would incite further violence.

The ruling comes as Elon Musk, the world’s wealthiest man, is in the process of purchasing Twitter for $44 billion. The deal has raised questions about whether, Musk, a self-described free speech absolutist, would reinstate the former president.

Trump, who has continued to repeat lies about his 2020 election defeat in speeches, has started his own social network, Truth Social. He said last week that he wouldn’t rejoin Twitter if given the chance.

The suit had sought to reinstate Trump’s account, which had roughly 89 million followers, and those of five others who claimed they were also censored by Twitter. The group had sought unspecified damages and class action status on behalf of others removed from the platform.

Legal experts had predicted the lawsuit would fail but suggested Trump would milk it for political purposes. Trump’s political action committee immediately began raising money after the lawsuit was announced last year.

The lawsuit had also sought a declaration that Section 230 of the 1996 Communications Decency Act was unconstitutional.

The act says providers such as Twitter can moderate services by removing obscene posts that violate their standards and cannot be held responsible for content posted by others.

Trump had only shown a “vague and speculative allegation” that he believed he would not have been banned if Twitter wasn’t granted immunity by Section 230, Donato said.

Donato gave Trump another opportunity to amend his complaint. Trump’s lawyer did not immediately respond to a request for comment.