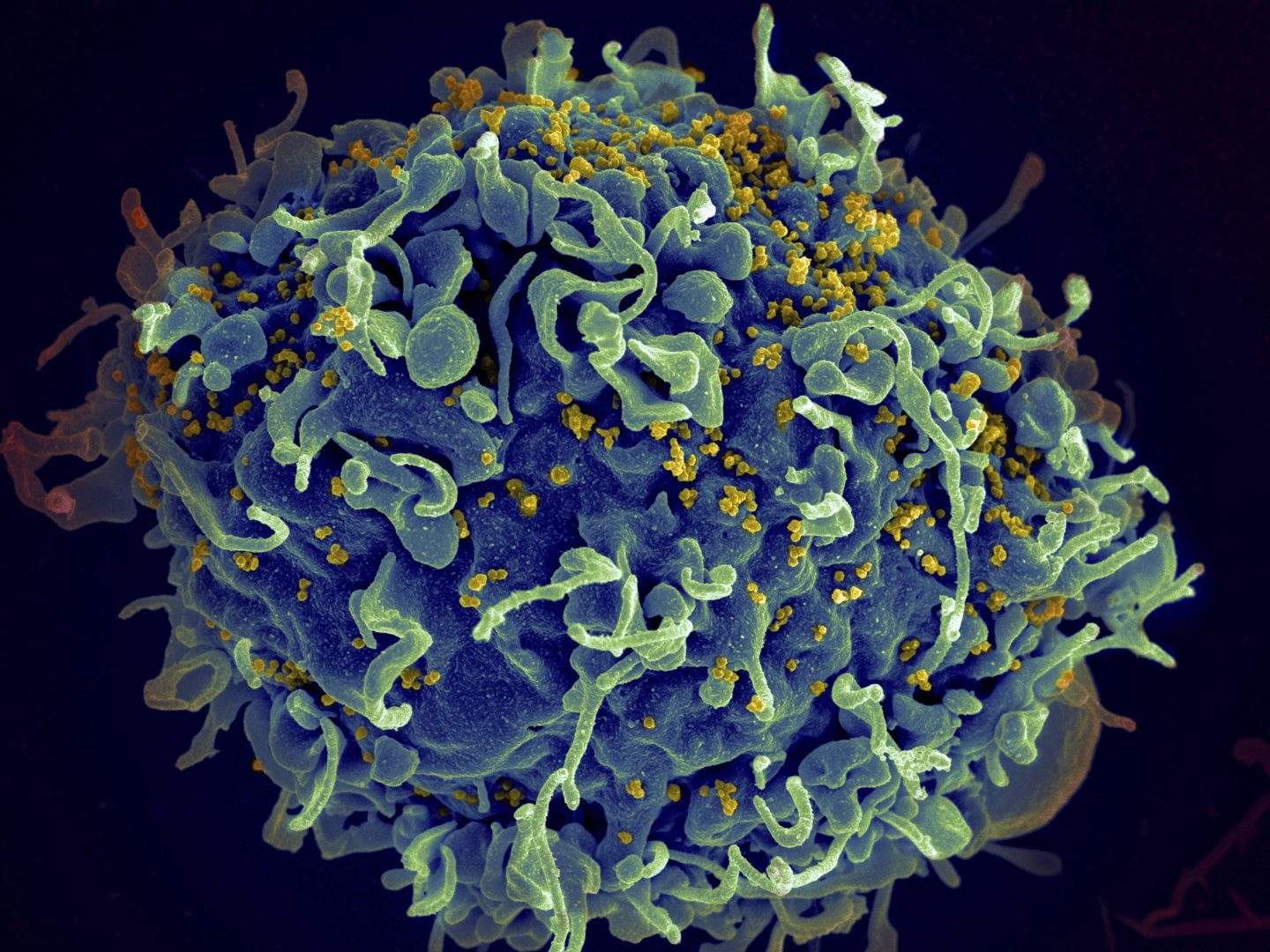 This colorized electron microscope image made available by the U.S. National Institutes of Health shows a human T cell, indicated in blue, under attack by HIV, in yellow, the virus that causes AIDS. In a study released in the journal Nature on April 28, 2022, climate change will result in thousands of new viruses spread among animal species by 2070, which is likely to increase the risk of emerging infectious diseases jumping from animals to humans.
Seth Pincus, Elizabeth Fischer, Austin Athman—National Institute of Allergy and Infectious Diseases/NIH/AP

Climate change will result in thousands of new viruses spread among animal species by 2070—and that’s likely to increase the risk of emerging infectious diseases jumping from animals to humans, according to a new study.

This is especially true for Africa and Asia, continents that have been hotspots for deadly disease spread from humans to animals or vice versa over the last several decades, including the flu, HIV, Ebola and coronavirus.

Researchers, who published their findings Thursday in the journal Nature, used a model to examine how over 3,000 mammal species might migrate and and share viruses over the next 50 years if the world warms by 2 degrees Celsius (3.6 degrees Fahrenheit), which recent research shows is possible.

They found that cross-species virus spread will happen over 4,000 times among mammals alone. Birds and marine animals weren’t included in the study.

Researchers said not all viruses will spread to humans or become pandemics the scale of the coronavirus but the number of cross-species viruses increases the risk of spread to humans.

The study highlights two global crises—climate change and infectious disease spread—as the world grapples with what to do about both.

Previous research has looked at how deforestation and extinction and wildlife trade lead to animal-human disease spread, but there’s less research about how climate change could influence this type of disease transmission, the researchers said at a media briefing Wednesday.

“We don’t talk about climate a lot in the context of zoonoses” — diseases that can spread from animals to people, said study co-author Colin Carlson, an assistant professor of biology at Georgetown University. “Our study … brings together the two most pressing global crises we have.”

Experts on climate change and infectious disease agreed that a warming planet will likely lead to increased risk for the emergence of new viruses.

Daniel R. Brooks, a biologist at University of Nebraska State Museum and co-author of the book “The Stockholm Paradigm: Climate Change and Emerging Disease,” said the study acknowledges the threat posed by climate change in terms of increasing risk of infectious diseases.

Aaron Bernstein, a pediatrician and interim director of The Center for Climate, Health, and the Global Environment at Harvard T.H. Chan School of Public Health, said the study confirms long-held suspicions about the impact of warming on infectious disease emergence.

“Of particular note is that the study indicates that these encounters may already be happening with greater frequency and in places near where many people live,” Bernstein said.

Study co-author Gregory Albery, a disease ecologist at Georgetown University, said that because climate-driven infectious disease emergence is likely already happening, the world should be doing more to learn about and prepare for it.

“It is not preventable, even in the best case climate change scenarios,” Albery said.

Carlson, who was also an author on the latest report from the Intergovernmental Panel on Climate Change, said we must cut greenhouse gas and phase out fossil fuels to reduce the risk of infectious disease spread.

“African and Asian nations face the greatest threat of increased virus exposure, once again illustrating how those on the frontlines of the crisis have very often done the least to create climate change,” Browne said.