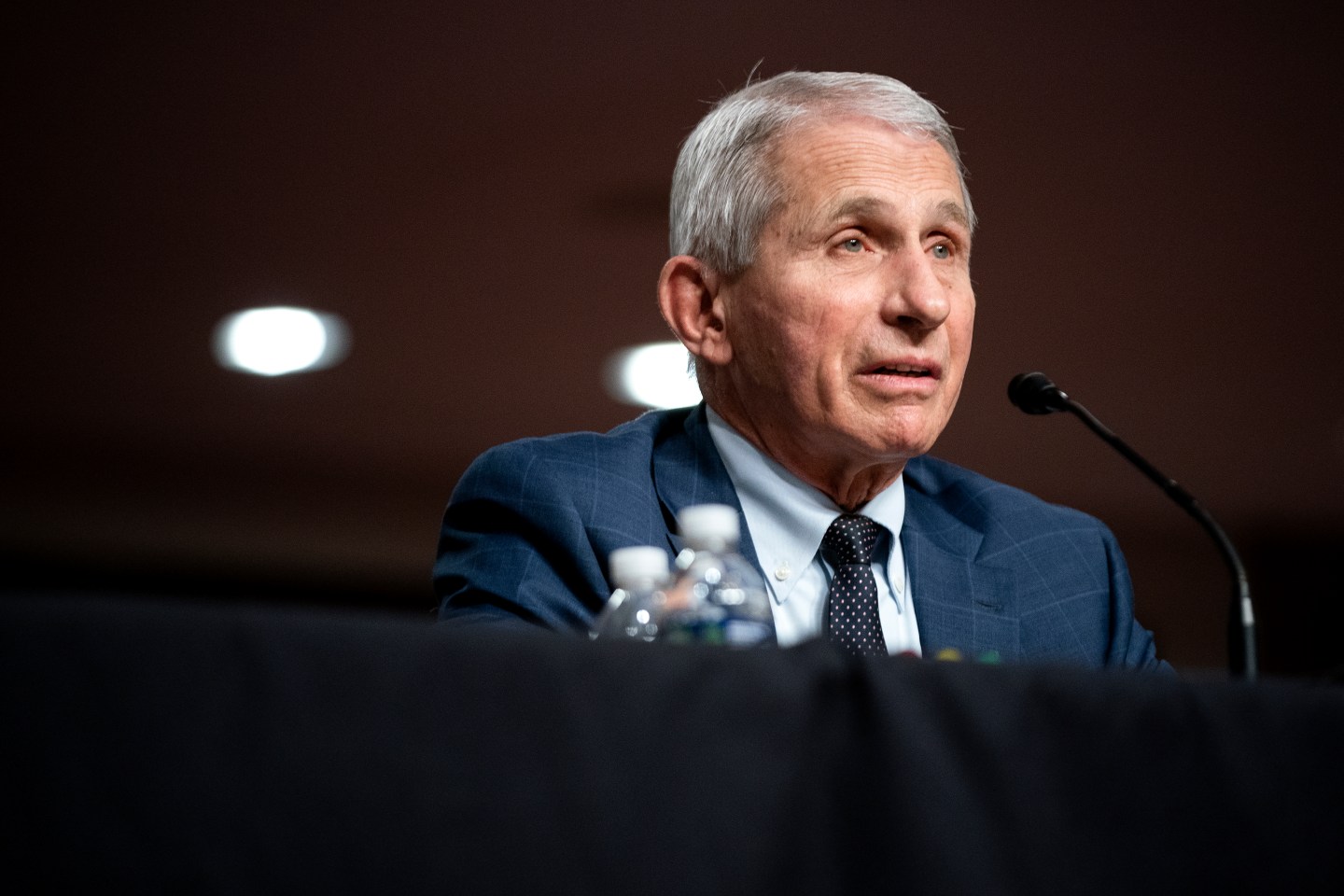 It was a viral moment that elicited both nervous laughs and tears of joy from a pandemic-weary nation: Colorado Gov. Jared Polis awaiting his state’s first COVID vaccine shipment in December 2020, staring at a delivery door like a child stares at a fireplace on Christmas Eve.

“Any minute now we’re going to hear a doorbell,” Polis says with childlike glee, his words muffled by a surgical mask.

“And then we’re going to…” He dramatically pauses before saying, “of course, let the vaccine in.”

Before he finishes his sentence, a bell shrieks.

“Ope, there we go!” Polis exclaims, making a rapid rotation to hit a button and open the warehouse door.

“This is the Pfizer vaccine, arriving here in Colorado, to end the pandemic!” he exclaims as the door opens slowly, awkwardly revealing a delivery man who perhaps wasn’t aware he’d been chosen to save mankind—or at least Coloradans.

Polis’s giddy anticipation mirrored the mental state of so many Americans in those weeks before Christmas 2020. The potential side effects were unnerving, maybe, but the vaccine was coming.

To end the pandemic and nine months of isolation and tragedy.

That was the hope. But it wasn’t reality.

“I think some of it is just human nature, that you want to believe there will be a quick technological fix,” Fractal Therapeutics CEO Arijit Chakravarty told Fortune. His position is summed up by the headline of his searing new article published to Lancet-affiliated preprint journal medRxiv: “Endemicity is not a victory: the unmitigated downside risks of widespread SARS-CoV-2 transmission.”

Scenarios under which the U.S. sees surges of a variant more deadly than any seen before are plausible, Chakravarty and his colleagues contend.

Hundreds of thousands of deaths could ensue annually, they say. COVID could become the No. 1 cause of death in the U.S., beating out the most common maladies like heart disease and cancer.

“It’s not a specific prediction about the future,” Chakravarty hedged. “We’re not saying the world will end on Tuesday, April 7, 2024. But the goal is to make people say, ‘Gee, some scenarios out there are really quite ugly.’”

Chakravarty isn’t alone in worrying about what happens next. He has good company in Dr. Anthony Fauci, the infectious disease expert who has become the face of America’s COVID response. Fauci said this week that a surge of COVID is likely this fall, and an increase in cases over even the next few weeks would not be surprising.

Fauci’s remarks contrast with a sudden vanishing of the Omicron wave that gripped the country in December and January (and ruined many people’s holiday plans). Cases fell so far so fast that big cities like New York relaxed mandates that had been in place for nearly two years. In New York’s case, famously unvaccinated celebrities like basketball star Kyrie Irving are free to play indoors again, and masks are off at most restaurants and retail outlets, bringing it in line with the rest of the country.

March is seeing cases creep back up again as bosses consider a widespread return to the office.

When it comes to the blissful oblivion of many to the pandemic’s continued existence, “motivated reasoning” is to blame, says psychologist Paul Thagard, a philosopher and cognitive scientist who authored the paper The Cognitive Science of COVID-19: Acceptance, Denial, and Belief Change.

Another term for motivated reasoning: “a complicated version of wishful thinking.”

“People look at what makes them happy instead of evidence,” Thagard says. “This virus has been very unpredictable. People want to believe it’s going to get better and better. It’s not based on solid knowledge of the biology of the virus.”

If another severe wave of COVID were to hit the U.S., Thagard predicts the country would see a similarly large wave of denial, “one more application of motivated reasoning.”

Current vaccines have failed to end the pandemic.

That’s a key argument Chakravarty and his coauthors make in their new paper.

“Public health authorities in many countries have advocated for a strategy of using the vaccines to limit morbidity and mortality while permitting unchecked SARS-CoV-2 spread (‘learning to live with the disease’),” Chakravarty’s team writes.

But that strategy seems to rely on future waves of COVID being less deadly, either due to weaker but more transmissible strains of the virus taking hold, or due to population immunity that is inevitably temporary, the authors write. And it ignores the fact infection fatality rates of future COVID variants may wax and wane.

“Omicron was mild. Maybe if there’s a BA.3, it will be mild too,” Chakravarty says. “But just because it was named Omicron 3 doesn’t mean it couldn’t be its own beast.” (Editor’s note: BA.3 was announced by the World Health Organization (WHO) in March. However, nearly simultaneous with Chakravarty’s interview, the WHO announced it is tracking BA.4 and BA.5 subvariants, showing the propensity of the virus to mutate, and the speed at which it can.)

“We, as a team, went back and forth—this took months to write,” he says. “Emotionally, it’s a difficult conclusion to come to. It doesn’t help you sleep well at night.”

Regarding COVID, “you have to mitigate the risk of the worst thing without having a big debate about whether or not it’s going to happen today. People aren’t really having that conversation.”

He and his colleagues realize an approach like China’s zero-COVID policy isn’t sustainable. The team recommends an approach of “subtle changes” that “don’t require endless amounts of personal sacrifice,” and that “slow down evolution and work on limiting the spread.”

Among their proposals: upgrading air quality and ventilation in buildings, since most transmission occurs indoors; widespread surveillance of virus transmission; and focusing on the development of preventative medicines and next-generation vaccines that can reduce the spread.

But with Congress bickering over a $10 billion COVID aid bill and the U.S. running out of funds for things like vaccines and research, the U.S. is quickly losing its ability to “see what’s happening and react nimbly.”

A WHO official recently said we may be entering a “period of cease-fire” with the virus, but Chakravarty says “it takes two parties to agree to a cease-fire. Another word for a one-way cease-fire? Surrender.”

“We get comfortable with what happens”

Chakravarty says America is now rolling the dice with its COVID strategy.

In short: The American approach to COVID seems to be “ignore it and hope it goes away, and hope the interventions we have right now are functional enough to make it tolerable,” he says.

“And the answer is, not yet. We have good tools. We’re better than we were two years ago, but this virus is pretty tricky. It’s fooled us every time we thought we understood something.

“In many ways, we were unprepared and playing catch-up.”

COVID isn’t the only public health crisis about which Americans have become complacent, Benjamin says.

“We get tired of an issue,” he says. “We park it. We get comfortable with what happens. Thousands of people die from gun violence every year. That’s something that, when it happens, particularly mass shootings, everyone says, ‘It’s terrible. We must do something.’

“But the political will to do something about it quickly fades.”

He worries the most about politicians getting COVID fatigue and potentially failing to pass another COVID aid bill to fund, among other things, surveillance of the virus and research on new variants.

“Resource allocators have a tendency to, when something happens, throw a lot of money at it—usually not quite enough, never for long enough,” he says. “Then they withdraw funding, and their expectation of performance far exceeds the money put into it.

This isn’t the first time Americans have turned a blind eye toward disease, says John M. Barry, author of The Great Influenza: The Story of the Deadliest Pandemic in History.

The flu, an H1N1 virus thought to have originated in birds, was first identified in the U.S. in the spring of 1918. It spread worldwide in waves, infecting about a third of the world’s population and killing at least 50 million, with about 675,000 deaths in the U.S. alone, according to the U.S. Centers for Disease Control and Prevention. Many were previously healthy young adults and young children.

When it comes to America’s collective memory, the flu pandemic was left out, a seeming historical amnesia.

“That’s the single question I was asked most when my book came out in 2004: ‘How come I never heard of this?’” he says.

He’s not entirely sure, though it might have something to do with people at the time being more accustomed to death by infectious disease, World War I, and historians writing about “what people did to people,” but not about what nature did to people.

Thagard offers a cautionary tale: a fourth wave of the 1918 flu pandemic that came in 1920 at a time when the public was weary.

“They pretty much entirely ignored it—and the fourth wave, in some cities, was the deadliest yet,” Barry says.