Indonesia is building a new, high-tech capital city to symbolize its reformed future. That was the dream, at least 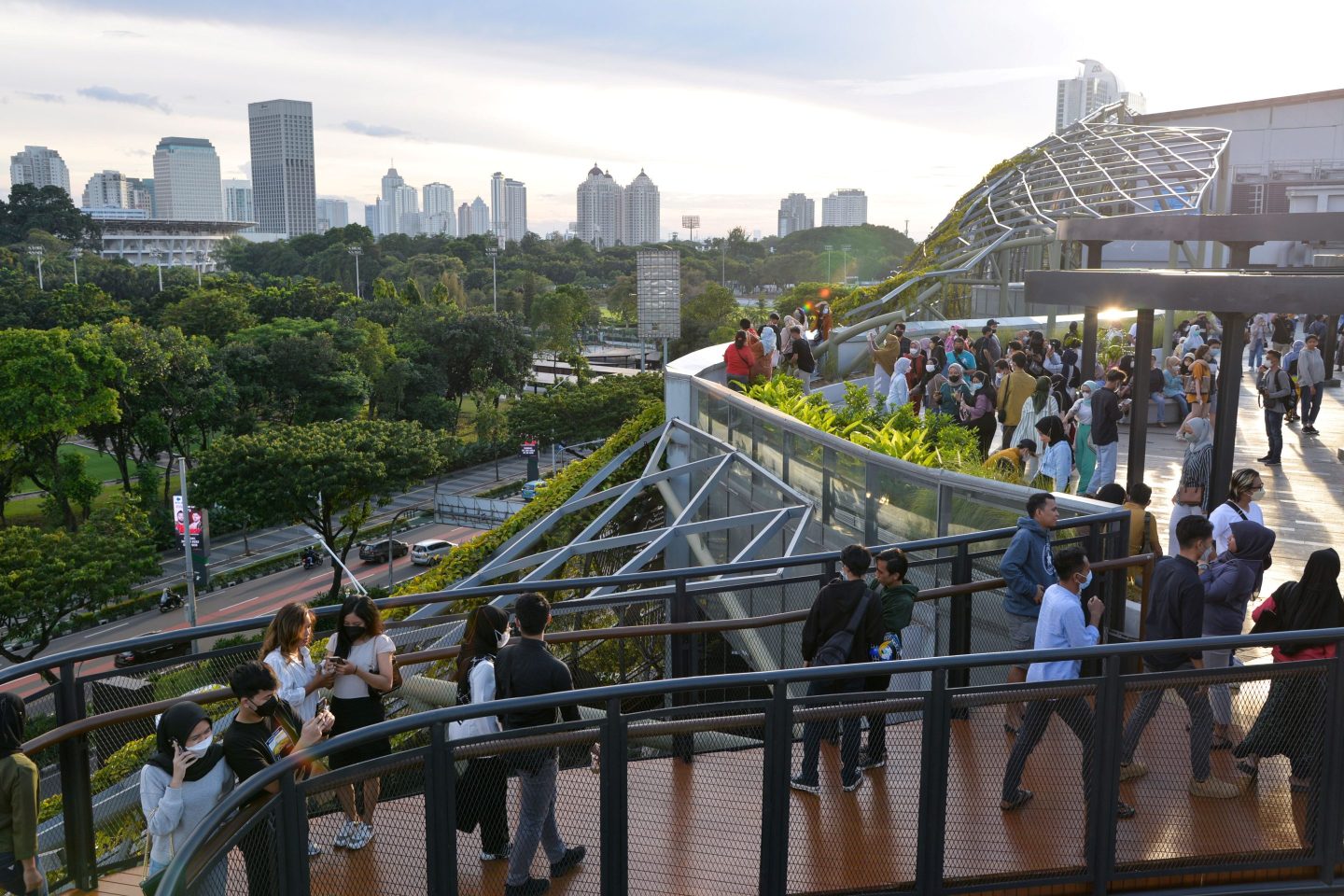 When Indonesian President Joko Widodo announced his plan to build a new capital city back in 2019, he promised a clean, green, high-tech Utopia. Located on the island of Borneo, the new capital would be a rainforest metropolis featuring meandering waterways and bold, contemporary architecture nestled under a tropical forest canopy. A sleek, high-speed transport system would whisk inhabitants between urban clusters organized to support innovation in high-value sectors like education, health and tech.

Jokowi, as the president is popularly known, was elected in 2014 on a promise to transform Indonesia’s economy, long hobbled by red tape and corruption, into a modern, market-oriented system with first-rate infrastructure sure to burnish the nation’s appeal to foreign investors. Nusantara, the name chosen for the new capital, was to be the gleaming, $32.5 billion centerpiece of Jokowi’s grand vision for Indonesia’s future.

That was the dream. The reality is more complicated. After a long COVID-related delay, the Indonesian parliament in January passed legislation to put Jokowi’s plan for Nusantara into action. But the project’s momentum is faltering. Anti-corruption campaigners have made allegations of graft against the government, and environmental groups have attacked the city’s green credentials, suggesting that the new capital may end up being just as gas-guzzling as the current one, Jakarta.

Investors, too, are bolting. Masayoshi Son, the founder and CEO of Softbank, was among those who initially seemed interested in funding the project. He had floated the idea of pumping up to $40 billion into Nusantara. Earlier this month, he officially backed out of the plan without explanation. Rather than being a symbol of Indonesia’s new economy, Nusantara is weighed down by old problems.

Indonesia would not be the first country to build a new capital. Brazil swapped Rio de Janeiro for the purpose-built city of Brasilia in 1960. Nigeria moved its capital from Lagos to Abuja a decade later. In the last 20 years, Malaysia, Kazakhstan and Myanmar have all done the same. Japan has debated moving central government agencies out of Tokyo for decades.

The problem isn’t building a new city so much as persuading people to move there. Brasilia was meant to encourage inland growth beyond coastal cities. But for decades it remained a dull “office campus for a government,” as one architect put it, whose bored inhabitants fled to Rio on the weekends. Hardly anyone lives in Naypyidaw, the colossal capital of Myanmar that occupies a site six times larger than New York City. Even lawmakers and government officials commute hundreds of miles for meetings while continuing to live in Yangon. In 2000, Malaysia made the sensible decision to locate its new capital, Putrajaya, just 25 miles from its old one, Kuala Lumpur, so that it functioned as a kind of administrative suburb. The government had moved, but people didn’t have to.

Construction of the Ministry Of Justice In Putrajaya, Malaysia.
Patrick Aventurier—Gamma-Rapho/Getty Images

Indonesia cannot follow Malaysia’s example; it has to look further afield. Jakarta, home to more than 10 million people, is sinking. A combination of subsiding land and rising seas will put a quarter of the city underwater by 2050. What’s more, Jakarta is on the island of Java, which lies on a fault line that makes it vulnerable to earthquakes, volcanic eruptions, and tsunamis.

“Basically, right now you have the specter of a giant calamity,” says Kevin O’Rourke, an independent analyst based in Jakarta. East Kalimantan, the region of Borneo picked for the site of Nusantara, is more than 600 miles away and safe by comparison. If the worst happened in Jakarta, the government could at least continue to function.

The site also brings economic and political advantages. Java is one of 17,000 islands in the Indonesian archipelago, but it accounts for over 60% of its GDP. Jokowi hopes that the new city will spur growth in other regions. He also wants to shift the political center of gravity. In such a vast island chain, home to over 270 million people, there has long been a risk of political divisions between geographically distant regions. East Kalimantan lies roughly in the center of the country, which makes it a convenient symbol of unity.

But if the rationale for moving the capital is sound, the practice has been anything but. Take energy. Although Jokowi has touted Nusantara as environmentally friendly and plans to generate power from a hydroelectric plant, that infrastructure is a long way from being ready. Coal and gas—widely available in the area—will power the new capital, at least initially. Rather than breaking with the pollution of Jakarta, whose energy comes mainly from coal-fired power stations, the new capital is likely to replicate Jakarta’s hunger for fossil fuels. “I think there will be quite a lot of emissions, especially in the first decade or so,” O’Rourke says.

If and when Nusantara switches to renewables, the source will be a giant dam on the Kayan River in North Kalimantan, which is being built by the same company that developed the Three Gorges Dam in China. While the landscape around the capital site itself has been decimated by decades of mining and oil-palm planting, the watershed along the Kayan River is ecologically sensitive. “When we talk about the environmental impact of the capital,” says O’Rourke, “we have to look beyond the site of the city itself.”

Nusantara’s opponents suspect foul play. In 2019, a group of non-government organizations, including the Mining Advocacy Network and Trend Asia, examined who owned the land on the site of the proposed city. They came up with a who’s who of Indonesia’s industrial and political elite. Among the names were Prabowo Subianto, Jokowi’s defense minister and a former presidential candidate, along with Prabowo’s brother and his nephew. A company controlled by Jokowi’s minister for maritime affairs owns vast coal-mining interests there too.

Critics of the project fear that oligarchs are using the capital project for personal gain. “We are concerned about who is getting the benefits,” says Arie Rompas of Greenpeace’s Indonesian branch. Rompas says contracts for coal power and water supply already have been awarded to industrialists close to the government. Prabowo’s brother told a press conference last December that he owned the land long before the site was chosen for the new city, and that “there have been no political deals.”

Then there is the question of how the city will be governed. Jokowi has set up a body called the Capital City Authority to run Nusantara. Critics argue that it is undemocratic. “The government is not concerned with public participation, and this is reflected in how they have designed the structure,” says Yance Arizona, a lecturer in constitutional law at Indonesia’s Gadjah Mada University. Unlike other Indonesian cities and provinces, which are run by elected mayors and governors, there will be no elected officials to oversee how the authority operates. “Local communities cannot raise their concerns,” Arizona says. “It seems the government is creating a capital city without democracy.”

The capital project is not an isolated example of Jokowi’s authoritarian tendencies. When he was elected president in 2014, Jokowi seemed like a break from the past. Indonesia, southeast Asia’s most populous country and biggest economy, endured more than 30 years of dictatorship under General Suharto. After Suharto was toppled in 1998 the oligarchs who had grown rich under his regime continued to dominate politics, along with the country’s military. Jokowi was different. A man from humble origins who made furniture before entering politics, he built a reputation as an open, collaborative, and forward-thinking reformer.

But increasingly Jokowi seems to view the democratic ideals that drove his rise as obstacles to his economic agenda. In 2020, he introduced a package of reforms designed to simplify regulation and reduce the burden on businesses. The legislation made it easier for companies to fire people and reduced the minimum wage, just as Indonesians were being clobbered by COVID-related layoffs. When thousands took to the streets to protest, police arrested them. The government also has jailed opposition politicians and gutted the agency that investigates corruption. “This style of government reminds people of the New Order,” says Arizona, referring to Suharto’s dictatorial regime.

Nusantara is putting Jokowi at odds with popular opinion once again. As Indonesia begins to recover from the pandemic, there is scant support for spending tens of billions of dollars of public money on the development. Rising energy costs are putting further strain on the budget. But that isn’t stopping Jokowi, who has set an accelerated timeline for his new city (which his opponents sometimes call “Jokowigrad”). Earlier this month, he visited the site for a ceremony to mark the start of construction. He wants several government departments and their civil servants installed there by the time his second and final term ends in 2024. Even Malaysia’s modest move from Kuala Lumpur to Putrajaya took over a decade to complete.

Should Jokowi’s schedule prove impossible, he appears to be considering a neat workaround: in a recent interview, one of his closest political allies discussed the possibility of changing the constitution so that Jokowi could serve a third term to see it through. The president wants Nusantara to exemplify a new Indonesia. The irony is that the project is becoming a showcase of its old, corrupt ways of governing.