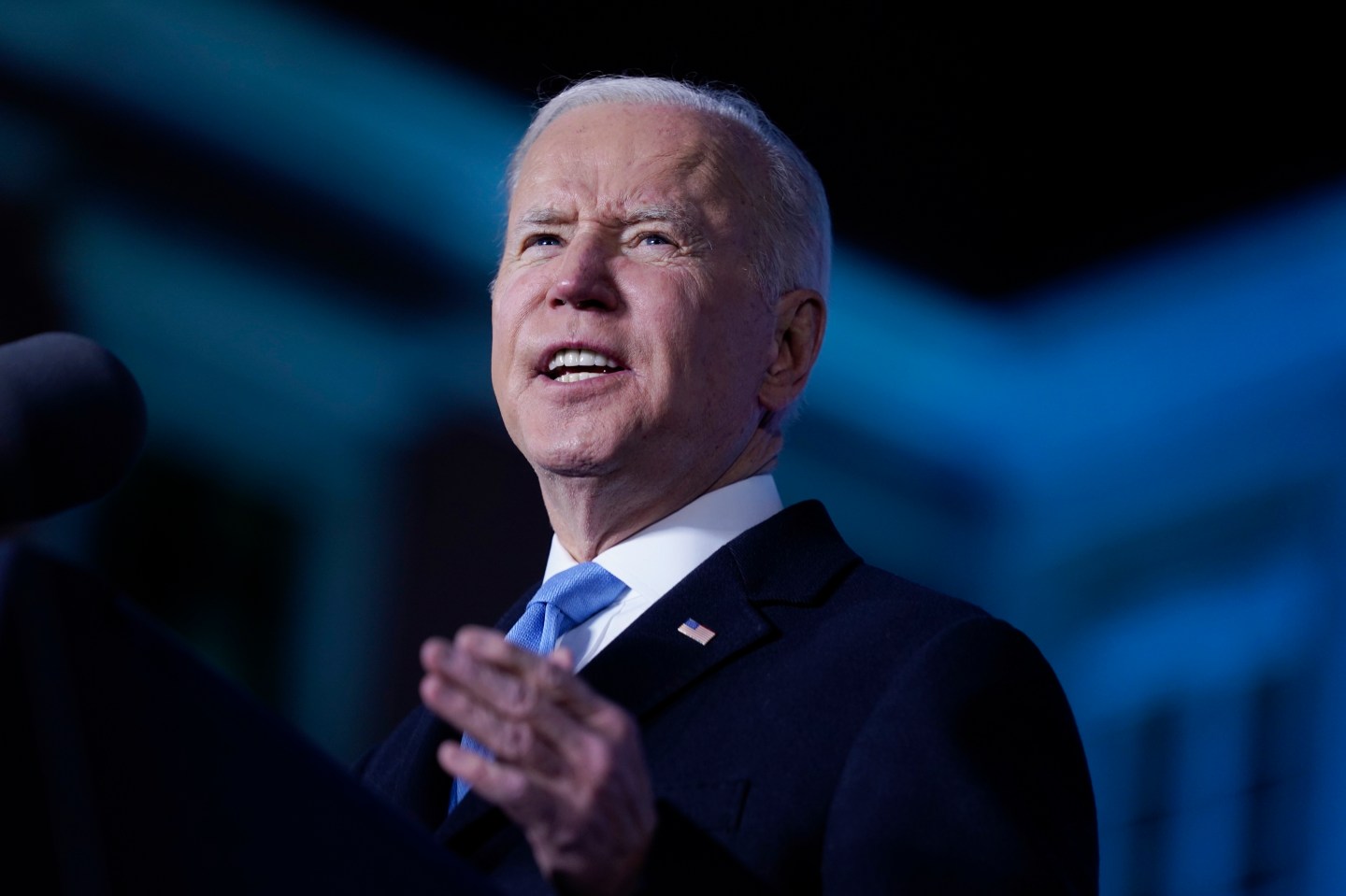 President Joe Biden delivers a speech about the Russian invasion of Ukraine, at the Royal Castle, Saturday, March 26 in Warsaw.
Evan Vucci—Associated Press

WASHINGTON—President Joe Biden intends to propose a minimum tax of 20% on households worth more than $100 million and cut projected budget deficits by more than $1 trillion over the next decade, according to a fact sheets released Saturday by the White House budget office.

The introduction of the minimum tax on the wealthiest Americans would represent a significant reorienting of the tax code. It would apply to the top 0.01% of households with half of the expected revenue coming from households worth $1 billion or more. The minimum tax would effectively prevent the wealthiest sliver of America from paying lower rates than families who think of themselves as middle class, while helping to generate revenues to fuel Biden’s domestic ambitions and keep the deficit in check relative to the U.S. economy.

In his proposal expected Monday, the lower deficits also reflect the economy’s resurgence as the United States emerges from the pandemic. It’s a sign that the government’s balance sheet will improve after a historic burst of spending to combat the coronavirus.

The fading of the pandemic and the growth has enabled the deficit to fall from $3.1 trillion in fiscal 2020 to $2.8 trillion last year and a projected $1.4 trillion this year. That deficit spending paid off in the form of the economy expanding at a 5.7% pace last year, the strongest growth since 1984. But inflation at a 40-year high also accompanied those robust gains as high prices have weighed on Biden’s popularity.

For the Biden administration, the proposal for the budget year that begins Oct. 1 shows that the burst of spending helped to fuel growth and put government finances in a more stable place for years to come as a result. One White House official, insisting on anonymity because the budget has yet to be released, said the proposal shows that Democrats can deliver on what Republicans have promised before without much success: faster growth and falling deficits.

Yet the Biden budget would pledge to do so through a kind of wealth tax that many Republicans say would hurt the economy by diminishing private investment in companies that create jobs and cause the wealthy to put their fortunes to work abroad.

Republican lawmakers have said that the Biden administration’s spending over the past year has led to greater economic pain in the form of higher prices. The inflation that came with reopening the U.S. economy as the closures from the pandemic began to end has been amplified by supply chain issues, low interest rates and, now, disruptions in the oil and natural gas markets because of Russia’s invasion of Ukraine.

Senate Republican leader Mitch McConnell of Kentucky pinned the blame solely on Biden’s coronavirus relief as well as his push to move away from fossil fuels.

“Washington Democrats’ response to these hardships has been as misguided as the war on American energy and runaway spending that helped create them,” McConnell said last week. “The Biden administration seems to be willing to try anything but walking back their own disastrous economic policies.”

Biden inherited from the Trump administration a budget deficit that was equal in size to 14.9% of the entire U.S. economy. But the deficit starting in the upcoming budget year will be below 5% of the economy, putting the country on a more sustainable path, according to people familiar with the budget proposal who insisted on anonymity to discuss forthcoming details.

The lower deficit totals will also be easier to manage even if interest rates rise.

The expected deficit decrease for fiscal 2022 reflects the solid recovery in hiring that occurred in large part because of Biden’s $1.9 trillion coronavirus relief package. The added jobs mean additional tax revenue, with the government likely collecting $300 billion more in revenues compared to fiscal 2021, a 10% increase.

Still, the country will face several uncertainties that could reshape Biden’s proposed budget, which will have figures that don’t include the spending omnibus recently signed into law. Biden and U.S. allies are also providing aid to Ukrainians who are fighting against Russian forces, a war that could possibly reshape spending priorities and the broader economic outlook.