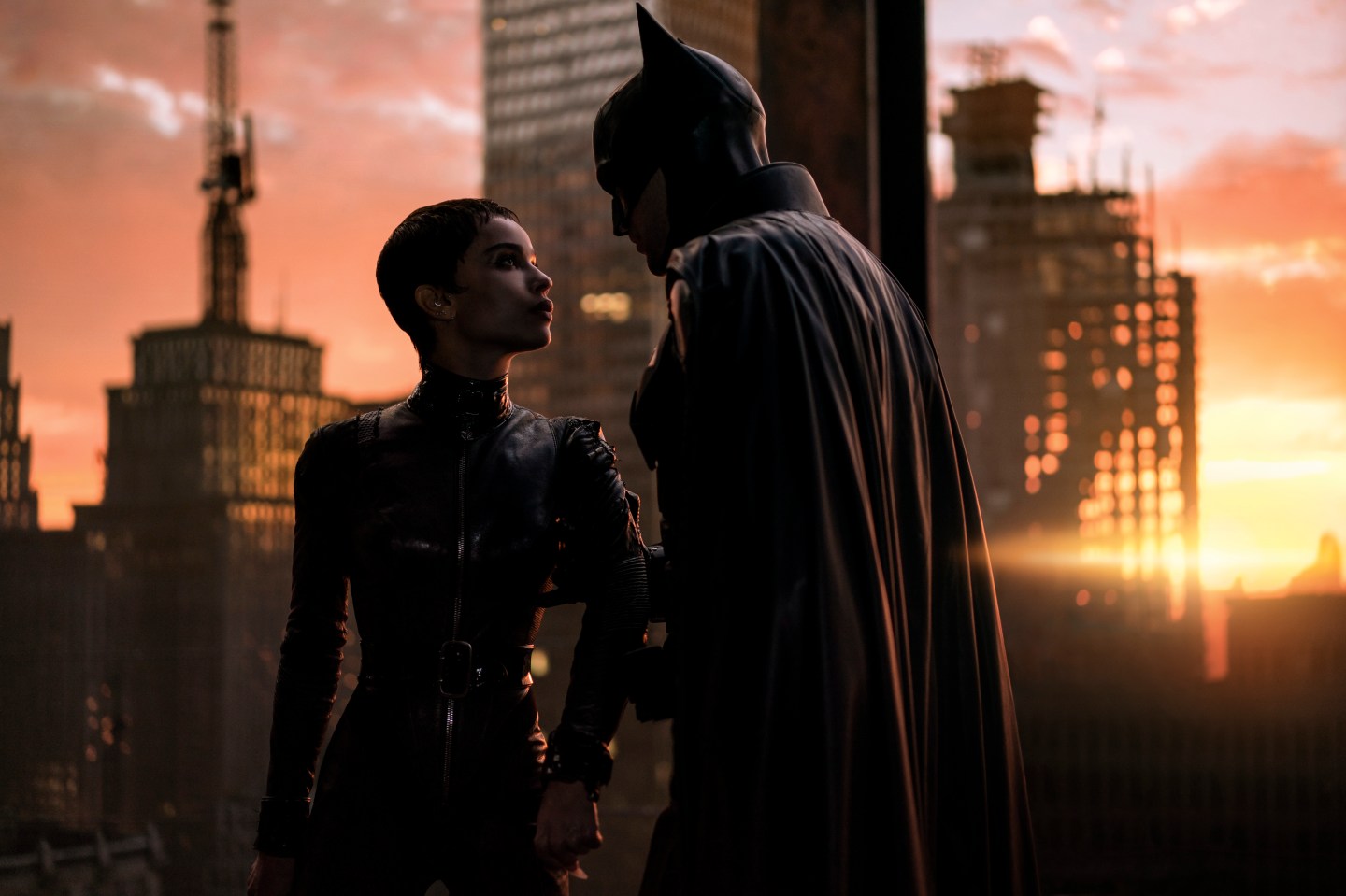 This image released by Warner Bros. Pictures shows Zoe Kravitz, left, and Robert Pattinson in a scene from "The Batman." “The Batman” is still going strong three weeks into its theatrical run, with a tight grip on the top spot at the box office. Robert Pattinson’s debut as the Dark Knight earned an additional $36.8 million over the weekend, according to studio estimates March 20. It also slid past the $300 million mark ahead of projections.
Jonathan Olley—Warner Bros. Pictures/AP

“The Batman” is still going strong three weeks into its theatrical run, with a tight grip on the top spot at the box office.

Robert Pattinson’s debut as the Dark Knight earned an additional $36.8 million over the weekend, according to studio estimates Sunday. It also slid past the $300 million mark ahead of projections.

The Warner Bros. film is the highest grossing movie of 2022 and the second highest since the beginning of the pandemic (first place goes to “Spider-Man: No Way Home”).

“The Batman,” directed by Matt Reeves, also picked up $49.1 million internationally this weekend, bringing its global total to $598.1 million. The only place “The Batman” seems to be stumbling is in China where it earned $12.1 million in its first weekend. But about 43% of cinemas in China are closed due to the pandemic and “The Batman” still did slightly better than “Unchartered” which also opened there this weekend to $10.3 million.

“The Batman” cost an estimated $200 million to make, not counting the many millions spent on marketing. But it is already a win for Warner Bros., which took at hit at the box office in 2021 because all of its films were released simultaneously in theaters and on HBO Max.

It also helps that marketplace competition has been slim. The biggest competitor this weekend was the anime “Jujutsu Kaisen 0,” which was released by Crunchyroll and Funimation, and took in an estimated $17.7 million in its first weekend in North America, where it was playing on 2,748 screens. The Japanese film is based on a best-selling manga and available to watch dubbed or with subtitles.

“Fans made this movie a big hit this weekend,” said Paul Dergarabedian, the senior media analyst for Comscore. “It shows how passionate fans of anime are and how beautiful these films are when presented on the big screen.”

The horror film “X” also debuted this weekend on 2,865 screens and is projected to gross around $4.4 million. Directed by Ti West and distributed by A24, “X” is about a group of people who are terrorized while shooting a pornographic film.

Focus Features launched the crime drama “The Outfit,” starring Mark Rylance in 1,324 locations. It made an estimated $1.5 million. And outside of the top 10, Vertical Entertainment and Roadside Attractions had “Alice,” the Sundance breakout about an enslaved woman who gets transported to 1973, which made $176,120 from 170 locations.