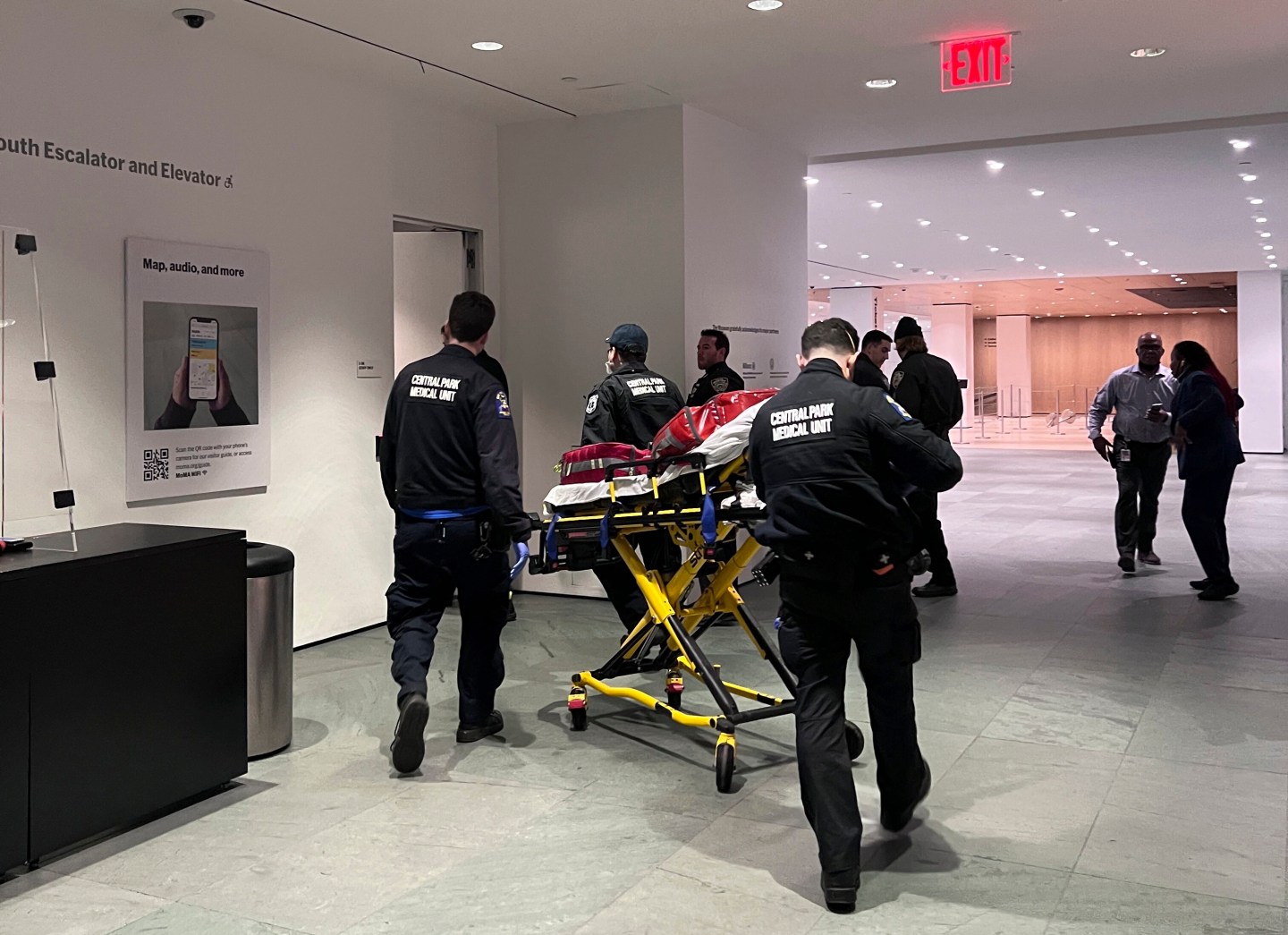 In this photo provided by Yuichi Shimada, medical personnel respond at the Museum of Modern Art in New York after a man stabbed two employees after he was denied entrance for previous incidents of disorderly conduct on March 12.
Yuichi Shimada—AP images

NEW YORK—Video from the Museum of Modern Art shows the moment a man leaped over a reception desk and stabbed two employees as they tried to flee Saturday.

The video released by New York City police shows a man police identified as 60-year-old Gary Cabana entering the museum lobby through a revolving door then climbing onto the desk and jumping over it as a man carrying what appears to be a walkie-talkie tries in vain to stop him.

Police were still searching for Cabana as of Sunday morning.

The man, wearing a black wool hat and a surgical mask, approaches three employees who are trapped in the small space and stabs one of them—a young woman who is able to run away seconds later—though not before she is stabbed again in the back.

The attacker then stabs the second employee as the man with the walkie-talkie hurls a notebook at him. That appears to distract the attacker long enough for the second victim to flee. The third employee can be seen getting up from the ground after the attacker runs away.

Authorities said Saturday that the two museum employees, a 24-year-old man and 24-year-old woman, were both stable with non-life-threatening injuries. Their names weren’t released.

A letter informing Cabana of his expired membership had been sent out Friday, but he came to the museum Saturday saying he intended to see a film there, according to police.

He then became upset and stabbed the museum employees in the back, collarbone and the back of neck, Miller said. They were rushed within minutes to the hospital.

Miller said Saturday that the video showed which way the suspect went after leaving the museum. Police shared photos of Cabana late Saturday night, asking for the public’s help finding him.

The department has no record of a previous arrest for the man.

The museum didn’t immediately respond to an emailed request for comment on the incident, but said on social media that it would be closed to the public Sunday.

The midtown Manhattan museum evacuated its patrons Saturday afternoon. Yuichi Shimada, a museumgoer present at the time of the attack, tweeted he was on the second floor when a couple suddenly came running toward him, and he heard security guards’ radios throughout the museum loudly announcing something at the same time.

“It was chaotic, partly because it was snowing, with a group of young women in a panic and crying,” Shimada said. “Not being good with claustrophobia myself, I headed for the exit early.”

Shimada was diverted to the side on his way out as a stretcher was hurriedly brought in. Police vehicles and ambulances, emergency lights flashing, thronged outside the museum as dozens of patrons hurried away.

Mayor Eric Adams tweeted Saturday evening he’d been briefed on the attack and said the victims’ injuries were not life-threatening.

“We’re grateful for the quick work of our first responders,” Adams, a former NYPD captain, said.

MoMA, founded in 1929, is one of New York City’s top tourist attractions, and drew more than 700,000 visitors in 2020. Its collection of modern art includes “The Starry Night” by Vincent Van Gogh and works by Henri Matisse and Paul Gauguin.