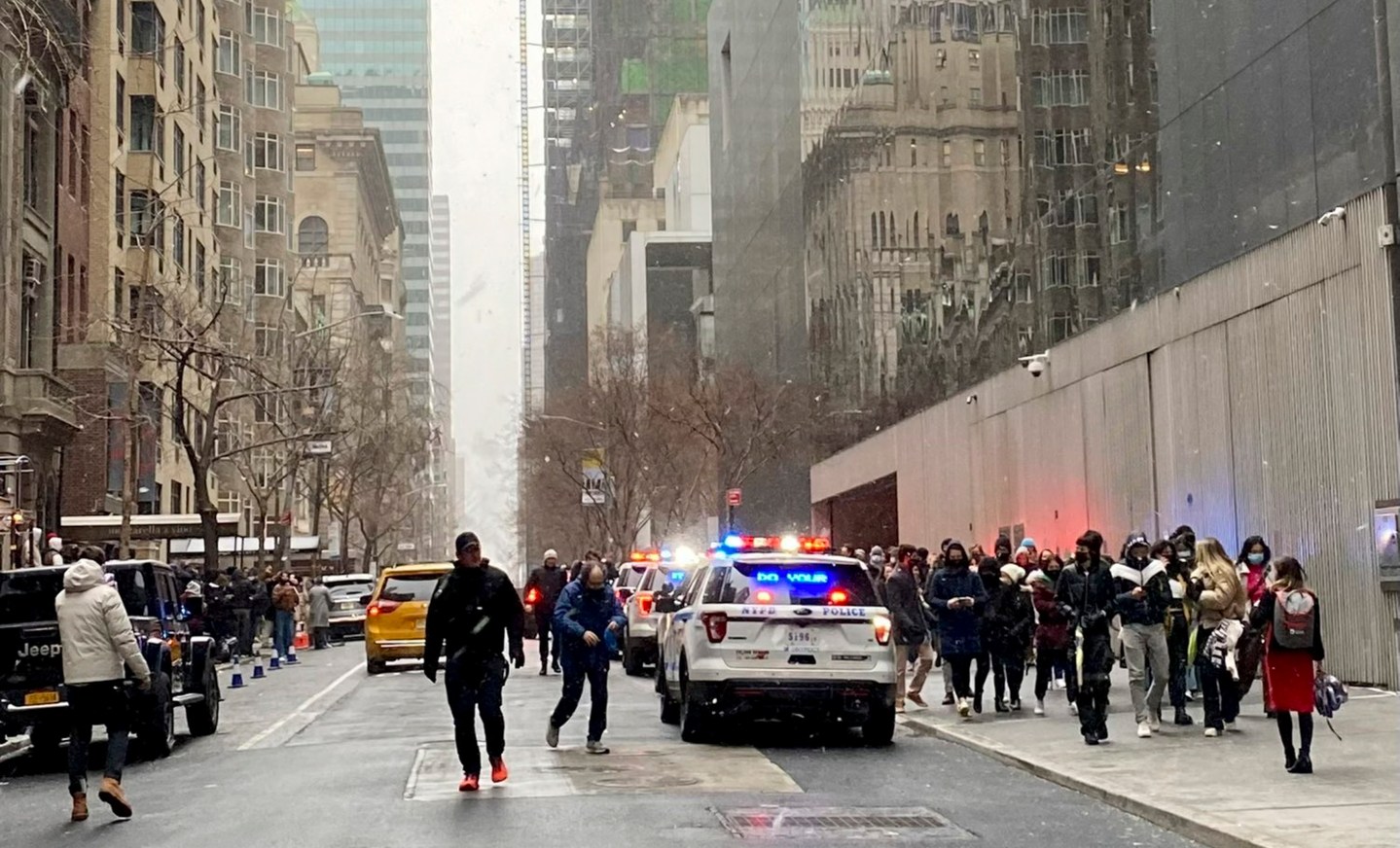 In this photo from a social media post by Scott Cowdrey, people are evacuated from the Museum of Modern Art where a stabbing occurred, Saturday, March 12 in New York. Police said two people were stabbed inside MoMA and in stable condition at Bellevue Hospital.
Scott Cowdrey via AP

NEW YORK—A man stabbed two employees inside the Museum of Modern Art in New York on Saturday afternoon, leaping over a reception desk to attack them after he was denied entrance for previous incidents of disorderly conduct, authorities said.

Police said the two employees were stabbed multiple times and both were in stable condition at Bellevue Hospital later Saturday. People said on social media that museumgoers ran for the exits in confusion and chaos after the stabbing.

NYPD Deputy Commissioner of Intelligence & Counterterrorism John Miller said the man’s membership was revoked for two separate incidents of disorderly behavior at the museum in recent days. He was being sought.

“He became upset about now being allowed entrance, and then jumped over the reception desk and proceeded to attack and stab two employees of the museum multiple times,” Miller said.

Miller said the employees were stabbed in the back, in the collar bone, in the back of neck and were rushed within minutes to Bellevue.

The deputy commissioner also said police trying to locate the man had access to video of him leaving the museum and were aware of the direction in which he left.

Miller did not identify the man by name but described him as a white male wearing a black jacket, blue surgical mask, a colorfully patterned shirt and hood. He said the man was a “regular” at the museum, and that the museum had adequate security.

The midtown Manhattan museum evacuated its patrons Saturday afternoon. Yuichi Shimada wrote on Twitter that he was looking at a painting on the second floor when a couple suddenly came running toward him. He said he then heard guards’ radios throughout the museum all loudly announcing something at the same time.

“Not being good with claustrophobia myself, I headed for the exit early, hoping to get out before each door was completely and urgently closed,” Shimada said.

He was diverted to the side on his way out as a stretcher was hurriedly brought inside. Police vehicles and ambulances, their emergency lights flashing, thronged the outside of the museum as dozens of patrons hurried away.

“It was chaotic, partly because it was snowing, with a group of young women in a panic and crying,” Shimada said.

Law enforcement officials are investigating the attack, and the names of the employees were not immmediately released.

Mayor Eric Adams tweeted Saturday evening that he had been briefed on the attack and said the injuries to the two victims were not life-threatening. “We’re grateful for the quick work of our first responders,” he added.

MoMA, founded in 1929, is one of New York City’s top tourist attractions, and drew more than 700,000 visitors in 2020. Its collection of modern art includes “The Starry Night” by Vincent Van Gogh and works by Henri Matisse and Paul Gaugin.