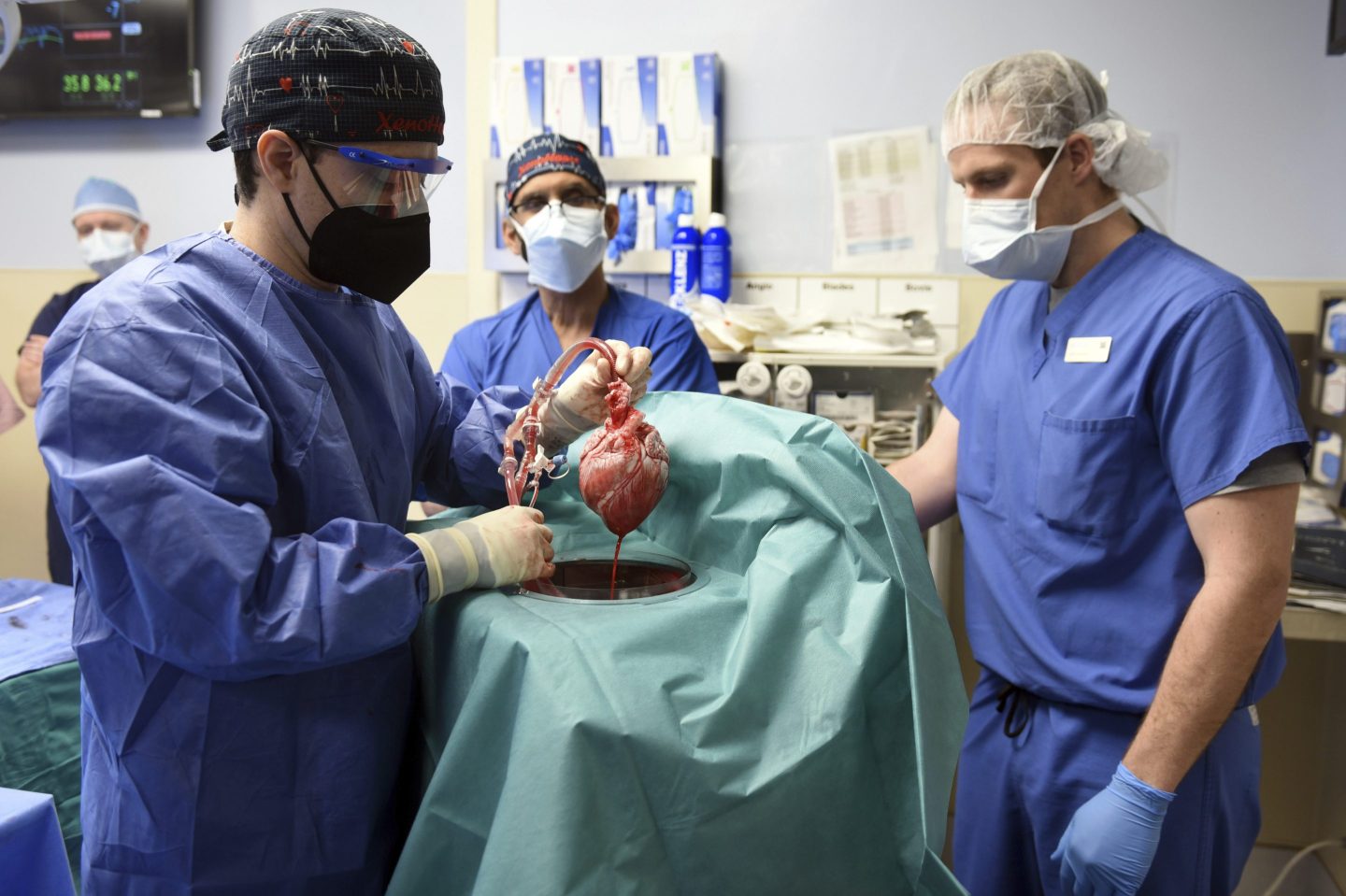 Members of the surgical team show the pig heart for transplant into patient David Bennett in Baltimore on Friday, Jan. 7, 2022.
Mark Teske—University of Maryland School of Medicine/AP

The first person to receive a heart transplant from a pig has died, two months after the groundbreaking experiment, the Maryland hospital that performed the surgery announced Wednesday.

David Bennett, 57, died Tuesday at the University of Maryland Medical Center. Doctors didn’t give an exact cause of death, saying only that his condition had begun deteriorating several days earlier.

Bennett’s son praised the hospital for offering the last-ditch experiment, saying the family hoped it would help further efforts to end the organ shortage.

“We are grateful for every innovative moment, every crazy dream, every sleepless night that went into this historic effort,” David Bennett Jr. said in a statement released by the University of Maryland School of Medicine. “We hope this story can be the beginning of hope and not the end.”

Doctors for decades have sought to one day use animal organs for life-saving transplants. Bennett, a handyman from Hagerstown, Maryland, was a candidate for this newest attempt only because he otherwise faced certain death—ineligible for a human heart transplant, bedridden and on life support, and out of other options.

After the Jan. 7 operation, Bennett’s son told The Associated Press his father knew there was no guarantee it would work.

Prior attempts at such transplants—or xenotransplantation—have failed largely because patients’ bodies rapidly rejected the animal organ. This time, the Maryland surgeons used a heart from a gene-edited pig: Scientists had modified the animal to remove pig genes that trigger the hyper-fast rejection and add human genes to help the body accept the organ.

At first the pig heart was functioning, and the Maryland hospital issued periodic updates that Bennett seemed to be slowly recovering. Last month, the hospital released video of him watching the Super Bowl from his hospital bed while working with his physical therapist.

Bennett survived significantly longer with the gene-edited pig heart than one of the last milestones in xenotransplantation—when Baby Fae, a dying California infant, lived 21 days with a baboon’s heart in 1984.

“We are devastated by the loss of Mr. Bennett. He proved to be a brave and noble patient who fought all the way to the end,” Dr. Bartley Griffith, who performed the surgery at the Baltimore hospital, said in a statement.

The need for another source of organs is huge. More than 41,000 transplants were performed in the U.S. last year, a record—including about 3,800 heart transplants. But more than 106,000 people remain on the national waiting list, thousands die every year before getting an organ and thousands more never even get added to the list, considered too much of a long shot.

The Food and Drug Administration had allowed the dramatic Maryland experiment under “compassionate use” rules for emergency situations. Bennett’s doctors said he had heart failure and an irregular heartbeat, plus a history of not complying with medical instructions. He was deemed ineligible for a human heart transplant that requires strict use of immune-suppressing medicines, or the remaining alternative, an implanted heart pump.

Doctors didn’t reveal the exact cause of Bennett’s death. Rejection, infection and other complications are risks for transplant recipients.

But from Bennett’s experience, “we have gained invaluable insights learning that the genetically modified pig heart can function well within the human body while the immune system is adequately suppressed,” said Dr. Muhammad Mohiuddin, scientific director of the Maryland university’s animal-to-human transplant program.

One next question is whether scientists have learned enough from Bennett’s experience and some other recent experiments with gene-edited pig organs to persuade the FDA to allow a clinical trial—possibly with an organ such as a kidney that isn’t immediately fatal if it fails.

Twice last fall, surgeons at New York University got permission from the families of deceased individuals to temporarily attach a gene-edited pig kidney to blood vessels outside the body and watch them work before ending life support. And surgeons at the University of Alabama at Birmingham went a step further, transplanting a pair of gene-edited pig kidneys into a brain-dead man in a step-by-step rehearsal for an operation they hope to try in living patients possibly later this year.

Pigs have long been used in human medicine, including pig skin grafts and implantation of pig heart valves. But transplanting entire organs is much more complex than using highly processed tissue. The gene-edited pigs used in these experiments were provided by Revivicor, a subsidiary of United Therapeutics, one of several biotech companies in the running to develop suitable pig organs for potential human transplant.