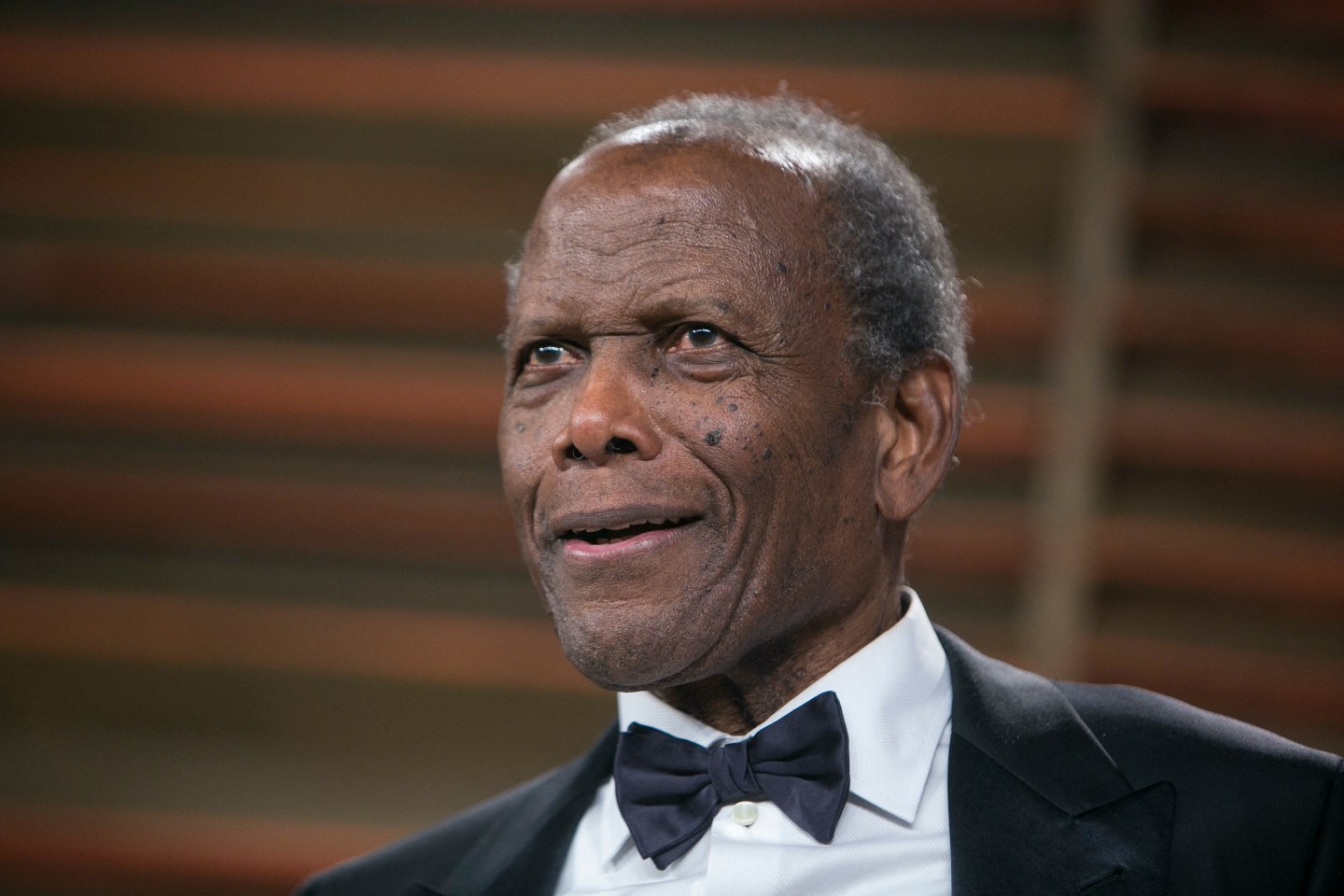 Sidney Poitier, the Academy Award-winning Black actor who experienced in life many of the racial stresses explored in his films, has died. He was 94.

NBC News reported his death, citing a source close to the family.

Poitier’s Oscar for best actor, as an itinerant handyman helping fix up an Arizona nunnery in Lilies of the Field (1963), made him a respected figure in Hollywood and beyond. James Earl Jones, Robert Townsend and Quincy Jones were among those who cited him as an inspiration. Poitier was the first African American entertainer to win the award for a leading role.

“Since you graced our screens more than 60 years ago, your talent and integrity have shattered barriers and inspired audiences everywhere,” actress Angelina Jolie said at the Academy Awards in March 2014, as she and Poitier presented the trophy for best director.

Poitier first gained wide acclaim shackled to Tony Curtis as a chain-gang escapee in The Defiant Ones (1958). Curtis insisted Poitier receive equal billing. Both were nominated for the best-actor Oscar, splitting the vote, and David Niven took the award for Separate Tables.

Guess Who’s Coming to Dinner (1967) featured Poitier and Katharine Houghton as an interracial couple trying to persuade their reluctant parents to bless their plans to wed. The film was nominated for the Academy Award for best picture, and Katharine Hepburn, playing Houghton’s mother, won the Oscar for best actress.

Two other films helped make 1967 an eventful year for Poitier. He played a teacher dealing with unruly students in the British production To Sir, With Love. As a Philadelphia detective on a Deep South murder case in In the Heat of the Night, he uttered the line, “They Call Me MISTER Tibbs,” which became the title of a sequel.

Stanley Kramer, who directed Poitier in The Defiant Ones and produced Guess Who’s Coming to Dinner, called Poitier “the only actor I ever worked with who has the range of Marlon Brando—from pathos to great power.”

Poitier’s career as an actor declined in the 1970s. Fewer roles came his way after a 1967 New York Times article asked, “Why Does White America Love Sidney Poitier So?” Using a racial epithet, Clifford Mason, an African-American playwright, accused Poitier of agreeing to be a token Black face Hollywood could exploit.

“He remains unreal, as he has for nearly two decades, playing essentially the same role, the antiseptic, one-dimensional hero,” Mason wrote.

The article was “the most devastating and unfair piece of journalism I had ever seen,” Poitier said in his 1980 autobiography, “This Life.”

He said the film industry was to blame “for the tokenism that my presence was.”

“Hollywood had not kept it secret that it wasn’t interested in supplying Blacks with a variety of positive images,” he said.

In 1995, the Kennedy Center in Washington honored Poitier as “the first Black to become a hero to both Black and White audiences” and for helping change “stubborn racial attitudes that had persisted in this country for centuries.”

The son of tomato farmers in the Bahamas, Poitier was born, prematurely, in Miami on Feb. 20, 1927. His parents, Reginald and Evelyn Poitier, had gone to Florida to sell tomatoes grown on their farm. Poitier returned to the Bahamas with his parents a few months later.

After Caribbean storms wiped out their crops, the family moved to Nassau about 10 years later. Poitier said it was the first time he saw cars or electricity and ate ice cream.

By his own account, in his teens he fell into petty crime and was arrested for theft. After a friend was sent to reform school for stealing a bicycle, Poitier’s parents shipped him at 15 to Miami to live with an older brother.

Coming from a Black, rural environment, Florida proved “a shock,” he said in a 2008 interview. “I was introduced to a system that had no room for me.”

“There was racism, there was a separation of people on the basis of color,” he said. “I found in my first few days there that I couldn’t go certain places.”

Following run-ins with White policemen, he took a job near Atlanta and in six weeks earned a bus fare to New York, where he worked as a dishwasher and lived in Harlem.

At 16, he lied about his age and enlisted in the Army. He was sent to a medical unit on Long Island, New York, and was discharged after a year as unfit for service.

He responded to an ad for actors in 1945 by the American Negro Theater. His audition was a disaster. The theater’s co-director, Frederick O’Neal, said he could neither read nor speak his lines and tossed him out, telling him to find work as a dishwasher.

Poitier got a radio and for months mimicked announcers and others he heard. He took a job in a restaurant—as a dishwasher—where he said an old Jewish waiter, seeing him struggle over a newspaper, helped him learn to read.

He returned for a second audition at the American Negro Theater and was accepted as an apprentice—after he offered to work as a janitor.

As understudy for Harry Belafonte, he was rehearsing a play on a day a Broadway director walked in. It gained Poitier a part on Broadway in an all-Black version of the classic Greek drama “Lysistrata.”

Poitier won good notices and joined a touring company of the all-Black version of “Anna Lucasta.” Then came a bleak period of no work, followed by two conflicting offers: one for a Broadway play, the other a movie contract paying seven times more money. His agent insisted he take the latter—a part as a doctor in No Way Out (1950).

Poitier said he became aware of the “pitiful” conditions confronting Black people in South Africa when he appeared in Cry, the Beloved Country (1951), which was filmed there. Among other things, he and fellow African-American actors were denied hotel rooms and had to find housing in a private home.

Then-President Barack Obama presents the Presidential Medal of Freedom to ambassador and actor Sidney Poitier during a ceremony in the East Room at the White House on August 12, 2009.
Jewel Samad—AFP via Getty Images

As a trade-off for co-starring in The Defiant Ones in 1958, Poitier agreed to play the lead in Porgy and Bess (1959) at movie mogul Samuel Goldwyn’s insistence.

Days after filming started on the George Gershwin musical, “I realized I was unusually interested” in co-star Diahann Carroll, he wrote later. “Halfway through the picture, we fell in love.”

When Poitier told his wife, the former Juanita Hardy, with whom he had four daughters, she became so distraught he didn’t seek a separation.

Poitier returned to the stage in 1959, starring in Lorraine Hansberry’s “A Raisin in the Sun,” a play about the dashed hopes of a Black family in Chicago. He earned a Tony nomination and played the role again in the 1961 movie.

He joined his friend Belafonte in the 1963 march on Washington to hear Martin Luther King Jr.’s “I Have a Dream” speech. The civil-rights leader called Poitier a “soul brother” for supporting him over the years.

Following his Oscar win, announced by Anne Bancroft during the Academy Awards on April 13, 1964, Poitier said he was so surprised that he “leaped six feet from my seat,” the New York Times reported.

Even in the immediate glow of his win, Poitier said he didn’t think his Oscar would “be a sort of magic wand that will wipe away the restrictions on job opportunities for Negro actors,” the Times said.

He was the second Black performer to win an Academy Award; Hattie McDaniel won an Oscar for best actress in a supporting role for her performance in Gone With the Wind, released in 1939.

He directed movies including Buck and the Preacher, in which he and Belafonte starred, and Stir Crazy, with Richard Pryor and Gene Wilder.

Poitier and his wife divorced in 1965, after his romance with Carroll had ended. In 1976, he married Joanna Shimkus, a former model and actress, with whom he had two daughters.