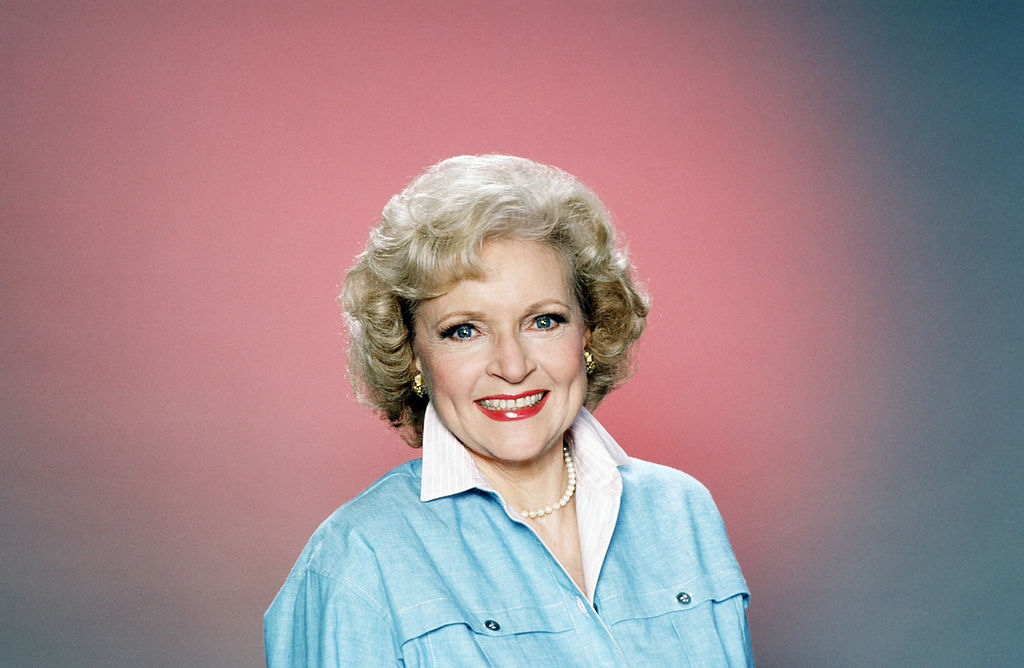 Betty White as Rose Nylund in a promotional photo for the first season of 'The Golden Girls.'
Herb Ball—NBCU Photo Bank/NBCUniversal/Getty Images

Betty White, whose saucy, up-for-anything charm made her a television mainstay for more than 60 years, whether as a man-crazy TV hostess on The Mary Tyler Moore Show or the loopy housemate on The Golden Girls, has died. She was 99.

She launched her TV career in daytime talk shows when the medium was still in its infancy and endured well into the age of cable and streaming. Her combination of sweetness and edginess gave life to a roster of quirky characters in shows from the sitcom Life With Elizabeth in the early 1950s to oddball Rose Nylund in The Golden Girls in the ’80s to Boston Legal, which ran from 2004 to 2008.

But it was in 2010 that White’s stardom erupted as never before.

In a Snickers commercial that premiered during that year’s Super Bowl telecast, she impersonated an energy-sapped dude getting tackled during a backlot football game.

“Mike, you’re playing like Betty White out there,” jeered one of his chums. White, flat on the ground and covered in mud, fired back, “That’s not what your girlfriend said!”

A month later, cable’s TV Land premiered Hot In Cleveland, the network’s first original scripted series, which starred Valerie Bertinelli, Jane Leeves, and Wendie Malick as three past-their-prime show-biz veterans who move to Cleveland to escape the youth obsession of Hollywood. They move into a home being looked after by an elderly Polish widow—a character, played by White, who was meant to appear only in the pilot episode.

But White stole the show, and the salty Elka Ostrovsky became a key part of the series, an immediate hit. She was voted the Entertainer of the Year by members of The Associated Press.

“It’s ridiculous,” White said of the honor. “They haven’t caught on to me, and I hope they never do.”

By then, White had not only become the hippest star around, but also a role model for how to grow old joyously.

“Don’t try to be young,” she told The AP. “Just open your mind. Stay interested in stuff. There are so many things I won’t live long enough to find out about, but I’m still curious about them.”

Such was her popularity that even White’s birthday became a national event: In January 2012, NBC aired Betty White’s 90th Birthday Party as a star-studded prime-time special. She would later appear in such series as Bones and Fireside Chat With Esther, and in 2019 gave voice to one of the toys, “Bitey White,” in Toy Story 4.

White remained youthful in part through her skill at playing bawdy or naughty while radiating niceness. The horror spoof Lake Placid and the comedy The Proposal were marked by her characters’ surprisingly salty language. And her character Catherine Piper killed a man with a skillet on Boston Legal.

But she almost wasn’t cast as “Happy Homemaker” Sue Ann Nivens in The Mary Tyler Moore Show in 1973. She and her husband, Allen Ludden, were close friends of Moore and Moore’s then-husband, producer Grant Tinker. It was feared that if White failed on the show, which already was a huge hit, it would be embarrassing for all four. But CBS casting head Ethel Winant declared White the logical choice. Originally planned as a one-shot appearance, the role of Sue Ann (which humorously foreshadowed Martha Stewart) lasted until Moore ended the series in 1977.

“While she’s icky-sweet on her cooking show, Sue is really a piranha type,” White once said. The role brought her two Emmys as supporting actress in a comedy series.

In 1985, White starred on NBC with Bea Arthur, Rue McClanahan, and Estelle Getty in The Golden Girls. Its cast of mature actresses, playing single women in Miami retirement, presented a gamble in a youth-conscious industry. But it proved a solid hit and lasted until 1992.

White played Rose, a gentle, dim widow who managed to misinterpret most situations. She drove her roommates crazy with off-the-wall tales of childhood in fictional St. Olaf, Minnesota, an off-kilter version of Lake Wobegon.

The role won her another Emmy, and she reprised it in a short-lived spinoff, The Golden Palace.

After her co-star Arthur died in 2009, White told Entertainment Tonight: “She showed me how to be very brave in playing comedy. I’ll miss that courage.”

White’s other TV series included Mama’s Family, as Vicki Lawrence’s irascible mother; Just Men, a game show in which women tried to predict answers to questions directed to male celebrities; and Ladies Man, as the catty mother of Alfred Molina.

Just Men brought her a daytime Emmy, while she won a fourth prime time Emmy in 1996 for a guest shot on The John Larroquette Show.

She also appeared in numerous miniseries and TV movies and made her film debut as a female U.S. senator in Otto Preminger’s 1962 Capitol Hill drama Advise and Consent.

White began her television career as $50-a-week sidekick to a local Los Angeles TV personality in 1949. She was hired for a local daytime show starring Al Jarvis, the best-known disc jockey in Los Angeles.

It was then she got a tip to start lying about her age.

“We are so age-conscious in this country,” she said in a 2011 interview with The Associated Press. “It’s silly, but that’s the way we are. So I was told, ‘Knock four years off right now. You’ll be blessing yourself down the road.’
“I was born in 1922. So I thought, ‘I must always remember that I was born in 1926.’ But then I would have to do the math. Finally, I decided to heck with it.”

White proved to be a natural for the new medium. She was bright, pretty, and likable, with a dimpled, eye-crinkling smile. A 1951 Los Angeles Times headline said: “Betty White Hailed as TV’s Busiest Gal.”

“I did that show five and a half hours a day, six days a week, for four and a half years,” she recalled in 1975. Jarvis was replaced by actor Eddie Albert, and when he went to Europe for the film Roman Holiday, she headed the show.

A sketch she had done with Jarvis turned into a syndicated series, Life With Elizabeth, which won her first Emmy. For a time she did interviews on The Betty White Show in the daytime, filmed the series at night and often turned up on a late-night talk show. She also appeared on commercials and every New Year’s narrated the Pasadena Rose Parade.

With the glib tongue and quick responses nurtured in the Jarvis years, she was a welcome guest on I’ve Got a Secret, To Tell the Truth, What’s My Line, and other game shows—all the way up to the 2008 Million Dollar Password, which revived the game once hosted by Ludden, whom she had met when a contestant on his original Password.

That was in 1961, and the next year, while touring in summer theater during television’s off season, she starred with Ludden—by then a widower with three children—in the comedy Critic’s Choice.

White, who had claimed to be “militantly single” since a 1947-1949 marriage, weakened in her resolve.

“I had always said on The Tonight Show and everywhere else that I would never get married again,” she told a reporter in 1963. “But Allen outnumbered me. He started in and even the children got in the act. And I surrendered—willingly.” The marriage lasted from 1963 until his death from cancer in 1981.

Off-screen, White tirelessly raised money for animal causes such as the Morris Animal Foundation and the Los Angeles Zoo. In 1970-1971, she wrote, produced and hosted a syndicated TV show, The Pet Set, to which celebrities brought their dogs and cats. She wrote a 1983 book titled Betty White’s Pet Love: How Pets Take Care of Us, and, in 2011, published Betty & Friends: My Life at the Zoo. Her devotion to pets was such that she declined a plum role in the hit 1997 movie As Good As It Gets. She objected to a scene in which Jack Nicholson drops a small dog down a laundry chute.

In her 2011 book If You Ask Me (And Of Course You Won’t), White explained the origins of her love for dogs. During the Depression, her dad made radios to sell to make extra money. But since few people had money to buy the radios, he willingly traded them for dogs, which, housed in kennels in the backyard, at times numbered as many as 15 and made White’s happy childhood even happier. Are there any critters she doesn’t like? “No,” White told the AP. “Anything with a leg on each corner.” Then what about snakes? “Ohhh, I LOVE snakes!”

She was born Betty Marion White in Oak Park, Illinois, and the family moved to Los Angeles when she was a toddler.

“I’m an only child, and I had a mother and dad who never drew a straight line: They just thought funny,” she told The Associated Press in 2015. “We’d sit around the breakfast table and then we’d start kicking it around. My dad was a salesman and he would come home with jokes. He’d say, ‘Sweetheart, you can take THAT one to school. But I wouldn’t take THIS one.’ We had such a wonderful time.”

Her early ambition was to be a writer, and she wrote her grammar school graduation play, giving herself the leading role.

At Beverly Hills High School, her ambition turned to acting, and she appeared in several school plays. Her parents hoped she’d go to college, but instead she took roles in a small theater and played bit parts in radio dramas.

Explaining in 2011 how she kept up her frantic pace even as an octogenarian, she explained that she only needed four hours of sleep each night.

And when asked how she had managed to be universally beloved during her decades-spanning career, she summed up with a dimpled smile: “I just make it my business to get along with people so I can have fun. It’s that simple.”