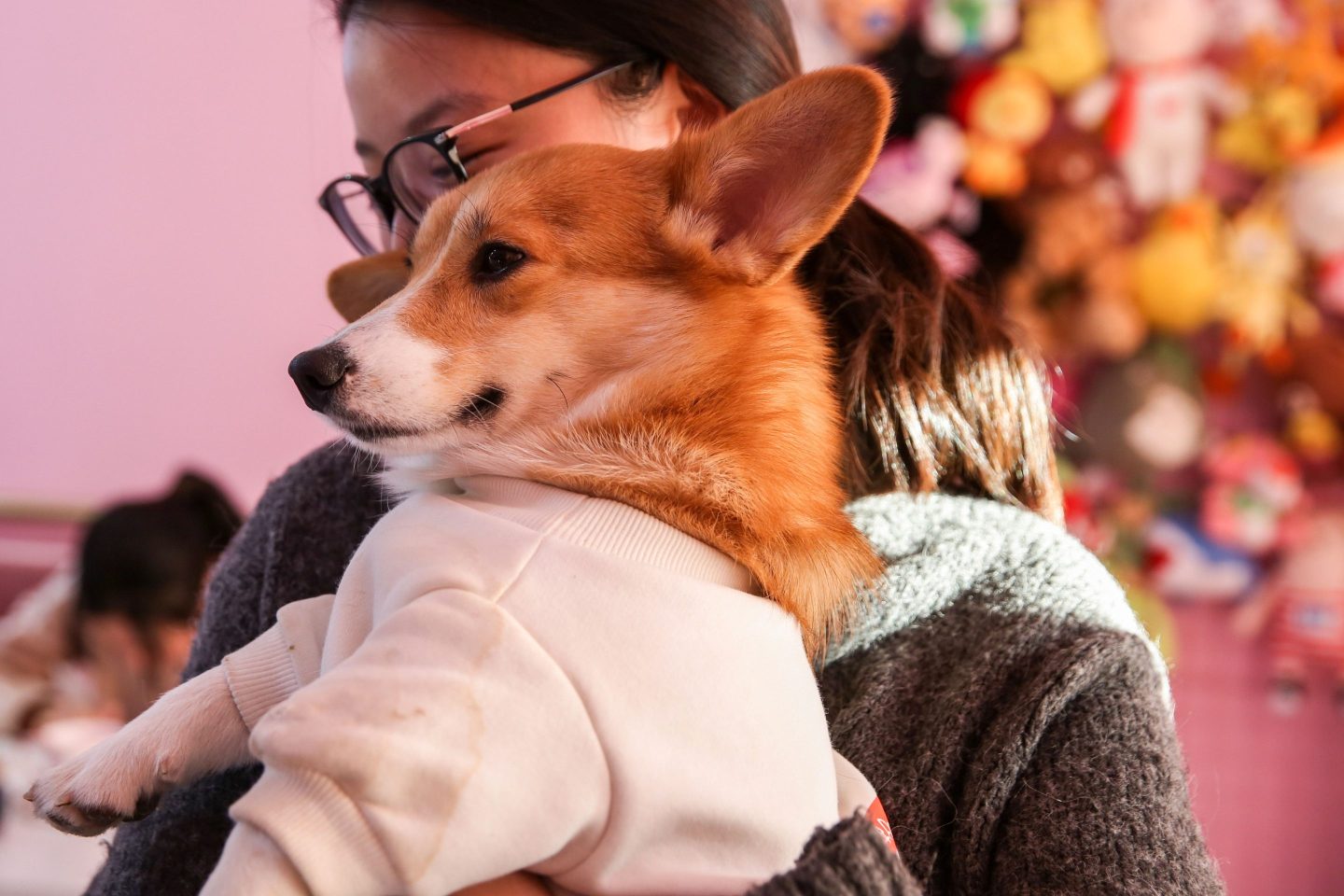 China's pet owners are concerned about going into isolation after a video of health workers beating a quarantined person's corgi went viral on Chinese social media.
STR—AFP via Getty Images

Video of the beating to death of a dog in China whose owner was in quarantine has shocked the nation and terrified pet owners over how far the government might go to realize its goal of zero COVID.

The corgi, Chaofen, was seen being clubbed by government workers in protective gear after its owner had contact with a COVID-19 patient and was sent into isolation. The video was captured by a camera in the owner’s home. The dog ran into another room after being struck on the head with a metal rod.

The owner, identified in news reports as Ms. Fu, said afterward that Chaofen had died, and that the pets of some of her neighbors suffered the same fate.

Authorities in Shangrao, in the eastern province of Jiangxi, said in a statement that workers disinfecting the area had given the animal a “non-hazardous treatment” without informing the owner, after the footage went viral on China’s Weibo social media platform.

That evasive language infuriated animal lovers, and instilled fear that government officials in some provinces are exterminating pets that could have the virus, as China takes aggressive steps to curb the highly-infectious delta variant that’s hurtling across the nation.

While some cities, such as Shanghai, allow owners to take their animals into quarantine, other places are adopting a harsher line. A woman in Chengdu said her cats were killed this month by officials after she was quarantined, according to the South China Morning Post.

“I’m so afraid now. I live in Chengdu and have two pets. My family loves them,” one user wrote on Weibo. “Now I don’t dare to leave my apartment any more, and my father doesn’t even bring his phone to grocery shopping, just in case we become close contacts.”

China, which is in the middle of its fourth outbreak in the past five months, has vowed to continue to combat the virus at every turn. It is now testing millions of people and sending thousands of those who might have come into contact with individuals who test positive into quarantine for weeks.

In September, a woman in Harbin who contracted the virus said her three cats were killed by the community workers she’d asked to care for them while she was in the hospital, after the animals tested positive for COVID-19, the Beijing News reported.

“Because there was no prior example of treating the cats, they want to euthanize the cats and wanted me to give them a written authorization. I did not agree,” she said, adding that had she wanted them to receive treatment.

Responding to that case, the Global Times, a Communist Party tabloid, wrote: “The majority of the Chinese people believe euthanizing the cats is a necessary decision in line with the law for the sake of epidemic prevention and control.”

Although the origin of the virus is thought to be from a wild animal, either directly from a bat or though an intermediate host like a civet cat or a raccoon dog, domesticated and zoo animals haven’t been implicated in the virus’s spread.

While animals can contract the coronavirus from humans there isn’t any clear evidence that transmission goes the other way. Most animals who have been studied have low viral loads, making it difficult to pass along the pathogen. Cases of humans getting infected after contact with a infected domestic animal are rare.

“It should be noted that these species are not easily infected under natural conditions, and there is no evidence that infected cats or dogs spread the virus to other animals or to people,” the American Veterinary Medical Association said in a March statement.

The first documented case of a pet with COVID-19 was a 17-year-old Pomeranian in Hong Kong, who was diagnosed after its owner contracted the virus in February 2020. Testing showed the dog, Loulou, was carrying low levels of the virus and ultimately produced antibodies to it.

Doctors concluded that Loulou, and a German shepherd in Hong Kong who was diagnosed the next month, both had such low levels of virus that they probably weren’t contagious.

Infections have since been confirmed in numerous other animals, including a Siberian tiger named Nadia at the Bronx Zoo in New York. While three African lions and three other Siberian tigers sharing the same enclosures also contracted the virus, none experienced respiratory distress or passed it on to their human handlers. All recovered.

Infected people can pass the virus on to their pets the same way they transmit it to other people, namely the droplets they spray when coughing, talking or even breathing. Direct hand-to-mouth transmission is also possible, French researchers found.

In China, many pets owners fear their animal companions might end up as the collateral damage as local officials stamp out anything they deem risky in allowing the virus to take root amid efforts to deliver on the government’s pursuit of COVID Zero.

Another Weibo user asked: “If this continues to swell are they going to eliminate all animals in a middle-risk city?” That was a reference to places with heightened risk of community transmission.