Social distancing for the 0.1%: Shipyards fill as superyachts grow even more massive during COVID-19 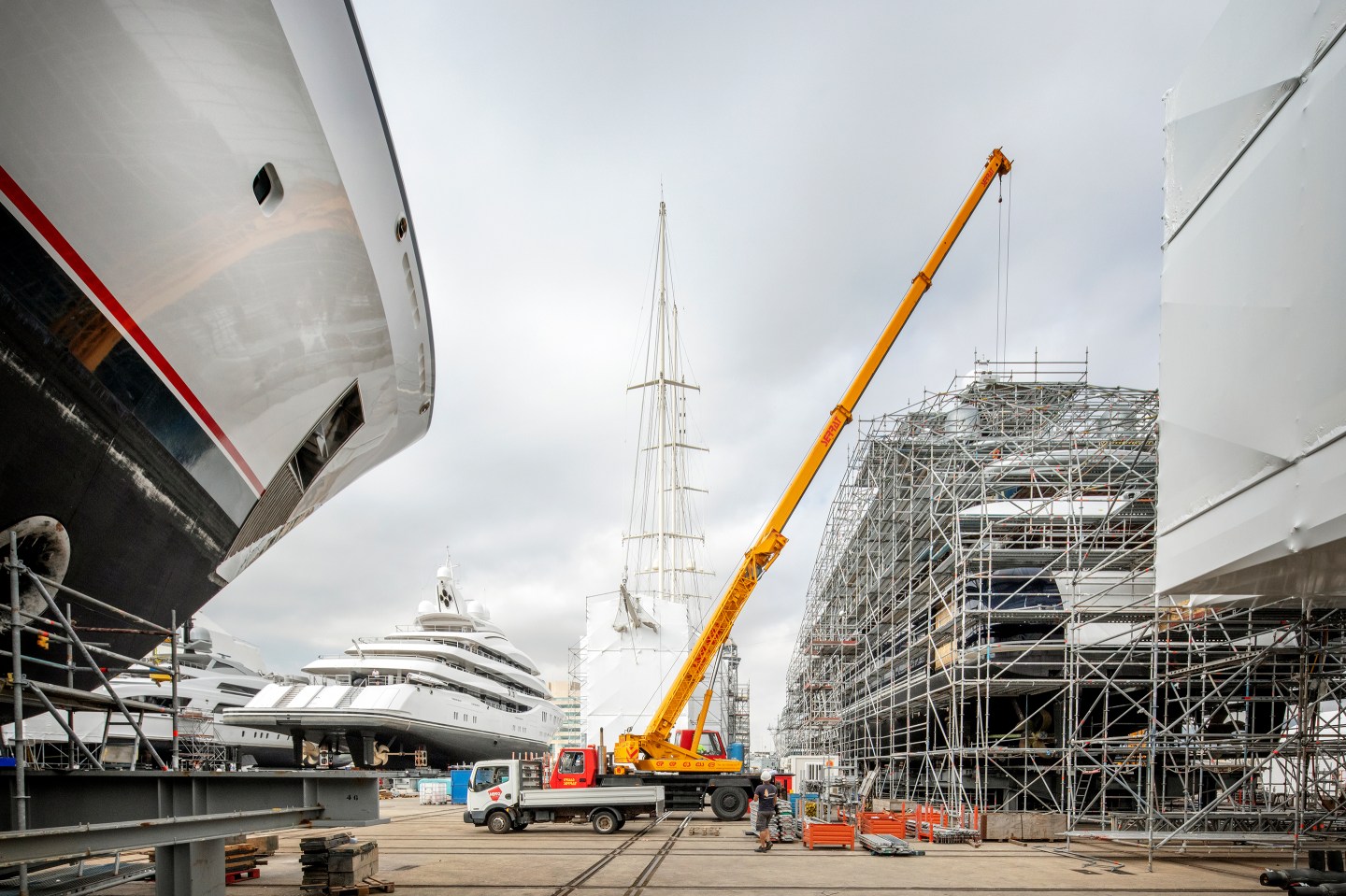 MB92’s shipyard in Barcelona where superyachts are stored for the winter to be refit, maintained, and repaired.
Photograph by Gunnar Knechtel for Fortune

Walking from Barcelona’s emblematic La Rambla boulevard toward Port Vell, 15 minutes away, the top of the yacht comes into view long before one enters the port. It is colossal, domineering, a study in the intersection of size and luxury. It’s the Eclipse, the largest of the four yachts owned by Roman Abramovich, the Russian magnate and boss of Chelsea Football Club. At 170 meters—almost 560 feet—the Eclipse is, at least for the time being, the world’s second-longest yacht after the 180-meter Azzam, owned by Khalifa bin Zayed Al Nahyan, the president of the United Arab Emirates.

Superyachts like the Eclipse are big business and getting bigger in every sense of the word. Not only are more of them under construction than at any time before, with order books full until 2027, but the boats are getting bigger too. The superyacht of 30 years ago is dwarfed by today’s leviathans, as the mega-wealthy demand ever more magnificent marine palaces.

Shadow boats used to carry the owner’s toys like Jet Skis are seen alongside a superyacht.
Photograph by Gunnar Knechtel for Fortune

“When I started in this business, a 40-meter boat was considered huge, and now it’s not even average,” said Pepe García-Aubert, CEO of MB92, a major superyacht refitter with shipyard facilities in Port Vell. “When we first designed the shipyard in 1994, we were thinking of boats of maybe 75 meters. We didn’t think anything over 75 meters would be considered. By 2004 we were thinking, maybe 125 meters would be the limit, but by 2010 we could see it could reach 200, and now there are already 185-meter boats under construction.”

This year a total of 185 superyachts are being built, mostly in northern Europe, compared to 148 in 2019, according to data from MB92.

Yachting had a banner year in summer 2021, when COVID spikes ruined an expected return to regular Mediterranean travel. Serving as a kind of social distancing for the very rich, some 228 yachts, averaging a length of 171 feet, were seen off Italy’s coast in August, 20 more than the previous year. Greece saw an even larger jump, up 60 yachts to 193.

Now it’s October, and the Barcelona shipyard is especially busy. The Mediterranean yachting season is over, and the owners need their boats in shape to spend the winter in the Caribbean.

The MB92 shipyard in Barcelona can work on around 25 yachts at a time and directly employs 170 people in the city.
Photograph by Gunnar Knechtel for Fortune

“The biggest challenge is preparing big projects with short notice and because everyone wants their boats ready at the same time,” said the yard’s commercial director Txema Rubio. “If you want to carry out a big extension you need a naval architect, but first you need a designer and you need the owner’s approval, and all of this affects timing.”

Rubio says they work closely with the crews, who stay with the boats during the refit—which take a minimum of three months, often six. Bigger yachts mean bigger projects, he says, with bigger crews and more companies to negotiate with. The shipyard itself accommodates around 650 crew members at any given time during the high season for refits.

“A yacht is like a city, it’s unique. We may have an agreed project, but the crew are the people who know how the boat works,” Rubio said.

“If you want to carry out a big extension you need a naval architect, but first you need a designer and you need the owner’s approval, and all of this affects timing,” said Txema Rubio, the commercial director of MB92’s shipyard.
Photograph by Gunnar Knechtel for Fortune

In addition to its Barcelona shipyard, MB92 also has a base in La Ciotat, close to Marseille. MB92 has been owned by alternative investment firm Squircle Capital since 2019.

On a tour of the shipyard, Rubio points out a boat that is rather less glamorous than the rest and explains that it’s what’s called a shadow boat, a boat that accompanies the yacht “to carry the owner’s toys.”

These toys are speedboats, Jet Skis, cars, helicopters, and even submarines that the owner doesn’t want cluttering up the yacht. So even as the yachts get bigger, there still isn’t enough storage space.

U.K.-based Towergate Insurance estimates that the annual running costs of a superyacht are equal to around 10% of the purchase price. On that basis, the $600 million Azzam would cost $60 million a year to crew, insure, and maintain.

A worker polishes a yacht railing in the metal workshop at the shipyard.
Photograph by Gunnar Knechtel for Fortune

Barcelona’s port, like the yachts in it, has come a long way in recent years. The old port was remodeled for the 1992 Olympic Games, and in 2010 it was ceded to the London-based Salamanca Group to be developed for superyachts. Since 2017, Qatari Investment bank QInvest and a fund with several international investors, including Lukoil CEO Vagit Alekperov, control the marina, whose concession expires in 2048.

Early next year the marina will undergo a €20 million redevelopment to provide 55 moorings. The entire area will also be landscaped. A mooring in Port Vell costs around €200 to €300 per square meter per annum.

“I believe that with this expansion we’ll become the biggest superyacht marina in the Mediterranean,” said Ignacio Erroz, director of Marina Port Vell. “Nearly all the moorings will be for boats of upwards of 50 meters. And we’re the only marina of this type that has a 400-meter quay that can accommodate any size of yacht.”

The MB92 shipyard (above) is adjacent to Marina Port Vell, which next year will undergo a €20 million redevelopment to provide 55 moorings for boats up to 50 meters.
Photograph by Gunnar Knechtel for Fortune

Naturally, not everyone in Barcelona is delighted that their historic port has become a place for the mega-rich to flaunt their wealth, less still now that the city has taken a big economic hit as a result of COVID. Itziar González, then the councillor for the district, criticized the decision to create a luxury marina, insisting that it was undemocratic and said the city should listen to residents who were opposed to the scheme.

However, both the marina and MB92 insist that the yachts bring benefits to the city.

A report commissioned by Marina Port Vell from PricewaterhouseCoopers says that the marina contributes €29.7m annually to the city’s GDP and directly employs more than 500 people.

“Also the people who are here—the crews—spend money here,” said García-Aubert. “A yacht is not only a luxury, it creates employment and brings money to the city.”

All about the Med

Although superyacht owners are more likely to hail from the United States, Russia, or the Middle East, the Mediterranean is the center of superyacht activity, with Italy the most popular destination, closely followed by France, Greece, and Spain.

And outside of the U.S., Italy, France, and Spain are far and away the most popular refit destinations.

The annual running costs of a superyacht are equal to around 10% of the purchase price, according to an estimate from U.K.-based Towergate Insurance.
Photograph by Gunnar Knechtel for Fortune

“The superyacht business is much more professional these days,” said García-Aubert. “Thirty years ago the industry was very amateurish. Sometimes the captain of the boat was a friend of the owner, and the chief steward was usually the captain’s wife, and sometimes a friend of the captain owned the shipyard. This has all changed.”

Business is booming, boosted by the convergence between the cruise ship and superyacht sectors, with a growing trend for small, exclusive cruise ships that accommodate around 50 passengers, similar in scale to a superyacht.

“The market is growing dramatically and this year even more so in spite of COVID and financial crises,” said García-Aubert. “In the past, rich people built mansions all over the world. Of course, they still have mansions, but a yacht is a moveable mansion. You can take it anywhere.”