Nuclear plants insulate France from the energy crisis. Now Macron is doubling down on them in a $35 billion moonshot plan 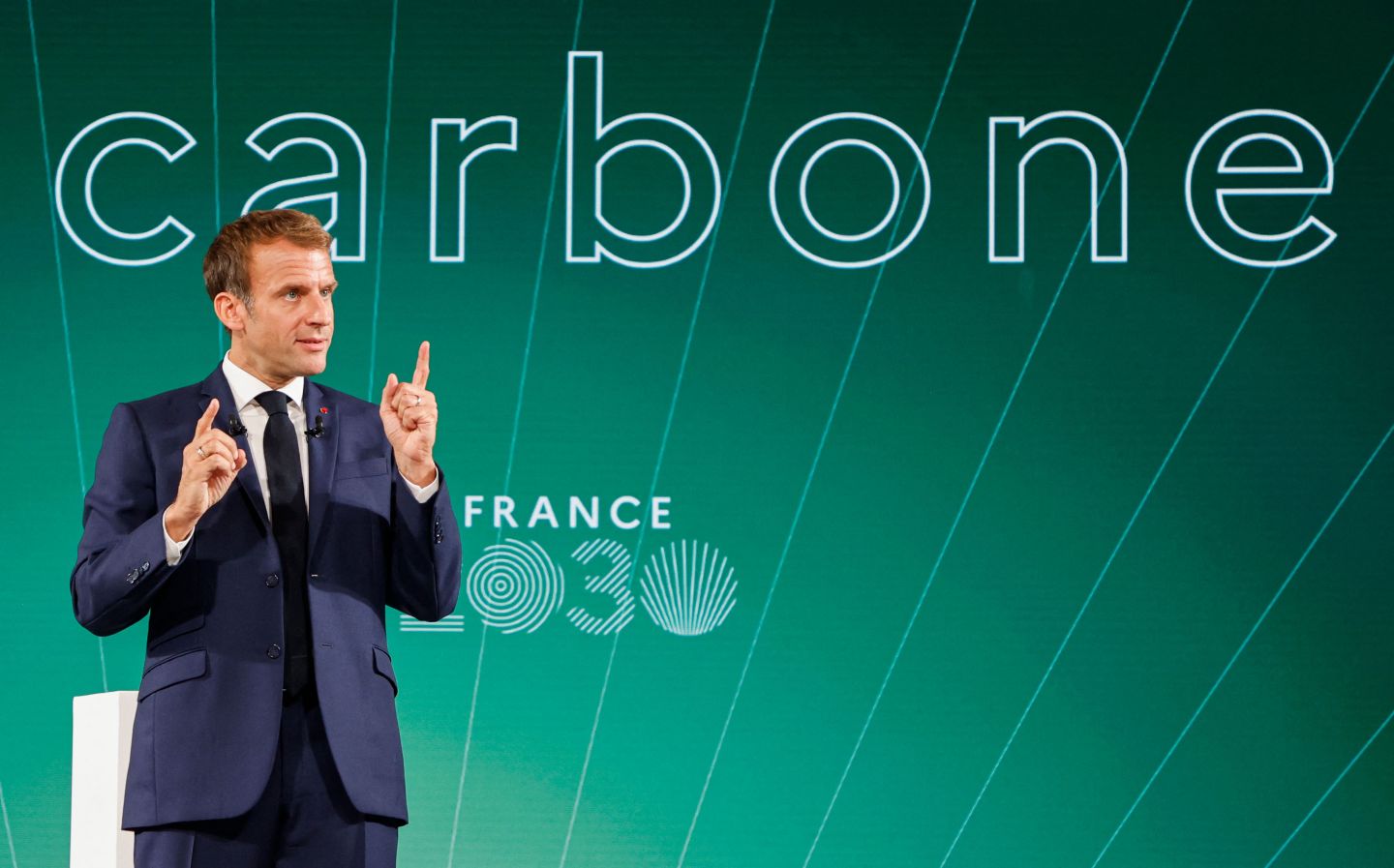 France’s President Emmanuel Macron speaks during the presentation of the France 2030 investment plan at the Élysée Presidential Palace in Paris on Oct. 12, 2021.
Ludovic Marin—Pool/AFP/Getty Images

Six months before Emmanuel Macron faces a tough election for a second five-year term as president, the French leader unveiled a €30 billion ($35 billion) investment to ramp up tech innovation and heavy industry—in a clear attempt to win over his conservative skeptics and to position France as a major player in the global economy.

Calling it a “battle for independence and the best quality of life,” he said billions would go to creating Europe’s first low-carbon airplane, opening green-hydrogen factories, and producing French-built semiconductors and millions of electric vehicles—all by 2030. Without speed, he said, “we have already lost.”

That puts Macron in good company among European Union leaders, who have approved a giant €750 billion spending package to kick-start green industries.

But in one key decision, Macron stands alone in Europe: He doubled down on nuclear power.

Macron said France would invest €1 billion in creating new-generation mini modular reactors, known as SMRs, which are cheaper to build than conventional nuclear plants and regarded as safer than the 58 reactors France already has in place.

“To produce energy, especially electricity, we are in luck,” Macron said in his televised speech, standing under ornate chandeliers in the Elysée Palace, surrounded by French business leaders and cabinet ministers. “The country’s nuclear power installation is already in place.”

Indeed—unique in the world—the French get about 70% of their electricity from nuclear power. Only the U.S. produces more nuclear power, but it has five times the population; China produces about the same amount as France, but for 20 times the number of people.

What’s more, it has put Macron at odds with his closest EU partner, outgoing German Chancellor Angela Merkel, who opted to end nuclear power after Japan’s Fukushima nuclear disaster in 2011.

Now, however, Macron’s decision to stick with nuclear power looks smart to many—and it is perfectly timed. Europe is entering the bitter winter months with rocketing energy costs and shortages of natural gas; natural-gas prices have risen 400% this year. German factories have reported huge production-cost increases, and on Monday the U.K. steel industry warned that spikes in electricity prices could force some British plants to temporarily shut down. By contrast, France’s nuclear power has insulated the country of 66 million from the energy shocks being felt across the continent.

“It is stupid to get out of nuclear when you have an installed base,” says André Loesekrug-Pietri, a former venture capitalist who heads the Joint European Disruptive Initiative, or JEDI, a Paris-based organization that funds moonshot projects in 29 countries. “The emissions go up, the shortages go up, and the costs of dismantling reactors is crazy,” he told Fortune after Macron’s speech.

Germany’s decision to cut nuclear power sent the country’s carbon emissions soaring, according to energy experts—while France kept its emissions in check. “Among all the advanced economies, France has the lowest carbon emissions, thanks to the nuclear power industry,” International Energy Agency executive director Fatih Birol told the Financial Times in a recent interview. “One kilowatt of energy you produce in France is six times less carbon intensive than the equivalent in Germany.”

But Macron is also eyeing the prospect of a big new export: SMR nuclear reactors. He said the country would aim to begin marketing the mini reactors to countries looking for new low-carbon energy sources, as they try to meet their net-zero climate targets. “We started developing SMRs later than the United States,” Renaud Crassous, who heads mobile nuclear reactor development for the French energy giant EDF, told the conservative Le Figaro newspaper on Tuesday. “But we are not late, since we hope to launch marketing from 2030.”

After years pushing for more focus on tech innovation, Loesekrug-Pietri says that while Macron’s promises on Tuesday were welcome, implementing them could be difficult—especially given the ponderous, labyrinthine bureaucracy in Europe.

“Europe’s put €200 billion into innovation since 1984, but I have trouble seeing any area where we are the leaders,” he says. “Money is plentiful. The question is, how to put speed and real risk-taking into the system.”