Balenciaga’s $1,200 sagging pants are being decried as racist 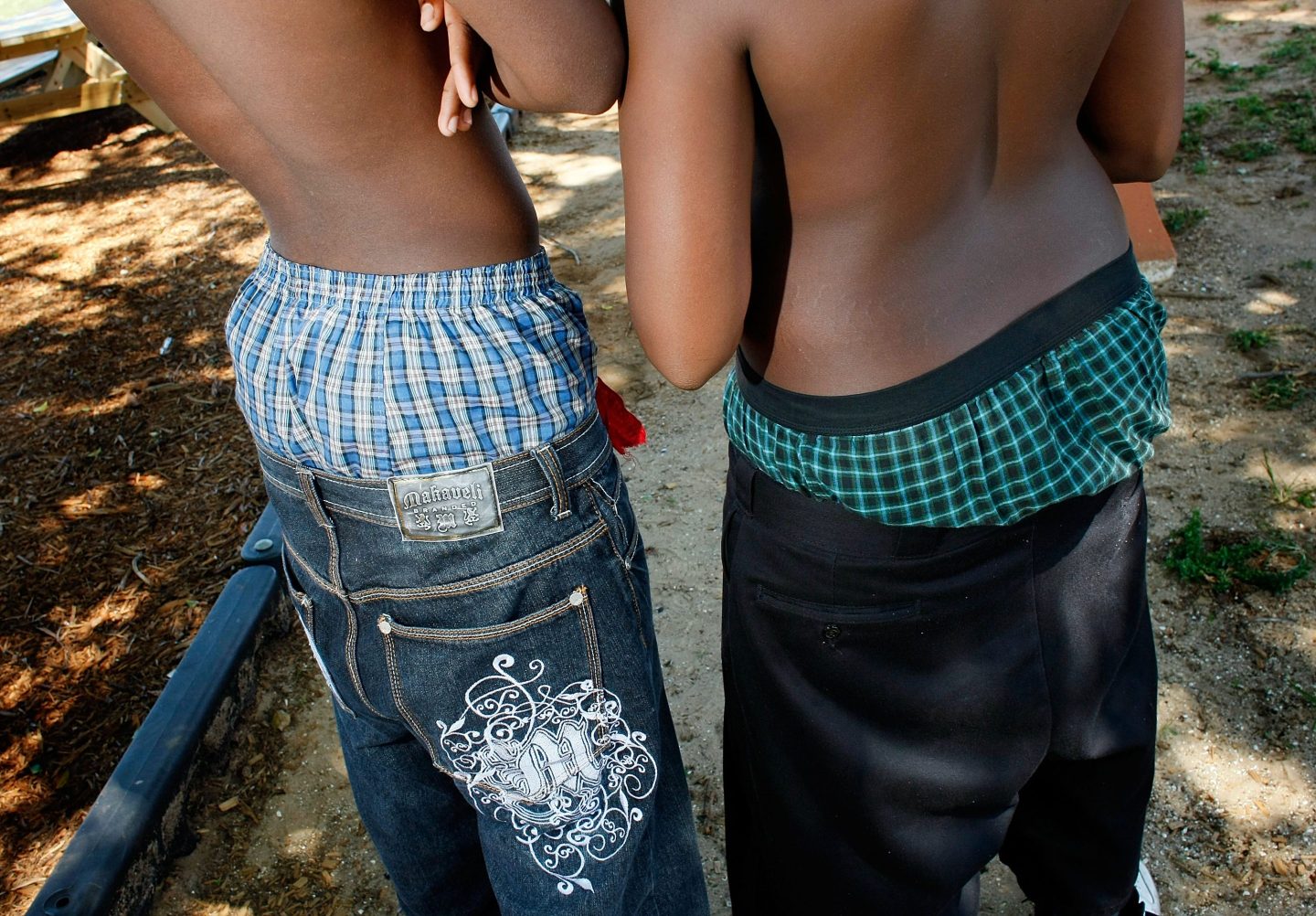 Two youths wear their pants with the underwear showing on April 23, 2009, in Riviera Beach, Fla. Palm Beach Circuit Judge Paul Moyle ruled a Riviera Beach city law banning sagging pants is unconstitutional in the case of a 17-year-old who was arrested and held overnight in jail for breaking the law.
Joe Raedle—Getty Images

Balenciaga is trying to sell sagging sweatpants with fake boxer briefs sewn into the waistline for $1,190.

The trousers—described as “trompe l’oeil,” a French expression for an optical illusion in art—look strikingly similar to trousers that are sagging, a style popularized by Black youth culture of wearing pants below the waistline, or even lower, to expose one’s boxers.

The high-fashion brand peddling the trousers—owned by French luxury giant Kering—is being accused of cultural appropriation, with online critics accusing the brand of being “tremendously racist” and “gentrifying sagging,” making it the latest publicly listed fashion house to be accused of racial insensitivity.

The history of sagging

Sagging has murky origins, with some claiming it comes from the U.S. prison system, where belts aren’t allowed, while others say it was born out of improvisation, since kids couldn’t afford tailors. It is generally accepted that the style was popularized in the early 1990s by hip-hop artists.

In the years since the style’s popularization, counties like Ocala, Fla., Wildwood, N.J., and Shreveport, La., have prohibited sagging—which has led to discriminatory practices.

In one extreme example, when Shreveport had a “saggy pants ban” in place, Anthony Childs, a 31-year-old Black man, fled from a police officer who was trying to detain him for wearing his pants too low. The officer fired several rounds at Childs, who died during the confrontation. The death was later ruled a suicide.

At the time, Black men made up 96% of the arrests under the ordinance in Shreveport, the ACLU reported, with ACLU of Louisiana legal director Katie Schwartzmann saying, “There is no legitimate need for this ordinance beyond racially motivated animus.” The law was later repealed.

This is not the first blunder from luxury industry, nor is it even the only one in this Balenciaga season.

As part of its newest collection, Balenciaga also put out a new bag, priced at $2,090, that has been called out for resembling a commonplace item in many African immigrant homes in the U.K.

Other luxury brands that have been in trouble include Gucci, also owned by Kering. It faced social media wrath after releasing Sikh turbans priced at $790 each, just months after it had to apologize for a turtleneck sweater featuring an exaggerated red mouth cutout that resembled blackface caricatures.

Prada pulled its $550 monkey figurine after social media users in the U.S. called out a strong resemblance to racist caricatures historically used to dehumanize Black people. Marc Jacobs had the Hadid sisters walk the runway in wigs of dreadlocks, sparking an uproar because of its spiritual significance in Rastafarianism.

Christian Dior pulled its Native American–themed Sauvage campaign due to online backlash. And Isabel Marant got a letter from Mexican Cultural Minister Alejandra Frausto Guerrero accusing her of using traditional design motifs from the cultural heritage of native Mexicans without permission and profiting from their work.

The high-fashion industry has recently made public steps toward diversity, but not without controversy. In 2019, Gucci and Prada made headlines for announcing they would launch ambitious diversity initiatives after insensitive product releases, but it was later revealed that Prada’s efforts to address the issues stemmed in part from negotiations with the New York City Commission on Human Rights.

In March 2021, a New York Times report found that among the top designers and creative directors in the fashion world, only four are Black.

Kering did not respond to a request for comment.