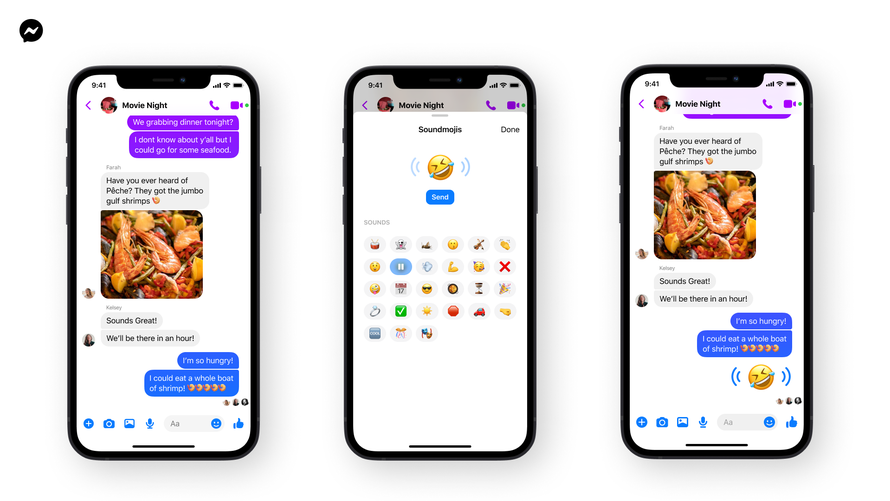 The company has announced a new feature for its popular Messenger service: Soundmojis, aka emojis with sound.

We really only have ourselves as a society to blame.

The initial batch of soundmoji, which are being released in the walkup to World Emoji Day (July 17), will include sounds such as a laugh track, clapping, crickets, drumrolls and evil laughter. You’ll also be able to include sound clips from Brooklyn Nine-Nine, Bridgerton and (bafflingly) “Friday” singer Rebecca Black.

Soundmoji are, for now at least, solely limited to the Facebook biosphere. You’re only able to use them in Messenger, not your phone’s default text messaging service. To access them, start a chat in Messenger then tap the smiley face and select the loudspeaker icon.

You’ll be able to preview sounds before you send them.

The potential annoyance factor for these is, of course, off the charts. It’s one thing to spam someone with emoji. (Every day, the company says, people send more than 2.4 billion messages with emoji.) It’s another entirely to audibly blow up their phone. Facebook didn’t offer any information on whether recipients would be able to opt out of soundmoji (short of muting their phone).

The Facebook announcement could take center stage during this year’s World Emoji Day, since no new emoji are expected to be introduced. The Unicode Consortium announced last year that COVID-19 forced them to delay the new rollout, which would have included a smiley face wearing Groucho glasses, parents bottle-feeding a baby, cockroaches, blueberries, and a woolly mammoth.