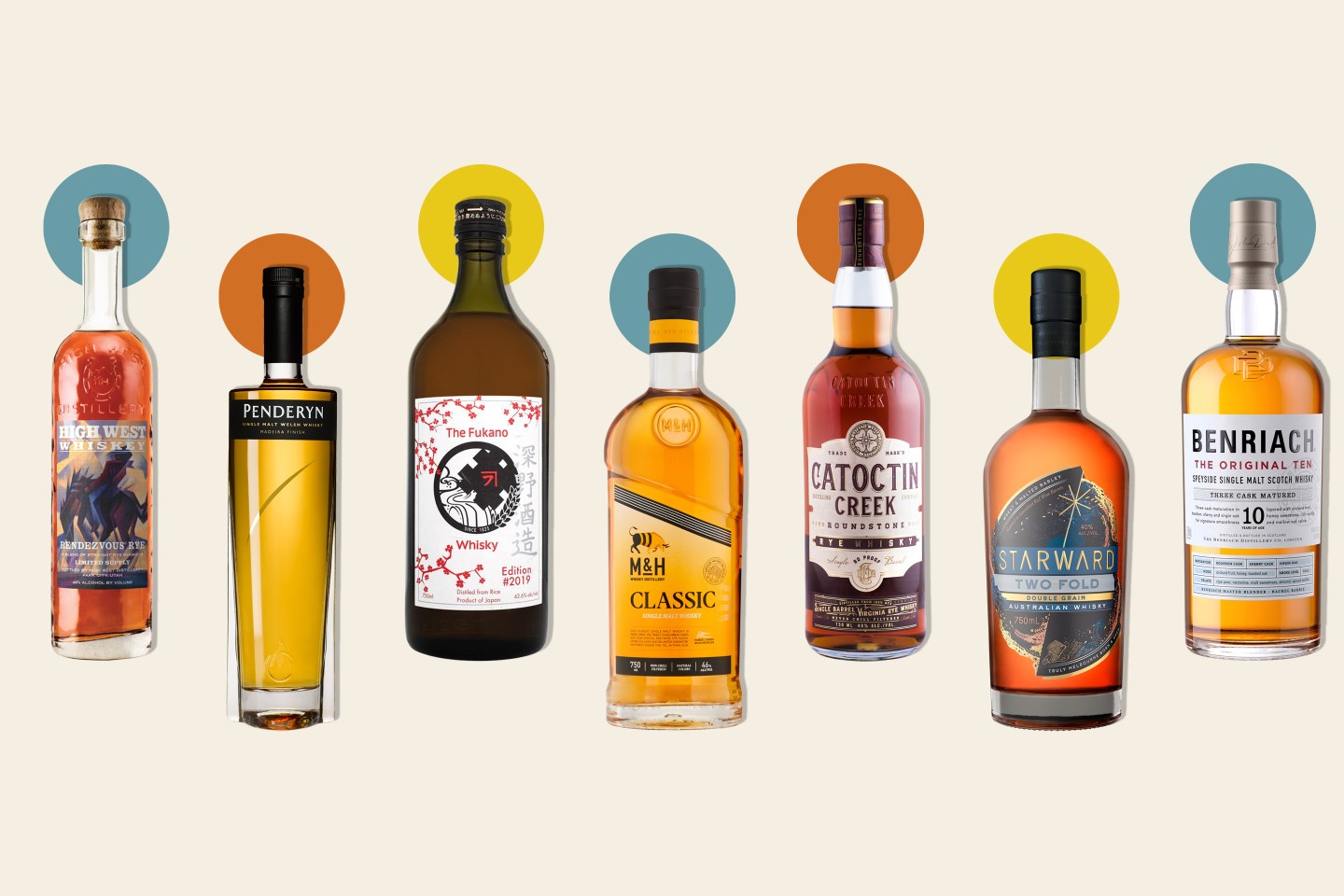 Whiskey is often thought of as a winter drink, for warming up cold nights while seated by the fireplace. But some are actually perfect for drinking all summer.
Courtesy of High West, Penderyn, Fukano, M&H Distillery, Catoctin Creek, Starward, Benriach

A couple of years ago, Penderyn Distillery set up a booth at the Scottish Highland Gathering and Games, taking place Labor Day weekend each summer near San Francisco. The Wales-based distillery—the country’s first in over a century—found itself among much bigger whiskey brands with more name recognition, and outsold them all. As one drinker sipped Penderyn on that warm California day, he remarked that it was a “sunshine whiskey.”

“The name stuck,” says Bethan Morgans, Penderyn’s commissioning distiller. “It’s such a lovely way to describe our whiskey. And I think it just explains exactly what it is—something very light and delicate, that can be enjoyed in the sunshine.”

Whiskey is often thought of as a winter drink, for warming up cold nights while seated by the fireplace. And though some are best for chilly weather, many are lighter-bodied, smooth, and refreshing and actually perfect for drinking all summer.

Below, find seven of the best bottles to mix into cocktails, or drink neat—as long as the sun is shining.

Penderyn “House Style” Madeira Finish: The distinction of being the first distillery to open in Wales in over a century gives Penderyn, based in the village of Penderyn in South Wales, a certain liberty to forge its own path. And it has. The all-female team of distillers—Laura Davies, Aista Jukneviciute, and Bethan Morgans—use a unique Faraday still for many of their expressions, including the “house style” Madeira finish.

While most single malt whiskey is distilled twice in pot stills, the Faraday method enables the spirit to be distilled only once; the design’s perforated copper plates help remove sulfites and other impurities, producing a spirit that clocks in at 92% ABV (alcohol by volume). And even at this high ABV, the Madeira finish—aged in two types of casks, first matured in ex–bourbon barrels and finished in ex–Madeira wine casks—is smooth and lighter-bodied, with hints of vanilla and a crisp, fresh finish.

Morgans recommends trying the whiskey alone to get an appreciation for it first. “Even if you choose to add something to it, whether it be water, ice, or a mixer, I always recommend trying it neat first,” she says. “Due to the distillation process, it’s very light and easy to drink.” Suggested retail price: $70

“Our M&H Classic is a whiskey that was matured under the Tel Aviv sunshine, a five minutes walk from the beach,” says Tal Chotiner, the distillery’s VP of international sales. “It is a whiskey for everyone, with light-bodied, light vanilla notes, a fresh spicy scent, and balanced sweetness.

These light and balanced characteristics make it a sunshine whiskey, best drunk neat or with one ice cube if it is boiling outside.”

Another summery way to drink it? In a Mediterranean julep: That’s two ounces of M&H Classic Single Malt poured over one-quarter ounce of simple syrup muddled with mint leaves; finish with a squeeze of fresh lime juice and a dash of bitters. SRP: $55

Catoctin Creek Roundstone Rye: Catoctin Creek chief distiller Becky Harris made history in Loudoun County, Va., as its first female whiskey maker in nearly a century. In 2009 she and husband Scott Harris founded the county’s first legal post-Prohibition distillery, where they make, among other spirits, Roundstone Rye. The state’s most awarded whiskey, Roundstone is crafted with 100% rye and aged for a little under two years in new Minnesota white oak casks.

“Many people feel that whiskey is only a fall or wintertime beverage, but at Catoctin Creek, we beg to differ,” says Scott, cofounder and GM, who points to the Roundstone Rye as proof. “Our original flagship single-barrel expression is perfect for summertime sipping. It is light and easy drinking, fruity and nutty, and quite perfect for cocktails, along with sipping neat.” Scott recommends mixing the spirit into a whiskey sour or a Horse’s Neck, which calls for two ounces of Roundstone Rye poured into an ice-filled rocks glass, with a dash of Angostura bitters. Top with ginger beer, and garnish with a long strip of lemon peel. SRP: $45

Starward Two-Fold: “Two-Fold” refers to the double grains used in this expression from Melbourne whiskey distillery Starward. Malted barley gives Two-Fold its depth, while Australian-grown wheat makes it aromatic. Aging happens in barrels once used to make Australian reds (Pinot Noir, Shiraz), and the result is a smooth, lightly spiced whiskey with notes of ripe banana, berries, and a hint of vanilla. Two-Fold just took home a silver medal from the San Francisco World Spirits Competition, and the brand prides itself on being a go-to refresher for Australian summers. Plus, at around $35 per bottle, the affordable price point makes this your approachable, go-to whiskey.

Other cocktails to try: the Two-Fold and tonic, replacing gin with the complex whiskey for a fast and refreshing summer cocktail. Or go full tropical with a passion fruit mojito. SRP: $35

High West Distillery Rendezvous Rye: The flagship whiskey from High West Distillery, Utah’s first legal distillery since 1870, the Rendezvous Rye is made with a blend of straight rye whiskeys. According to High West beverage director Steve Walton, this season’s Rendezvous Rye includes notes of poached pear, bitter orange, ground ginger, lavender, wet sandalwood, and tanned leather. “It is my favorite bottle to enjoy whilst sitting on the deck as a perfect summer’s day comes to an end,” he says. “As the sun sets on the horizon, drop in a good size ice cube and let the drink open up.” SRP: $70

Fukano 2020 Edition: A fifth-generation family-run distillery, Fukano is located on the Japanese island of Kyushu in Hitoyoshi, a city in Kumamoto prefecture. Because Japanese whiskey is distilled once, says Sam Filmus, president of spirits importer ImpEx Beverages, it has an umami sweetness. “Using rice creates a style of whiskey that’s soft, smooth, and pleasantly delicate,” he says. Aged in ex-sherry, red wine, and oak casks, and made using a combination of malted and unmalted rice, the Fukano 2020 Edition has an aroma of apple and rose, with notes of white tea and honey and a finish of coconut and banana. Because the distillery is small, each whiskey release is a limited one, making every bottle all the more special. SRP: $90

Benriach Original Ten: The Speyside region of northern Scotland is a protected region for Scotch whisky—home to dozens of distilleries, among them Benriach.

“Single malt Scotch whisky has such a diverse range of flavors, making for an incredible versatile spirit,” says senior brand ambassador Greg King. “Many, including myself, choose their dram based on mood, time of day, and time of year.”

The more than century-old distillery uses casks sourced from all over the world, and the Original Ten draws on a mix of ex–bourbon barrels, sherry casks, and virgin oak, resulting in an exceptionally smooth, well-balanced scotch with layers of ripe orchard fruit, French vanilla, and toasted oak. King prefers the Benriach Original Ten for his go-to summer whisky, using it in a classic Penicillin cocktail to allow for “so many of the flavors we typically associate with warmer months to all harmonize together. Notes of honey and lemon complement perfectly the ripe apple and pear orchard fruits that make up the Benriach distillery character.” SRP: $50