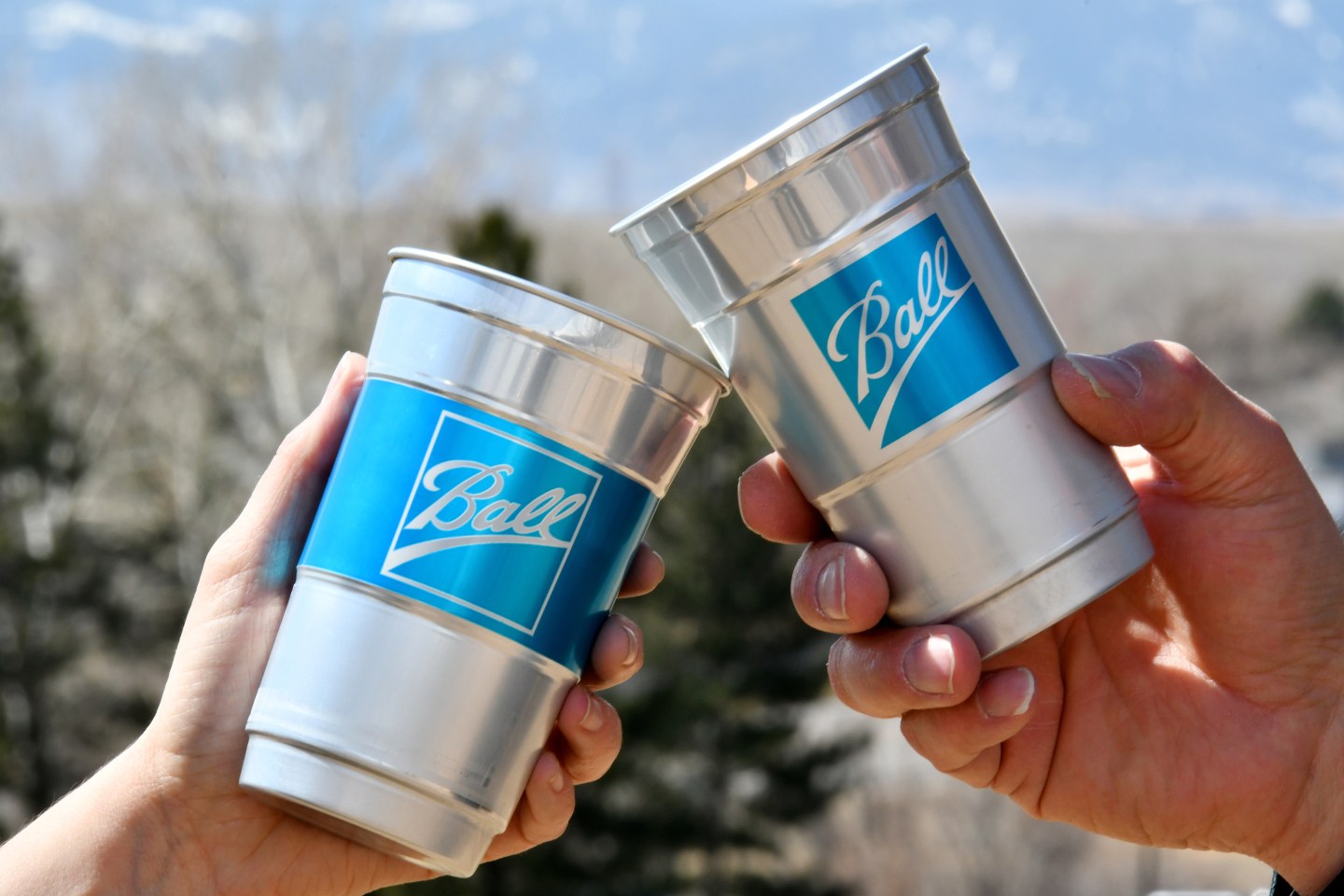 In contrast to plastic, which has a limited recyclable rate before polluting our oceans and landfills, aluminum has an infinite life span.
Courtesy of Ball Corp.

The owner of a small bar in Colorado was eager to replace his glassware, which was frequently broken or stolen by patrons. He wanted something different: a durable cup not as costly as glass. A vessel that did not pose an environmental conundrum like the only other option at the time: plastic.

Luckily, he had friends at Ball Corp., the Fortune 500 manufacturer of metal cans and packaging, whom he phoned to help. And over a few years, the conversation spawned the Ball Aluminum Cup, the first-of-its-kind rival to disposable plastics of yore. One that is cool to the touch, sturdy, and can spin like a windmill during a ferocious game of flip cup.

When the team at Ball conceptualized this cup, the company was nearing its 140th anniversary. It became one of the many sustainability initiatives that Ball has integrated into its expansive capabilities. More than a year after its inception, the cup is commonplace at retailers and a driving force at green-minded sports and entertainment arenas.

To understand the aluminum cup is to know the underlying differences between aluminum and plastic. For one, not all aluminum products are created equal. Extracting and refining raw bauxite ore (the main component in aluminum) takes two and sometimes five times as much energy to produce as new plastics. Using recycled aluminum, however, reduces that by 95%.

Aluminum, unlike plastics, is infinitely recyclable, giving it endless opportunities to engage in a circular system when and if recycling programs are in place. Because of this, The Aluminum Association estimates that almost 75% of all aluminum ever produced is in use today. In contrast, only 3% of plastic is still viable because of its degradation over time.

“If you compare plastic against aluminum and only look at the divergent composition, without taking into account the infinite recyclability of aluminum, the carbon footprint of plastic is better,” says Ball Corp. president Dan Fisher. If a circular system is sufficiently in place, using recycled aluminum reduces greenhouse gas emissions and the carbon footprint during production. However, when virgin material is used, it is crucial to lower energy through wind and solar power and other renewable sources to counteract the impact.

By the end of 2021, all of Ball’s U.S. operations will run on renewable energy and achieve 55% absolute reduction in its greenhouse gas (GHG) emissions by 2030. By eliminating the most significant issue in aluminum manufacturing, Ball’s aluminum cup has an advantage. “The reality is we use 72% recycled content,” Fisher says. “And under any measure, if you’re applying what’s actually happening today in the world and in the carbon footprint, aluminum is significantly better.”

Take me out to the Ball game

In 2019, Ball Corp. partnered with Kroenke Sports & Entertainment (KSE) venues—SoFi Stadium in Los Angeles; Emirates Stadium, home to Arsenal Football Club, in London; and newly branded Ball Arena in Denver—to swap plastics for aluminum cans, bottles, and cups, and vitalize recycling programs. They aim to create a better circular system at large-scale events, which will be fully realized at Ball Arena by 2022.

The environmental impact of sporting events is enormous. The fans, players, and teams travel from various locations to attend the game; the stadium burns fossil fuels to illuminate the field or court; the supply needs and waste of amenities, food, and packaging are extraordinary. An EPA study of stadiums’ environmental impact estimated game attendees generate 39 million pounds of trash per year from concessions and food packaging.

“Venues are a microcosm of society and cities,” says Roger McClendon, executive director of the Green Sports Alliance (GSA)—a trade organization engaging teams, conferences, governmental agencies, fans, and more in environmental operations. In its 11 years, GSA has helped green more than 340 affiliates across collegiate, professional, and international leagues. “When you think about the supply chain and all the things that go into it, you see the scale is massive.”

McClendon sees diverting waste from landfills as one of the biggest tasks for arenas. If 80,000 attendees are at a professional sports game, approximately 160,000 cups or bottles are used. Unless sporting events eliminate concessions altogether (and what fun is that?), it’s almost impossible to avoid it. Thus many venues are leaning into thoughtful procurement of packaged goods and better trash management. The aluminum cup has become an easy way to divert waste from landfills and engage the consumer.

“When you can’t reduce the actual physical container that a person is using, there are different ways to reduce the impact on the environment and sometimes even create a positive impact,” says GSA senior partnership manager Kristin Hanczor.

A core challenge is human error and cross contamination of waste with the recyclables, but Hanczor thinks clear signage, convenience, and incentivizing are key factors in determining consumer participation. “A lot of people are not actively trying to put things in the wrong place,” she says. “Oftentimes, it is about convenience, maybe not paying attention, and then just not really knowing and maybe being concerned to ask.”

At each location, Ball and KSE are increasing sustainable opportunities beyond the cup by focusing on clear communication and recycling infrastructure in-venue and by urging surrounding local communities to make recycling aluminum second nature. Additionally, KSE and Ball partner with area schools in the Green Assists educational program to promote aluminum recycling. Whereas the many tiers of plastics create confusion and defeat, aluminum is recyclable no matter what stage of its life.

Currently, lottery systems are in place at KSE venues to motivate attendees to participate. Some may win the opportunity to meet players and go backstage at concerts, while others can snag tickets for future events just for collecting their trash and throwing a cup away in the correct bin. “There are really engaging and entertaining ways we can do this. And our customers and we are exploring it,” says Fisher of Ball and KSE’s continuing efforts to grow the initiative.

Partnerships and products like the aluminum cup have opened doors for Ball to stimulate sustainability within the industry. “The aluminum cup is giving us an opportunity to sit down with major retailers in a meaningful way to have these conversations. They’re happening today in a way that we couldn’t a few years ago,” says Fisher.

He noticed the shift around 2001 when David Attenborough’s Blue Planet docuseries illustrated the grave consequences plastics have on our oceans. Now, increasingly, retailers and consumers want a more environmentally friendly option on their shelves. New products in cans, such as water and other beverages, are on the rise. In 2019, 67% of new drinks launched in the United States were sold in aluminum cans.

Though neither aluminum nor plastics are especially beneficial to the environment, global societies have grown used to the convenience of disposable containers. The absolute solution doesn’t lie in continuing to succumb to these deeply ingrained behaviors. However, it is a big step to do better, to manufacture in a more sustainable way, and to drink and recycle more responsibly.