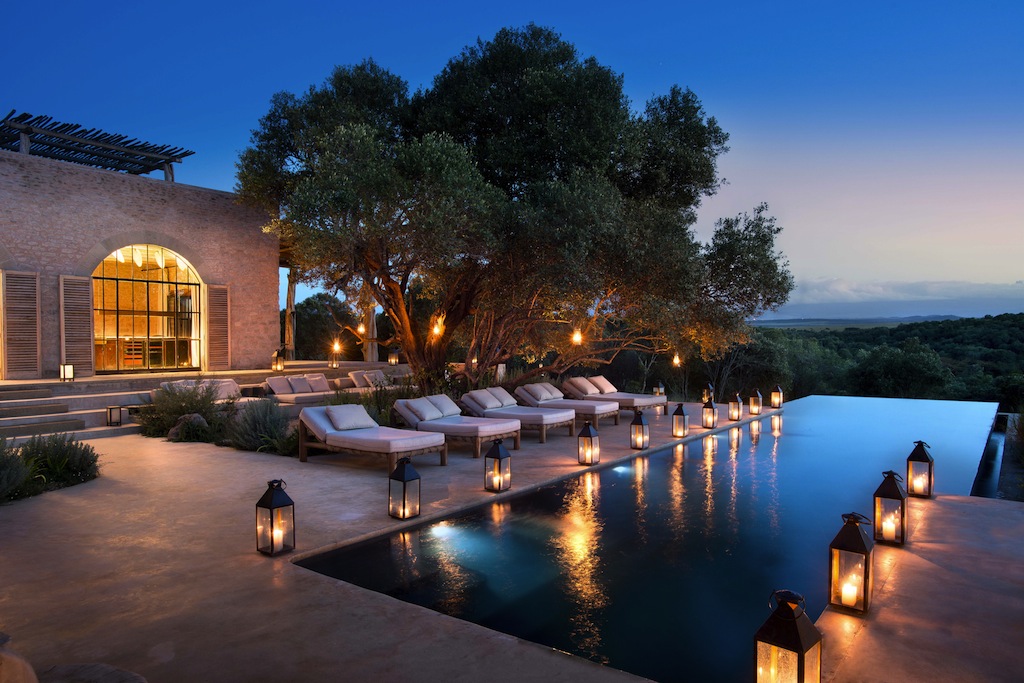 Ebbing sunlight illumines the flaxen hills of the Borana Conservancy as our open-sided 4×4 rumbles up the dirt road in the withered heat of late afternoon. Having embarked minutes before on our first game drive in Laikipia, the gateway to Kenya’s northern frontier, we scan the horizon for signs of life—a requisite ritual of the enthralling treasure hunt that is safari.

The jeep grinds to a halt as we spot a massive white rhino 10 yards to our left. Raising his huge head from the grass, he eyes us warily and edges closer, relying on his keen sense of smell and hearing to suss us out. Then, seemingly underwhelmed, he kicks up his three-toed feet comically, huffing and snorting as he turns tail and trundles away through a patch of wild hibiscus.

Our guide, Ekai, who’s spent nearly 25 years traversing this dazzling landscape, turns from the wheel toward our hushed laughter, his eyes smiling above his mask: “I think he just wanted to say hello!”

Such extraordinary encounters are enviably routine in the Laikipia Plateau, a rugged hinterland that stretches from the foothills of Mount Kenya west to the Great Rift Valley, spanning some 2,000,000 equatorial acres of gorgeously varied wilderness. Once a sprawling patchwork of farms and cattle ranches—many of which have been stitched into conservancies—it’s now home to roughly half of the remaining rhinos in East Africa, having emerged in recent years as one of the continent’s most compelling conservation success stories.

And as international travel inches back to life, the region’s reputation as a relatively under-the-radar destination for safari purists, equipped with some of Africa’s best exclusive-use properties, makes it perhaps the most spectacular setting on Earth for a peerless private safari.

The Most Beautiful House in Africa

After our memorable rhino run-in—and an ensuing half-hour parked beside four sleepy young lions relishing twilight’s rose-skied languor—we head back to Arijiju, the first stop on our Laikipia itinerary.

Built into a hillside, the five-bedroom villa, crafted of hand-chiseled stone, was designed to integrate seamlessly into its surroundings. Completed in 2016 by 400 artisans over 21 months, its vaulted archways and hidden passageways reference influences like Ethiopia’s rock-hewn churches of Lalibela and Provence’s 12th-century Thoronet Abbey. Triple-height Lamu-style doors and Moroccan antique rugs herald its thoroughly African DNA and interiors feature refined accents like crystal chandeliers and custom copper bathtubs to create a symphony of textured luxury. It’s at once modern, rustic, and achingly chic.

The owner, a longtime patron of the Borana Conservancy, spent three years scouting the perfect spot to break ground. The light’s movement during the day and the views of sunrise, sunset, and Mount Kenya informed the siting, as did the way birdsong lilts through the surrounding Sieku Valley at dawn. The original blueprint was shifted to incorporate a 400-year-old wild olive tree that now shades poolside chaises from the sweltering sun. Along with a cloistered courtyard teeming with jasmine and lavender, it’s a sublime centerpiece of the grounds.

Arijiju’s culinary approach is equally discerning. Its phenomenal food—prepared with top-notch local ingredients by the gifted staff—plays a key role in the property’s aim to rejuvenate guests in body and mind. Breakfasts of vegetable-filled frittatas, crispy Scotch eggs, and heaping fruit plates set you up for a day’s safari. At lunch, a chickpea and eggplant salad topped with edible flowers complements pizza fresh from the wood-burning outdoor oven. With a crisp rosé wine in your hand, elephants swigging from the property’s infinity pool join you in a toast.

World-class wellness facilities—including tennis and squash courts, a yoga pavilion, and a hammam—spoil guests for choice. A massage from Frida, the exuberant and expert masseuse, is a must; in keeping with Arijiju’s exalted standards, the owner sent her to Thailand to learn Thai technique and reflexology straight from the source.

Your Own Private Kenya

A quick charter flight from Arijiju to Ol Jogi offers a bird’s-eye view of Laikipia’s diverse terrain: Borana’s rolling green-gold expanses give way to vast plains studded with kopjes (red-rock outcroppings) rising from a loden-hued, shrub-and-acacia sea. Such otherworldly ambience seems apropos, given the 58,000-acre, wild wonderland embodies a universe unto itself.

Once a cattle ranch, Ol Jogi was for 35 years the private domain of the art world’s Wildenstein family, before scion Alec Wildenstein, Jr., threw open its doors to guests in 2013 to subsidize skyrocketing conservation costs. Now, every dollar visitors spend is plowed back into preserving the pristine landscape for future generations.

Meals are similarly refined affairs, with silver-plattered buffet lunches of inspired salads fresh from the chef’s garden, and scrumptious dinners deftly served by white-gloved waiters whose warmth confutes any air of stuffiness. You’ll never dine at the same table twice: A tour of the colossal china closet reveals easily the largest collection of Africa-themed fine tableware ever assembled, stacked high with irreplaceable pieces from brands like Hermès, Christian Dior, and Raynaud.

For all its priceless rarities and experiential wonders, Ol Jogi’s robust wildlife habitat—which guests have all to themselves—is the true treasure. Game drives, bush walks, horseback safaris, hikes—Africa’s impossibly starry sky’s the limit here. Home to 75 black rhino, Ol Jogi is among the world’s last strongholds of the species, according to Jamie Gaymer, conservation and security manager since 2007; its total rhino number 112, versus 34 when he arrived. Meanwhile, two other endangered populations—Grevy’s zebra and reticulated giraffe—stand at some 500 (likely unmatched anywhere else) and 400-600 (census results are imminent), respectively. Leopard, lion, cheetah, and wild dog also stalk the conservancy’s boundless reaches.

Ol Jogi hasn’t lost a rhino to poaching since 2015, owing to a state-of-the-art surveillance operation comprising more than 100 rangers, 32 specialists armed with government-issued assault rifles (a stark reminder of the crisis’s gravity), thermal-imaging and A.I. technology, and attack dogs, among other defenses. The conservancy also runs one of Africa’s most sophisticated wildlife veterinary clinics, endorsed by the Kenyan Wildlife Service to treat injured and orphaned animals (often brought in by local residents) and release them back into the bush once they’ve recuperated in its wildlife rescue center.

Animals unable to return to the wild make their permanent home at the rescue center, which welcomed some 14,000 children in 2019 to learn about Ol Jogi’s conservation programs. Alfie, a blind, 12-year-old black rhino, may be its most beloved resident and ambassador: every evening, he ambles back to his boma after a 10-hour foraging expedition with a security escort and devoted minder, who walks beside him always.

Opened in 2013, Segera is an emerald oasis in a 50,000-acre golden savannah, and just a 10-minute flight southwest from Ol Jogi. Crosshatched with brick paths and bursting with soaring candelabra trees and bougainvillea blossoms, the lushly landscaped grounds form a radiant backdrop for show-stopping sculptures displayed throughout. The works belong to the largest private collection of contemporary African art in existence, amassed by Segera owner and current Harley Davidson CEO, Jochen Zeitz.

With three bedrooms and a private pool, Segera’s Farmhouse is perfect for families.
David Crookes

Located in the heart of the Laikipia Plateau, Segera plays a pivotal role in the Ewaso ecosystem, home to the greatest diversity of large mammal species of any site its size on the planet. After acquiring the onetime ranch in 2005, Zeitz’s team removed miles of unnecessary fencing to re-establish vital migratory routes between eastern and western Laikipia for elephants and other animals. Amidst its open plains, seasonal river valleys, and verdant wetlands rich in birdlife, guests might encounter all the big cats, as well as eland, impala, zebra, and gazelle—even endangered Patas monkey and Lelwel’s hartebeest.

Sustainability, the overarching theme of the Segera ethos, manifests in an array of innovative projects based on the Zeitz Foundation’s “4 Cs”—conservation, community, culture, and commerce. Female empowerment is front and center: besides a beading collective that provides income to women from three nearby tribes, the foundation launched East Africa’s first all-women, anti-poaching ranger academy in 2019, recruiting its first class of trainees from local villages. Graduates of the six-month program now help secure the property and train new recruits.

Segera’s wide range of singular experiences leave an indelible impression. Guests can spend a spine-tingling night in the wild in the Bird’s Nest, a hideaway high above ground with an en-suite bedroom and a rooftop bed for stargazing. After a picnic-style dinner and drinks, you’ll drift off to the indubitable roar of lions and the steady buzzing of the bush. Or stomp your feet in the dirt to lay a track and stride off with Segera’s rangers to hide deep in the tall grass, its tracker dog unit hot on your trail. You won’t soon forget the bloodhound’s unabashed glee when she bounds toward you and receives a sausage reward for a mission accomplished.

For an exploit that’s literally tough to top, Segera’s charismatic general manager, Jens Kozany, can arrange a helicopter tour with longtime local operator, Tropic Air. Choppering through otherwise impassable valleys aboard a cutting-edge Airbus H130, rivers of treetops racing by beneath you as Samburu cattle herders smile skyward and wave, conjures an emotional rush difficult to describe, and possible only in Africa.

Travelers need a PCR-based negative COVID-19 test, conducted within 96 hours of departure, to board a flight to Kenya. U.S citizens arriving from the United States are exempt from quarantine. Visit the Kenyan Ministry of Health’s COVID-19 website for updated information.

Founded by native Kenyans Felix and Jane Pinto, Micato Safaris has been designing luxury safaris for 55 years, offering unmatched on-the-ground access and expertise, including a 24/7 concierge team. The company manages all aspects of required COVID-19 testing for clients prior to their return to the U.S., without altering their safari itinerary, and covers the cost.

For every person Micato sends on safari, its AmericaShare foundation funds the full cost of a primary and secondary education for a child from Mukuru, one of the largest slums in Nairobi. Thousands of children have benefitted from the One for One Commitment program since its launch in 2009.

With five large bedroom suites, Arijiju can accommodate up to 10 adults and 4 children on an exclusive-use basis.

Ol Jogi’s accommodates private groups of 4-20 guests in its 12 cottage suites, and larger groups for special events with its “Ol Jogi Under the Stars” luxury tented camp.

Segera’s six garden villas and three spacious homes can host up to 30 people. Though not required, buyouts are available.

With more than 100 weekly flights to and from 23 African destinations—including 14 weekly flights to Nairobi via Doha—Qatar Airways continues to expand its award-winning service to the continent, while its Qsuite business class is arguably the world’s best. Kenya Airways offers the only direct route between New York and Nairobi; contact the airline for details, as weekly frequency has been impacted by the pandemic.