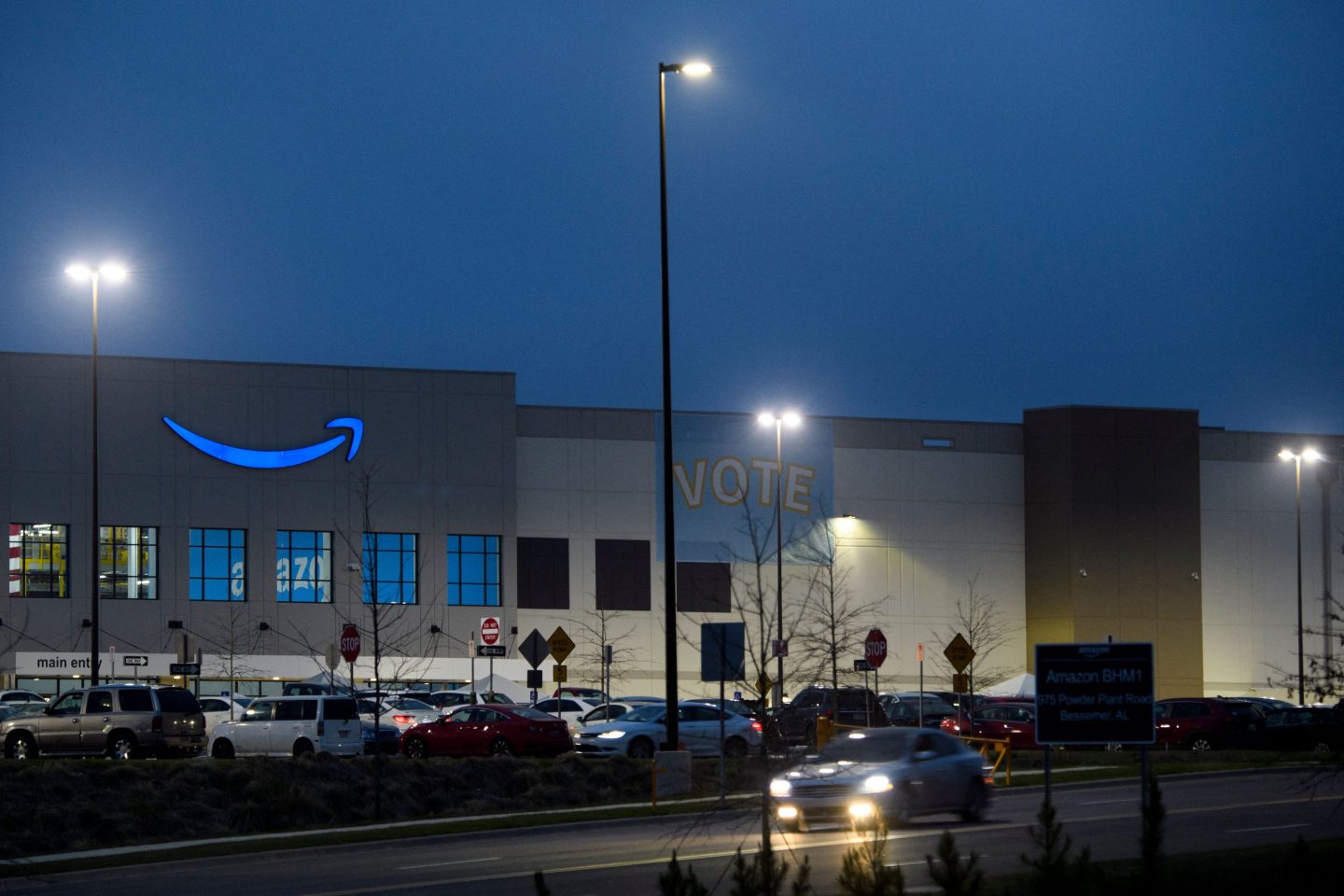 Amazon is heading into the final stretch of a union push in Bessemer, Alabama with a sizeable lead over labor organizers.

With nearly half the ballots counted Thursday night, 1,100 warehouse workers had rejected the union while 463 voted in favor of it.

The count will resume Friday morning in Birmingham, Alabama, where agents for the National Labor Relations Board are counting each vote by hand. The Retail, Wholesale and Department Store Union, which is organizing the Amazon workers in Bessemer, said that 3,215 votes were sent in — about 55% of the nearly 6,000 workers who were eligible to vote. Whichever side secures the majority of the votes will be declared the winner.

Stuart Appelbaum, the president of the retail union, struck a grim tone in a statement Thursday night as the initial results rolled in, signaling that the union will put up a legal fight if the vote doesn’t go its way.

“Our system is broken, Amazon took full advantage of that, and we will be calling on the labor board to hold Amazon accountable for its illegal and egregious behavior during the campaign,” he said, without specifying any allegations. “But make no mistake about it; this still represents an important moment for working people and their voices will be heard.”

Amazon did not respond to a request for comment.

Both sides had launched a spirited campaign to win over workers. Amazon hung anti-union signs throughout the warehouse, including inside bathroom stalls. It held mandatory meetings to convince workers why the union was a bad idea and also argued that it already offered more than twice the minimum wage in Alabama plus benefits without workers having to pay union dues.

Meanwhile, union organizers stood outside the warehouse gates trying to talk to people driving in and out of work. It also had volunteers call all of the nearly 6,000 workers, promising a union will lead to better working conditions, better pay and more respect.

The vote itself has garnered national attention, with professional athletes, Hollywood stars and even President Joe Biden weighing in on the side of the union.

But Bessemer was always seen as a long shot since it pitted the country’s second-largest employer against warehouse workers in a state where laws don’t favor unions. It is only the second time in Amazon’s 26-year history that an organizing effort from within the company had come to a vote. The last time, in 2014, a small group of mechanics at an Amazon warehouse in Delaware voted against unionization.

For Amazon, which has more than 950,000 workers in the U.S. and has fought hard against organizing attempts, a union loss could chill similar efforts around the company.

Labor experts and union leaders believe, however, that Bessemer could still inspire other Amazon workers to try to unionize at the company’s hundreds of facilities across the country. And it could spread beyond the company, spurring action at Walmart, the nation’s largest employer, and other big retailers.

Richard Bensinger, a former organizing director for the A.F.L.-C.I.O. and the United Automobile Workers, noted the large number of workers who didn’t vote in Bessemer: “To me, that’s the all about the paralysis, the fear. They don’t want to be supportive of the company but they are afraid to stand up for the union.”

Bensinger, who said he is involved in early unionization efforts by Amazon workers the U.S. and Canada, spoke to a coupled of those workers Thursday night “trying to tell them what happened so they wouldn’t be discouraged.”

Unions can file an objection within a few days of the vote count if they lose, accusing the employer of tainting the election in some way, said Andrew MacDonald, a partner at law firm Fox Rothschild. If the labor board agrees, it could call for another election.

The labor board can also overturn the results, but only if it sees the employer’s conduct as “especially egregious,” MacDonald said.