This chef had to close her restaurant because of COVID, but kept the brand alive via online retail 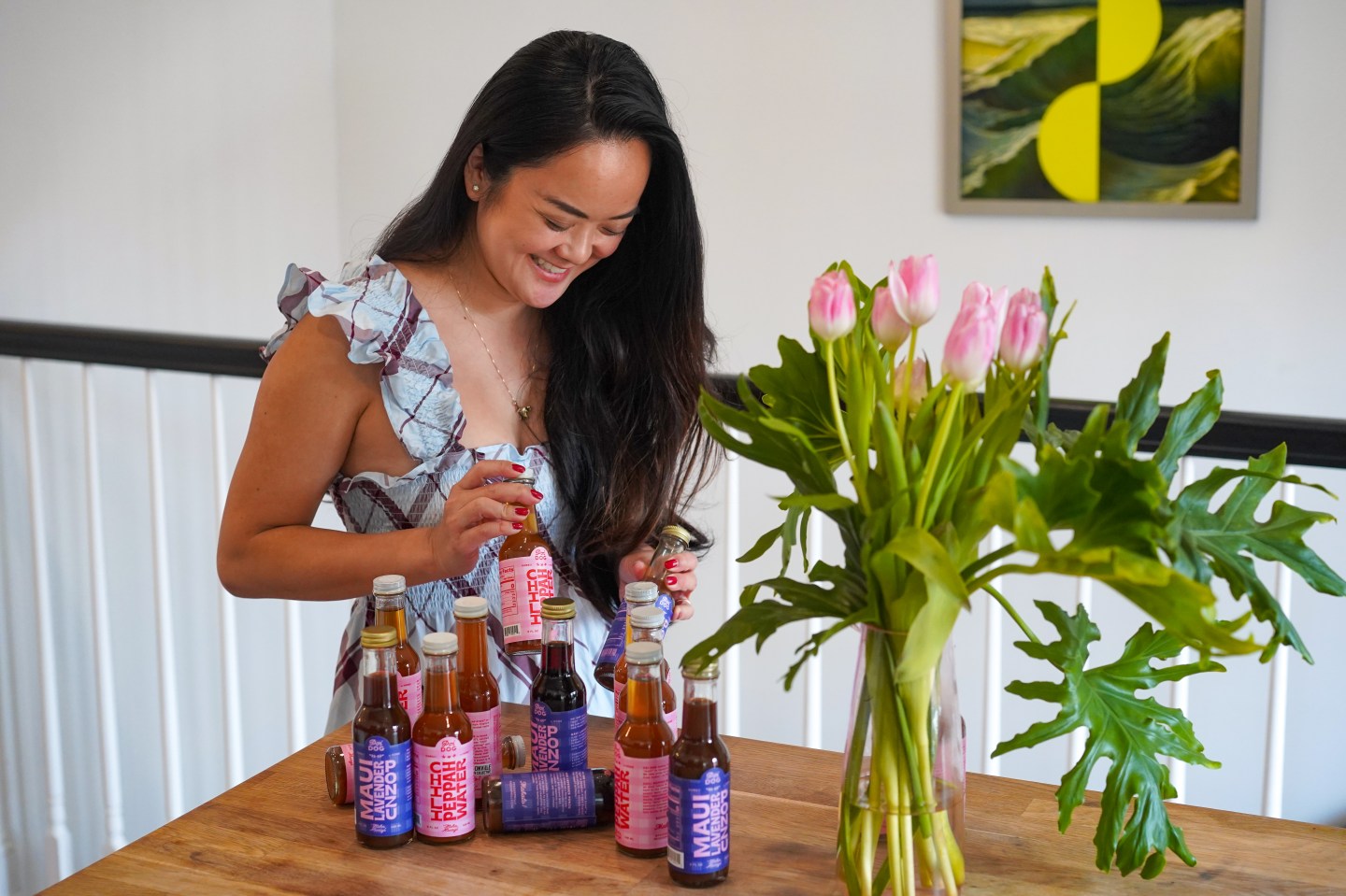 When Kiki Aranita finally cried last September, it wasn’t because her restaurant had closed. Poi Dog, which the 36-year-old had opened with her former partner in 2013, had grown from a food truck into a popular fast-casual restaurant with a neon pink Aloha sign, her grandfather’s art on the walls, and a standing order for 30 to 40 pounds of fresh ahi a day.

Poi Dog was the first in Philadelphia to feature the local cooking of Hawaii, where her dad’s side goes back five generations, and it meant everything to her, but when Aranita decided to make its temporary pandemic hiatus a permanent closure in July.

“I blacked out,” says Aranita. “I went into organizational overdrive and wasn’t processing emotions. I turned into a complete robot.”

The peppers brought the tears. Months before COVID-19 ran away with the foot traffic and catering revenue Poi Dog depended on, Aranita had agreed to participate in the Forever Food Experience, an agrobiodiversity symposium with Pocono Organics, a 351-acre regenerative organic farm in the Pennsylvania mountains. The farm sent her a bushel of Red Rocket, Lunchbox, and Padrón chilies, “and some of them were so spicy I was literally crying,” she says.

Aranita had to figure out a way to use the chilies for the event, so she decided to make Chili Peppah Water: “[It’s] a really common condiment in Hawaii. Something you would make at home. Or restaurants would basically get a bunch of vinegar and then cram a few peppers, maybe some garlic or onions, in it, and just put it on the tables next to the soy sauce, typically into a repurposed Kikkoman container.”

The ‘Chili Peppah Water’ sauce lends a spicy, vinegary tang, a gingery kick laced with Hawaiian Sea Salt and it is made with seasonal Pennsylvania peppers so batches will change depending on when they are brewed.
Tami Seymour

At the time, Aranita didn’t know she was inadvertently starting a new business, one that would create a post-restaurant income stream and keep the Poi Dog brand alive.

Ori Zohar, co-owner of the sourcing-centered spice company Burlap & Barrel, tried Aranita’s Peppah Water at the Pocono Organics event and encouraged her to bottle it. “There were all these people that wanted to eat at her restaurant and couldn’t, so I encouraged Kiki to listen to what her fans were asking for,” he says—that is, a way to experience Poi Dog at home.

Aranita had dabbled in online sales before COVID—with gift cards, merch, a run of tinted Kauai beeswax lip balm—but saw them explode during the summer tsunami of customer goodwill. “I went from selling four T-shirts a month to four T-shirts every 10 minutes,” she says. But despite the crash course in e-commerce, a food line was a different beast. “Ori and Ethan [Frisch, Zohar’s partner] pretty much gave me a model on how to go about doing this. I had nightmares about Bubble Wrap.”

During the Great Recession and the decade-long artisan-food gold rush it triggered, the route to retail packaging was very prescribed: “Sell locally in the community, which offered a pretty limited audience,” Zohar says. “Or go to a major retailer and convince them [to carry the product]—through the layers and layers of approvals—while giving up somewhere between 55¢ and 70¢ out of every dollar and figuring out how to build a business with the crumbs that remain.”

From the vantage of 2021, it’s easy to boil down the moonlight chocolatiers, pickle princes, and tahini Fellinis of the early 2010s to a cliché, a punch line, or a parable of counterculture and capitalism. There were some snake oil salespeople in that class, sure, but they were far outnumbered by makers earnestly grinding at gourmet Monopoly, hoping to make it all way to the Whole Foods Boardwalk. In the past few years, synergistic advances in web building, e-commerce, and credit card processing technology from companies like Shopify and Square have totally upended that old game board, making it easier for makers to sell their products—and themselves—themselves. “If I wanted to start [an e-commerce] business 10 years ago, I would have to code it myself or hire a bunch of engineers,” Zohar says. “Now I can set it up in just a few hours. All the friction has been pulled out of the process.”

Chefs using retail as a brand extension is nothing new, but the pandemic has “highly accelerated the process,” says Dana Cowin of Giving Broadly, an online marketplace for women-made food products. “[Tech has] put the method of distribution in the hands of the chef. Chefs like David Chang were making deals for wide distribution in grocery stores; now you can prove [a product] on your website before you sell it to Unilever.” If a chef even wants to pursue that. “People maybe have their eyes set on a big distributor or producer, but [many are] actually doing something that’s for their community, for themselves, and for their staff. They’re able to create a gentler business.”

In November, Aranita processed her first batches of Poi Dog Chili Peppah Water and the second product in her line, Maui Lavender Ponzu, a fragrant potion of yuzu, soy, dried bonito, and flowers from Ali’i Kula Lavender Farm. She hired Philly-based firm the Heads of State to design the vivid red and blue-violet labels, whose gingham-like background mirrors the palaka fabric worn by sugarcane plantation workers on the islands. “The main retailer of the fabric was the Arakawa Store in Waipahu, where my grandmother worked in the notions [sewing] department,” Aranita says. “She likely sold that fabric to many, many workers.”

For distribution she turned to longtime friend Jennifer Yoo of Gotham Grove, the Brooklyn-based Korean food importer whose infrared-roasted perilla oil had given Poi Dog’s salmon poke its hints of mint and spice. Like Zohar at Burlap & Barrel, Yoo had encouraged Aranita to start her own line and had seen Gotham Grove’s online sales explode during the pandemic. “Our business from restaurants and chefs got negatively hit, but our e-commerce business increased four or five times within a month or two,” Yoo says. “With restaurants shutting down, home cooks wanted to mimic flavors they would have when eating out and started to become more adventurous,” snapping up Gotham Grove’s strawberry gochujang and winter melon vinegar like ketchup and mustard.

Zohar reports a similar experience: “In 2019, 50% of our revenues came from restaurants. In March 2020, it was 0%. We had this come-to-Jesus moment where we thought we’d have to close the business. Then in April and May all these home cooks came out of the woodwork, and we went from, ‘What if we have to close?’ to ‘How do we keep up with this demand?’”

Aranita’s sauce business is young, but the built-in customer base is already propelling it to success. Since launching on the Poi Dog site and on Gotham Grove’s digital marketplace a few days before Christmas, she’s sold 50 cases of product. The income is nice but hardly the point. “Outwardly this is a way of carrying on the Poi Dog legacy,” Aranita says. “But it’s more of a way of carrying on the relationships that I made, the friendships that I made, by running Poi Dog.”