Business must take a stand on Myanmar’s military coup 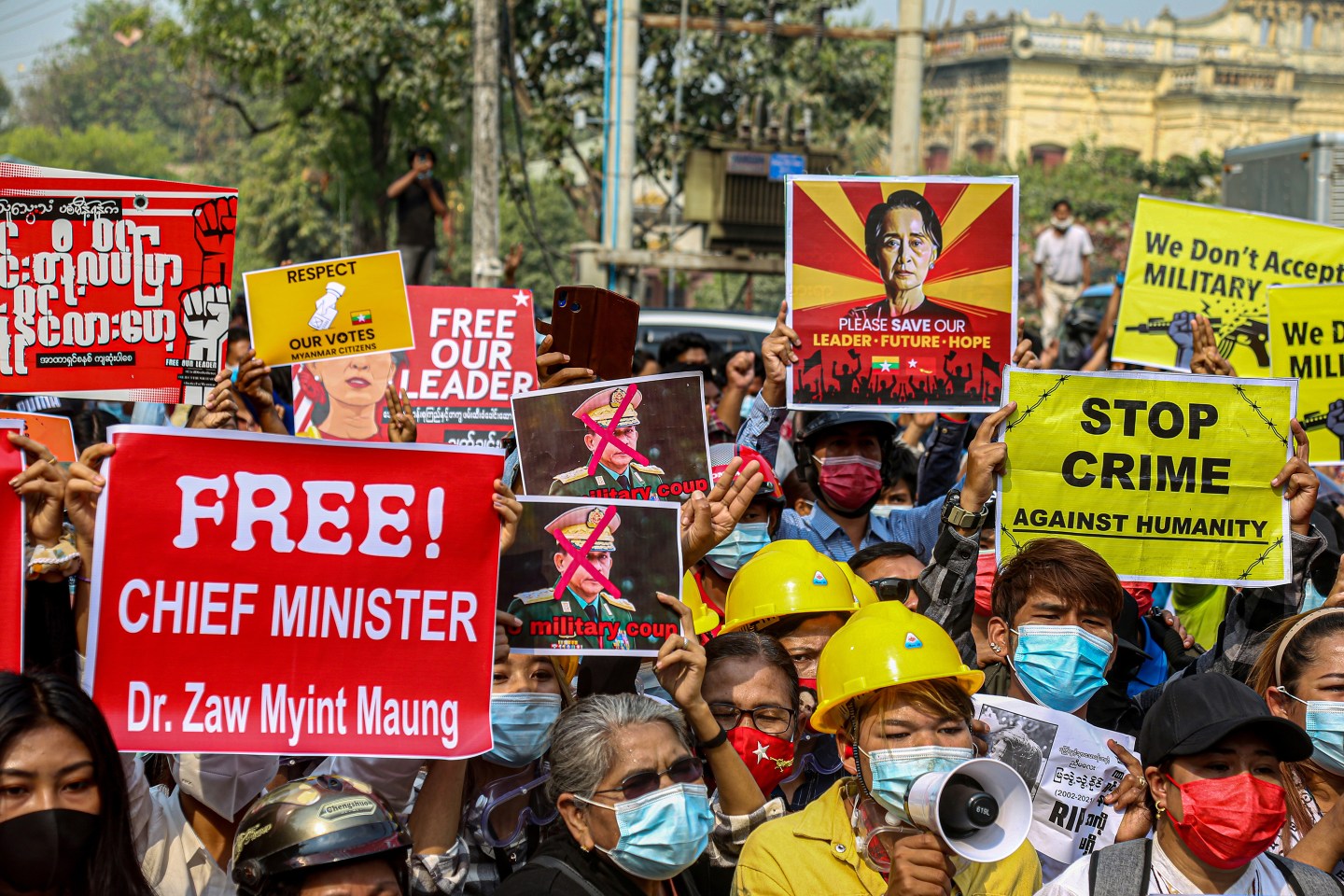 On Feb. 1, as newly elected members of Myanmar’s parliament waited to be sworn into office, the country’s military forces launched a coup. The Tatmadaw, Myanmar’s military, seized power—detaining state officials and severing mobile and Internet connections across the country.

This was just the beginning of a Tatmadaw-declared one-year state of emergency. Power now rests with commander-in-chief Gen. Min Aung Hlaing. While Hlaing says that the military is on the side of the people and will form a “true and disciplined democracy,” his record says otherwise.

He has long reigned over Myanmar’s military as it has been accused of genocide and crimes against humanity against the country’s Rohingyas and war crimes against other ethnic minorities. The international community has condemned Hlaing for these atrocities—with the UN Human Rights Council calling for his prosecution for genocide.

The international business community knows of the military’s heinous abuses. A 2019 UN fact-finding mission found that companies with ties to Myanmar’s military are at “high risk of contributing to, or being linked to, violations of human rights law and international humanitarian law.”

The message of the UN team’s investigation was clear: Companies should not do business with the military or its enterprises—Myanmar Economic Holdings Limited (MEHL) and Myanmar Economic Corporation (MEC).

Why, then, have the last two weeks seen companies scrambling to determine if they have ties to the Tatmadaw, MEHL, or MEC?

This can no longer remain the status quo. Stakeholders expect companies to operate with integrity. It shouldn’t take a catalyst like this month’s coup for corporate leaders to find their moral compass.

The events in Myanmar must serve as a turning point for how responsible business reacts in times of acute political crisis. Principled corporate leaders can meaningfully move forward by implementing human rights and environmental due diligence and protecting workers’ rights and democratic institutions.

Companies have a responsibility to conduct human rights and environmental due diligence under the UN Guiding Principles on Business and Human Rights. However, the gap in implementation is large—and it’s why many companies are unaware of their extant ties to the Tatmadaw, MEHL, or MEC. Some countries and regions, including the European Union, are moving to mandate these processes. In the meantime, the responsibility lies with companies themselves.

The 2019 UN fact-finding mission team recommended that businesses operating and investing in Myanmar should have a human rights due diligence process to identify, prevent, mitigate, and account for their human rights impacts. The steps companies need to take have been clear.

Human rights and environmental due diligence can also help avoid the trap of comprehensive sanctions. Divesting out of Myanmar entirely is not the answer. Such moves will only harm the country’s small and medium enterprises and civilians. Companies need a mechanism to target the country’s policies.

We’re seeing some companies recognize that the risks of doing business with Myanmar’s military come at too high a cost. Kirin, the Japanese beverage giant, announced last week that it would cut ties with MEHL as the military’s actions were in violation of its human rights policy.

Executives would do well to follow Kirin’s example—and go further. Companies should also publicly disclose key details—such as names, addresses, and ownership—of the businesses they work with in Myanmar. Companies have nothing to lose, and a significant amount to gain, in showing that they have no ties to the Tatmadaw, MEHL, or MEC.

Companies’ responsibilities in political crisis also extend to their workers and democratic rights and institutions. Protests are erupting across the country. Many workers are joining them, risking their lives and livelihoods in the process. Companies must protect them by securing their physical safety and their jobs. By staying silent, companies fail in their responsibility to protect their workers’ human rights and contribute to an unstable operating environment for business.

The right to freedom of expression, association, and assembly is an important pillar of a thriving private sector. The success of business depends on a level playing field, accountability, and rule of law—all of which are better guaranteed in democracies.

That means the private sector has a vested interest in protecting democratic processes and rights. This responsibility no longer lies just with activists, union leaders, diplomats, and other members of civil society. It’s why leaders like us have come together in groups like The B Team to put forth a new leadership model: one which recognizes that challenges like these call for radical collaboration.

The threat to democracy, rule of law, and human rights in Myanmar must mark a turning point. No company can consider itself successful by 21st-century measures if it is contributing to human rights violations. It shouldn’t take a coup to recognize this. The longer companies wait to act, the greater the risk to their workers, operations, and bottom line becomes.

Sharan Burrow is vice chair of The B Team.