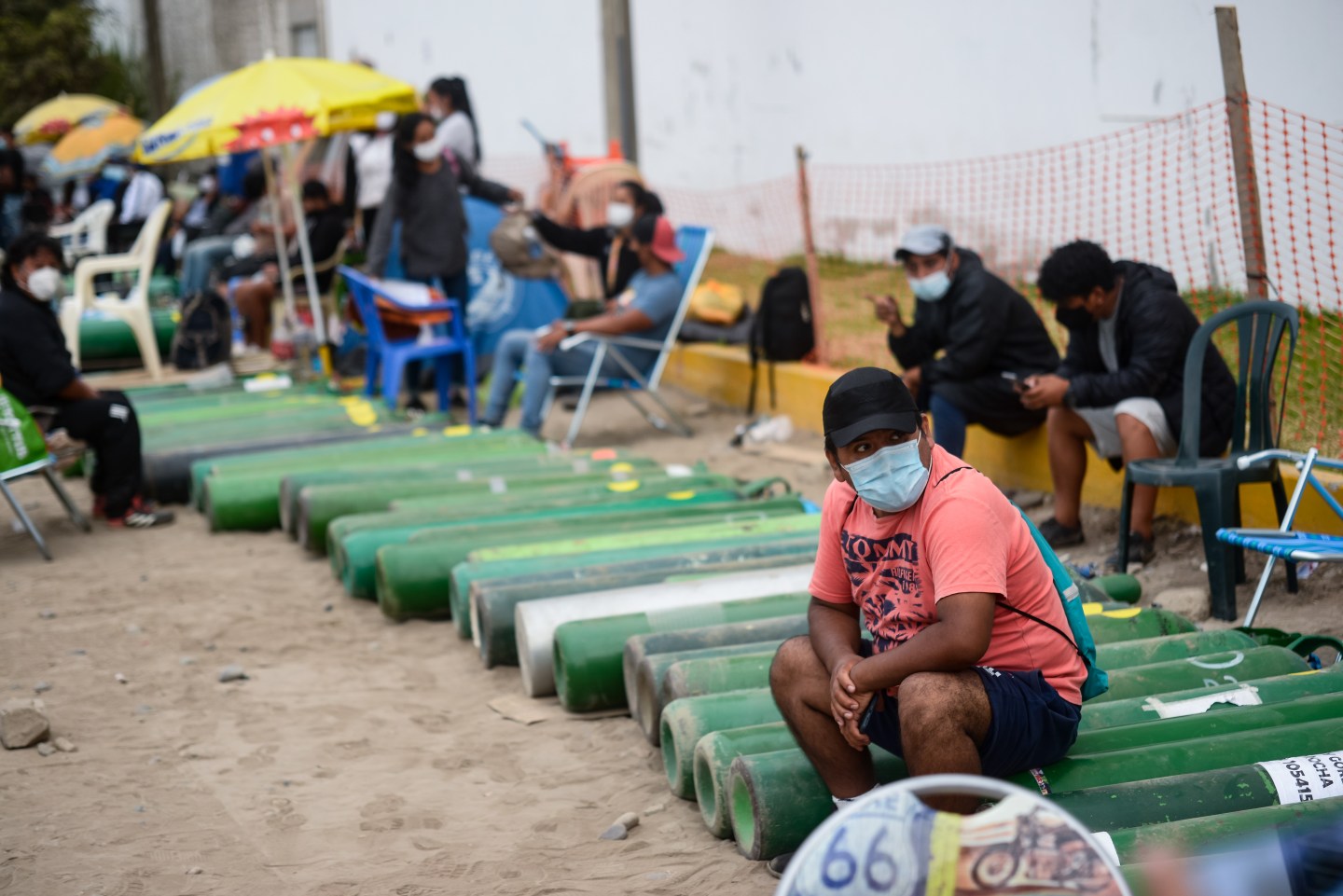 People wait in line to refill medical oxygen bottles in Lima, Peru. In low- and middle-income countries, writes the author, "almost half of hospitals have an inconsistent—or non-existent—supply, resulting in unnecessary patient deaths and huge bills for families."
Miguel Yovera—Bloomberg/Getty Images

After years of campaigning, the pharmaceutical industry is inching forward in providing access to life-saving medicines in low-income countries, though much remains to be done. But healthcare is not only about drugs and vaccines. The COVID-19 pandemic has exposed a neglected access crisis in another vital area: medical oxygen.

Across much of Africa, as well as parts of Asia and Latin America, a lack of medical oxygen is leaving doctors unable to treat patients.

In the battle against the pandemic, low- and middle-income countries (LMICs) currently need some nine million cubic meters of oxygen every day, an unprecedented amount. Unfortunately, almost half of hospitals in these countries have an inconsistent—or non-existent—supply, resulting in unnecessary patient deaths and huge bills for families forced to purchase costly cylinders on the private market for relatives.

This is unacceptable. A joined-up solution is necessary to address the problem of medical oxygen supply, not only to help deal with the current pandemic but to save millions of lives in the long term. Oxygen is vital for treating other deadly conditions, including pneumonia, which claims the life of a child every 39 seconds, according to a UNICEF study.

The worldwide supply chain of medical oxygen is complex. In most of Europe and North America, it is delivered by tanker, stored in large vessels, and eventually piped directly to bedsides. But many poor countries lack this infrastructure and rely instead on cylinders, which increases the price per volume used.

Fixing the problem requires leadership from the companies that dominate the industry. They must be proactive in finding new ways of improving the supply and reducing the cost in LMICs on an emergency basis, to address COVID-19 demands, and to ensure the long-term healthcare gains that are central to achieving the United Nations Sustainable Development Goals by 2030.

So how is the industry shaping up? To answer that question, the Access to Medicine Foundation has been partnering with the Every Breath Counts Coalition to engage oxygen companies and other stakeholders on the access issue. Our aim is to push for change, in the same way as we have done for more than 15 years in pharmaceuticals, since it is clear the medical gas industry can and should do more.

To date, there have been limited steps to address bottlenecks in particular markets. While welcome, these have fallen well short of a comprehensive strategy. The patchy response so far may reflect the fact that these companies are conglomerates where medical oxygen is only a part of their gas business. As a result, they have historically had limited involvement in the global health agenda.

France’s Air Liquide, which has operations in around 80 countries, has been the most visible in taking action. They have offered to make large quantities of liquid oxygen available at cost to relieve shortages in the worst-affected LMICs as part of a COVID-19 Emergency Oxygen Response. The group has issued a “force majeure” notice to industrial oxygen clients in South Africa to redirect supplies to public hospitals. And in Brazil it recently agreed to supply six liquid oxygen trailers with around 100,000 cubic meters of oxygen for the hard-hit Amazonas state. Air Liquide also has a partnership with UNICEF to equip primary healthcare facilities in five districts in Senegal.

U.S.-German Linde, which operates in 100 countries, implemented a similar force majeure action in South Africa via its Afrox subsidiary and is working with USAID to increase the supply of oxygen in that country up to eight-fold. Globally, it has increased oxygen production at air separation units and has donated $1.5 million for hospitals, healthcare facilities and affected communities.

U.S.-based Air Products has mobilized to meet increasing oxygen demand and is supporting a few medical facilities–it reports an example of commissioning a liquid oxygen tank and transfer system in Kerala, India, within a week.

Among smaller companies, Germany’s Messer says it has expanded medical gas supply systems in hospitals in the EU, China, Vietnam, the United States, Canada, Brazil, Colombia and Chile. The other two companies in the top six, Japan’s Taiyo Nippon Sanso and Italy’s Sol, have yet to provide details on their actions to meet global need.

Overall, the disjointed approach is reminiscent of the position pharmaceutical companies were in several years back. Some medical oxygen firms are taking small steps, but these are benefiting only very few patients, with little ambition to scale. Investors in these medical gas companies should engage these companies to step up their game and call for reports on concrete actions in tackling this issue. In the pharmaceuticals sector, shareholders are already flexing their muscles in this way, with more than 100 investors using my organization’s Access to Medicine Index to benchmark drug companies.

A small group of enlightened pharmaceutical companies have shown what can be achieved by long-term access planning, building local capacity, and resetting corporate priorities—urged on by investors who increasingly recognize the reputational and long-term commercial risk of failing to act.

As more patients in poor countries are left fighting to breathe, the companies that dominate the medical oxygen market have a duty to do more.

Jayasree K. Iyer is the executive director of the Access to Medicine Foundation.