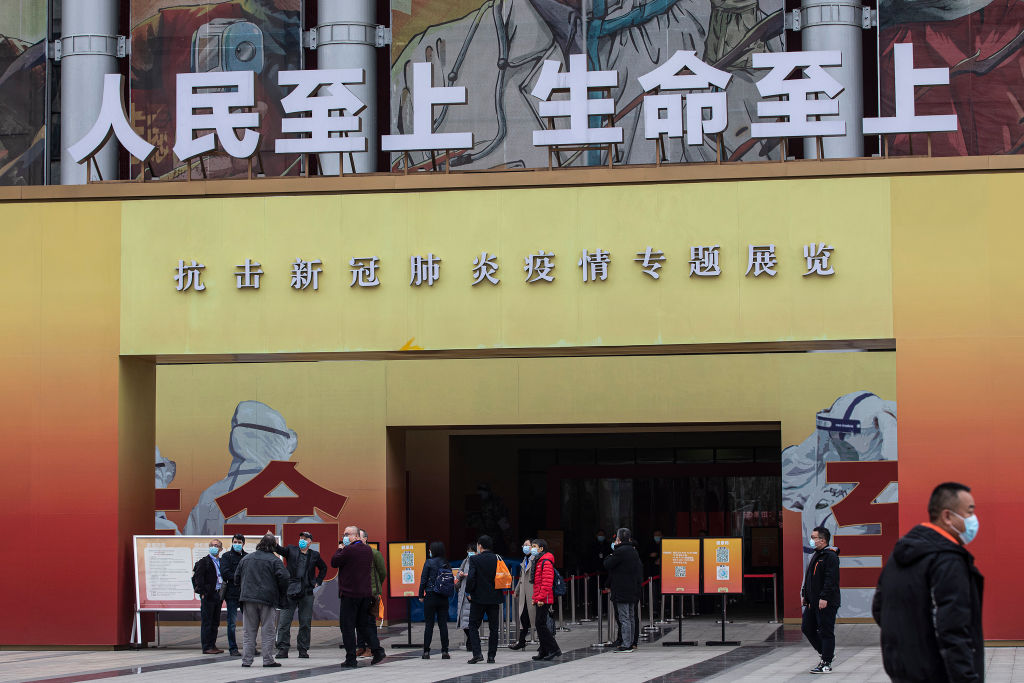 Members of a World Health Organization (WHO) delegation visit an exhibition on the city’s fight against the coronavirus on Jan. 30, 2021, in Wuhan, China.
Getty Images

It is “extremely unlikely” that COVID-19 started in a lab.

That was the major finding of the World Health Organization’s two-week investigation in China to try to solve the mystery of how the devastating COVID-19 pandemic began. The conclusion, announced by WHO officials at a press conference on Tuesday, all but ruled out a fringe theory, promoted by some U.S. officials, that COVID-19 escaped—intentionally or not—from a laboratory in Wuhan.

Instead, the WHO investigators said the most likely COVID-19 origin story is that the virus started in bats and passed to humans through another animal, like a mink.

“An intermediary host species is the most likely pathway,” the WHO’s Peter Ben Embarek said at the Tuesday press conference.

Still, the WHO investigators left plenty of other questions unanswered. They said they could not determine exactly how or when the virus was first transferred to humans or even if COVID-19 originated in China at all. Embarek confirmed that Wuhan’s Huanan Wholesale Seafood Market remained the most likely source of the initial outbreak but said more research is needed on whether the virus was transferred through live animals there or imported via frozen food products from outside the mainland. Another WHO investigator, Peter Daszak, said tracing of the market’s supply chain should extend beyond China, particularly to other places in Southeast Asia.

Many of the WHO’s findings were inconclusive, but they did have one clear outcome: They indirectly bolstered the case made by WHO’s partner in the investigation, China, whose state media has long endorsed the idea that COVID-19 did not originate in China.

At the Tuesday press conference, China’s investigators promoted the idea that the virus did not start in China and declared an end to origin-tracing research in the mainland. For months now, Chinese officials have floated the theory that the virus may have been imported on frozen food packaging, and it attributed a recent outbreak in Beijing to cold-chain storage.

“The work of the joint international team will set the groundwork for origin tracing work elsewhere…and will therefore not be bound to any location,” Dr. Liang Wannian, an expert on China’s National Health Commission, said on Tuesday.

The WHO, the United Nations’ global health governance body, passed an initial resolution to begin an investigation into the origins of COVID-19 in May 2020. Sorting out the details of the visit, however, would take months, and China was criticized for delaying the WHO team’s access to Wuhan.

On Jan. 6, WHO Director-General Tedros Adhanom Ghebreyesus issued his harshest criticism of China’s participation in the investigation, saying he was “very disappointed” that WHO scientists struggled to obtain the permissions necessary to enter the country.

However, once investigators entered China in mid-January and served a 14-day quarantine, scientists praised China for granting access to each of the sites they had requested to visit.

One of their first site visits was to a cold-chain storage facility, a nod to the idea that the virus could have been transported into China from elsewhere. On Jan. 30, Chinese officials led the investigators through an exhibit commemorating Wuhan’s early battle against COVID-19 and the city’s 76-day lockdown to contain the virus.

The investigators also visited Huanan Wholesale Seafood Market, where COVID-19 was first detected, as well as the Wuhan Institute of Virology, the laboratory at the center of the conspiracy theory that claimed lab scientists manufactured the virus, which later escaped from the facility.

Nicholas Thomas, a professor in global health governance at the City University of Hong Kong, says that the WHO’s investigation was a success in that it ruled out ideas on the “crazier end of the conspiracy spectrum,” but the investigation still suffered from fundamental problems imposed by China.

“The delay in starting the investigation in China has meant that we will probably never know the full story; it will always be obscured,” says Thomas. “The question mark that’s going to hang over the mission is if it could have been a greater success if going in earlier could have led to more data coming out.”

After the Tuesday briefing, state media outlets in China seized on the WHO investigators’ suggestion that the virus may not have originated in China.

The Global Times, a nationalist tabloid in China, said the WHO’s findings mean that more origin tracing efforts should begin in Southeast Asia. The China Daily, a government-backed English language newspaper, led its story about the press conference with the WHO’s conclusion that the COVID-19 origin investigation should not be geographically bound to China.

Both stores alluded to comments by Marion Koopmans, another WHO investigator, who said the agency must continue to trace products sold at the Wuhan market in December 2019 “to their sources, to the farms in other parts of China or even overseas.”

Thomas says that China’s theory that COVID-19 was imported on food is technically plausible, but he was startled by how much credence WHO investigators gave to the idea.

“That was surprising simply because that’s the first time we’ve even remotely considered a Southeast Asian origin story for this,” Thomas said. “The idea that it may have originated in Southeast Asia ran closer to the Chinese state narrative than we’ve seen from the WHO to date.”

Other scientists have dismissed the import theory entirely. They argue that WHO’s suggestion that the virus was introduced through interaction with live animals is far more likely, since food transmission is currently causing few, if any, local outbreaks around the world.

The U.S. government has indicated that it will not simply take the results of the WHO’s investigation at face value.

“We want to take a look at the data ourselves,” Jen Psaki, the White House press secretary, said at a press briefing on Tuesday. “We’ve expressed our concerns regarding the need for full transparency and access from China and the WHO to all information regarding the earliest days of the pandemic.”

Since the beginning of the pandemic, the WHO has come under fire in places like the U.S. for taking China at its word on COVID-related matters. Thomas said the WHO’s findings reflect the agency’s struggle to balance the interests of one of its most important member states and its mission to discover how the pandemic began.

“The WHO is caught between a rock and a hard place,” says Thomas. “The WHO is responsible to its member states, and in that respect they have to take into account Chinese wishes. But they are also trying to uncover the truth.”