Will the vaccines work against the South African variant of COVID-19? 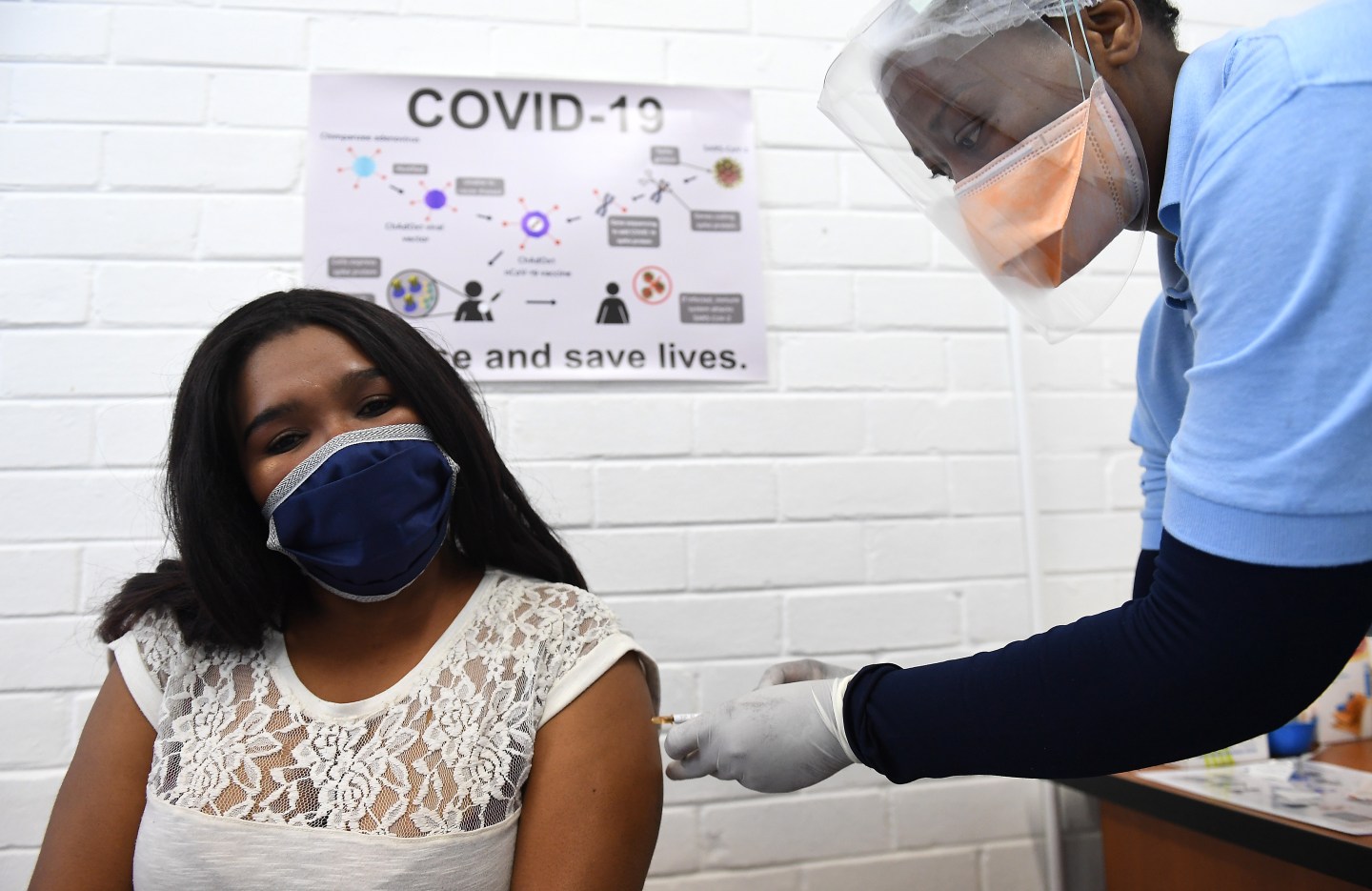 It’s a familiar story. Cases are spreading at “record pace.” Hospitals are overwhelmed. Basic supplies like oxygen, beds, and ventilators are running low. The rising number of hospitalizations has led some facilities to ration care.

Familiar, indeed—but not local. This worrying spike in COVID cases has occurred in South Africa, with the total recently surpassing 1 million and daily new cases climbing to more than six times what they were on Dec. 1. But beyond the usual suspects—travel and holiday gatherings, mass student celebrations, outings at restaurants and bars—there is a dark force at work: a new variant of the virus, now widely known as 501Y.V2. Like the U.K. variant, it seems to be more transmissible and contagious—and it has left scientists to question whether the vaccines we have will be effective against mutations of this strain.

The strain has been circulating since at least November, according to Shabir Madhi, professor of vaccinology at the University of the Witwatersrand in Johannesburg and the lead investigator of the Oxford/AstraZeneca and Novavax vaccine trials in South Africa. The mutated strain quickly became the dominant variant in the country, representing about 80% of all newly diagnosed cases. Madhi said it was first discovered in a major metropolitan region of the Eastern Cape Province, Nelson Mandela Bay, then rapidly spread to the Western Cape and KwaZulu-Natal provinces.

In many respects, this is unsurprising. Mutations are what allow viruses to continue transmitting. Most of the time, these small “copying errors”—genetic changes that occur as the virus replicates—have little impact on its effects. Occasionally, though, the mutations can enable the virus to infect a person more easily, result in either more or less severe disease, impact the speed with which the virus spreads, or perhaps enable the virus to better evade a person’s immune system.

The South African variant has eight mutations in the spike protein, three of which are in a key region called the receptor-binding domain. (The spike protein is a sharp projection that protrudes from the virus, allowing it to gain entry into human cells to trigger infection.) One is the same mutation as in the U.K. variant, which may result in both increased viral load and increased transmissibility of the virus; but researchers do not currently believe it will directly affect efficacy of the vaccines. The additional mutations, though, are concerning, because they further alter the conformation of the spike protein, which may make our body’s immune response to the virus less effective.

“I would worry a lot about the South African strain,” John Bell, the Oxford University scientist who worked on the Oxford AstraZeneca vaccine, told the Times earlier this week in the U.K., adding in a radio interview that the mutations associated with the South African form “are really pretty substantial changes in the structure of the [virus’s spike] protein.”

Both the U.K. and South Africa variants have many mutations. We don’t yet know the significance of each, but genomic and epidemiological data suggest that this virus is more transmissible. Some have estimated that the U.K. variant may be 50% to 70% more transmissible. Based on modeling data from the U.K., Madhi believes the strain is approximately 53% more transmissible. Experimental data corroborates that a particular mutation, which both the U.K. and South African variant share, “appears to increase the affinity of the virus to be able to attach to the ACE2 receptor,” says Madhi. Another mutation lets the virus enter cells more easily.

Transmissibility, of course, is a huge part of this COVID equation. Exponential growth means many more patients, overburdening health care systems—so more fatalities may occur in a shorter period of time. Health experts and the Centers for Disease Control (CDC) say there is no evidence to date that the South African variant (or other variants of the virus) will cause more severe disease or increased risk of death, but spread is another issue entirely. And epidemiologists in the U.K. have observed that their variant appears to infect children more often than did earlier strains.

Vaccines induce a “repertoire of antibody responses,” says Madhi. One of the mutations (E484K) of this South African variant, researchers believe, alters the shape of the spike protein such that antibodies people make (either in response to an infection or as a result of vaccination) may not be able to as easily latch on to this to fight off the virus. Timothy Henrich, a viral immunology expert, explained that the mutation is in “a critical area of the spike protein…Potentially it may reduce the strength and quality of antibody binding at the site.”

Per early laboratory work, “with the additional mutation at site E484K, antibody from people who have recovered from COVID-19 is probably about 10-fold less likely to be able to impact on the ability of the virus to infect [human] cells,” Madhi said. But he was quick to add that this doesn’t mean that vaccines are going to be 10-fold less effective. Rather, he said, a vaccine’s impact depends on the concentration of neutralizing antibody that is elicited by that vaccine: “If extremely high concentrations of antibody are induced, then these would sort of offset the increased resistance to some of the antibodies.”

In other words, our immune response depends on how many soldiers the vaccine brings to the battlefield. If plenty are at the ready, then a mutation that reduces the overall general firepower will be less of an issue. And there are other components of our immune response—T cells, or other antibodies not affected by the mutations—that likely play an important role in our protection against COVID-19.

Thankfully, there’s no evidence to date that this variant of the virus is either more virulent or more fatal than earlier versions, according to Madhi. But because the strain is more transmissible, all of the numbers—infections, hospitalizations, and deaths—will jump. South Africa’s health minister, Zweli Mkhize, told the Associated Press that with an exponential rise in cases, the country already is bracing “for increased hospitalizations and deaths.”

African public health officials believe this second COVID wave will have more severe effects because health systems have been largely depleted from the first wave—and because too many people believe the virus is not afflicting average Africans. To try to combat the virus, the African Centers for Disease Control has initiated a massive vaccination program in partnership with the World Health Organization.

Has the South African variant spread? It is reported to be in six other countries (Finland, the U.K., Australia, Switzerland, Japan, and Zambia), and Madhi suspects extensive travel in and out of South Africa means it is likely already in several others. As to whether the vaccines will still work on this strain, he described himself as “cautiously optimistic.”

“I think there’s a number of things in favor that this variant won’t have a major impact on the efficacy of the vaccine,” Madhi said. Added Henrich, “There is a mixture of hope that there will be at least some partial activity of the vaccine with this variant [and] some apathy or anxiety that it could actually undermine a more effective vaccine response—but we don’t know.

“There is some anxiety in my colleagues for sure,” Henrich said. “Whenever a mutation occurs in an area that can impact the structure of the protein and the way the antibodies interact, along with some emerging data that suggests that patient-derived antibodies or monoclonal antibody treatments may not work as well, that always gives us pause.”

Researchers in South Africa are studying whether this variant can evade vaccine-induced immunity; that is, they are looking to see whether vaccinated people have lower levels of neutralizing antibody because of the variant, relative to levels that were seen at earlier stages of the outbreak. Madhi said he believes such a study can be concluded “in a matter of weeks” via three vaccine trials currently underway.

On Thursday night, researchers reported in a non–peer-reviewed preprint that antibodies taken from 20 individuals who received the the Pfizer-BioNTech COVID vaccine were able to effectively neutralize virus with a key mutation that is found in both mutant strains. “The experiments did not include the E484K and an additional mutant in the receptor-binding domain [of the South African variant], which are the concerning mutations with possible reduced vaccine and natural-induced neutralizing antibody,” noted Madhi. So, while certainly encouraging, further data is needed to prove the vaccine’s effectiveness in preventing COVID-19 owing to new virus variants.

Moderna has expressed confidence too that its vaccine would work. The CDC’s website says there’s currently no evidence that the effectiveness of vaccines is affected, and “most experts believe this is unlikely to occur.”

Scientists and vaccine developers are feverishly studying these variants both in laboratory and animal models, testing the variants against antibodies elicited by vaccines and natural infections in order to understand more. A team in Durban, South Africa, working with virologist Alex Sigal at the Africa Health Research Institute, for example, is evaluating the effects of the E484K mutation in that country’s variant by testing blood from recovered COVID patients and those previously vaccinated. Results will be available in a few days.

And there’s another avenue of attack. If the vaccines are rendered significantly less effective or ineffective by the mutations, some of them could be easily adapted. “All it takes is basically replacing the current genetic material with the variant sort of genome that codes for the spike proteins,” says Madhi. Vaccinologists suspect it would take just five to six weeks to do this, although research would still be needed to demonstrate safety and efficacy.

Will there be more mutations? You can count on it; it’s a natural phenomenon. Henrich points out that the rapid, uncontrolled spread of the virus right now is permitting it to replicate, allowing mutations to occur more easily. “If we could decrease transmission and new infection rates, then we could decrease the rapidity of which these viruses mutate,” he said.

So far, the mutation rate for COVID-19 is far less than that of some viruses, like the flu. “We can continue expecting to see these mutations,” Madhi said, “but I think our experience in terms of the efficacy of the current generation of vaccines against this specific variant would be very informative in terms of what the implications would be for the future evolution of the virus in terms of mutations.”

In the meantime, South Africa is rushing to curb the spread. The country moved in late December from a level 1 lockdown to an adjusted level 3, prohibiting all social gatherings—probably the most important factor, Madhi said—and severely limiting other activities. It also banned all alcohol sales. As for travel, experts say the virus already has spread to other places at this point, the professor noted, so shutting down movement is perhaps naive. But Henrich said limiting travel for other reasons, as well as issuing stay-at-home orders, absolutely can slow the spread.

“Public health measures can actually help reduce emergence and spread of these new variants,” Henrich said. “We need to be very aggressive to make sure that we have some in place and that we follow them.” It is advice that would be well-heeded around the world in order to contain the spread: Wear well-fitting masks, avoid large gatherings, get vaccinated, and give ourselves reasons to be “cautiously optimistic.”

CORRECTION: In an earlier version of this article, the E484K mutation on the South African variant of the novel coronavirus was incorrectly identified on multiple instances due to a typographical error. The article has been updated.

Carolyn Barber, MD, has been an emergency department physician for 25 years. She is cofounder of the homeless work program Wheels of Change and the author of many articles and the book Runaway Medicine: What You Don’t Know May Kill You, which was recently Amazon’s No. 1 Hot New Release in Health Care Administration.