Photos: A look at the nationwide riots today 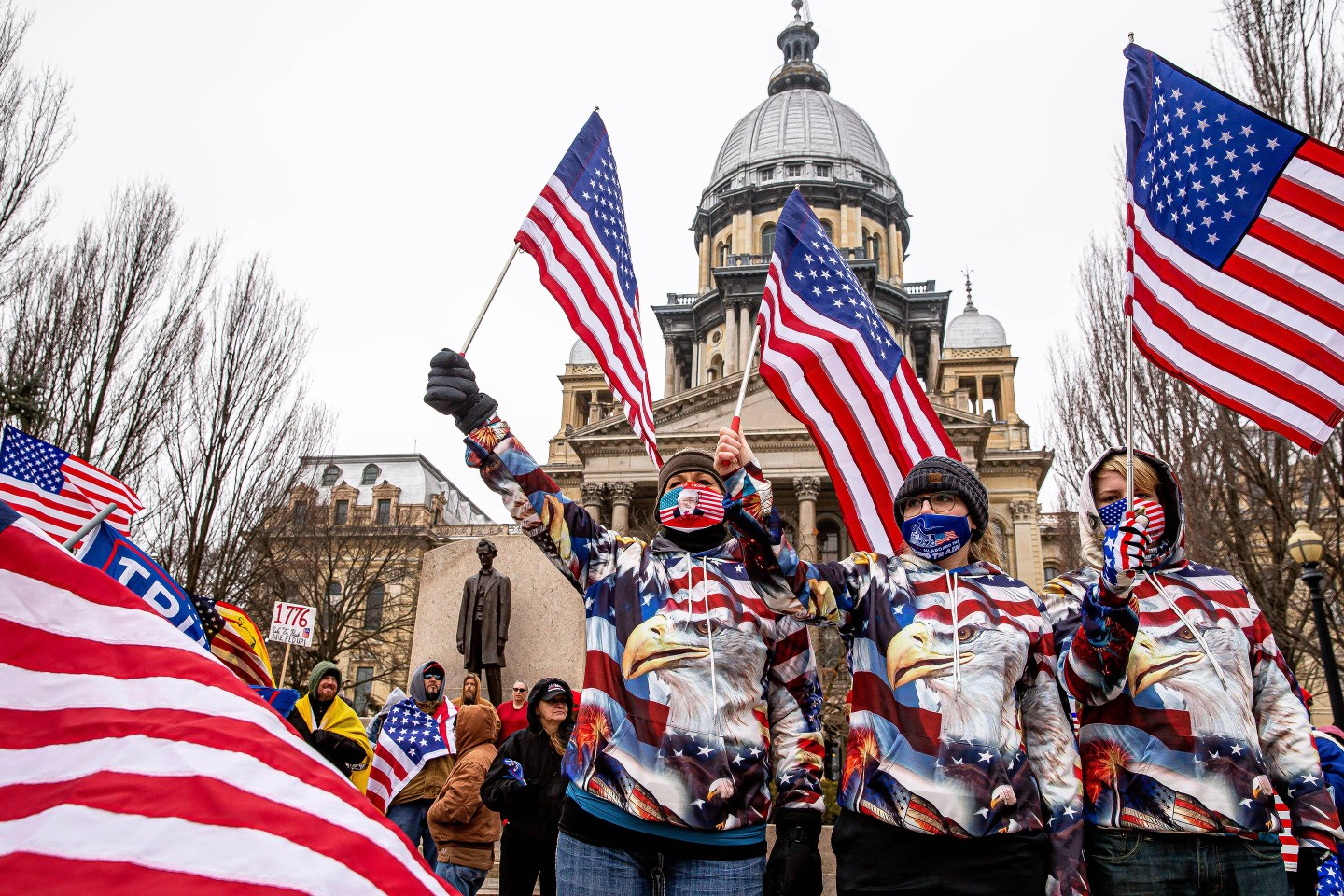 Tonya Powers (left) along with her children Chloe Powers, 15 (center), and Stone Powers, 13 (right), stand in support of President Donald Trump during a rally in front of the Abraham Lincoln statue at the Illinois State Capitol.
Justin L. Fowler—USA TODAY NETWORK/Reuters

On Wednesday across the country, hundreds of pro-Trump demonstrators gathered in state capitals to oppose President-elect Joe Biden’s win. They massed outside statehouses, rallying while rioters stormed the U.S. Capitol in Washington, D.C.

From Georgia to New Mexico to Oklahoma, crowds of people carried signs emblazoned “My vote was stolen!” and “Stop the steal” and waved Trump and U.S. flags. The heated demonstrations broke out as Congress tried to affirm Biden’s Electoral College victory.

In some states, officials have ordered closures and evacuations in the face of armed demonstrators. In Colorado, city agencies in Denver closed buildings. In Georgia, the secretary of state and his staff evacuated their offices at the state Capitol. Republican Secretary of State Brad Raffensperger has been the target of President Trump’s fury over his loss in the state by nearly 12,000 votes. (In the midst of demonstrations, Democratic senators cinched Georgia’s Senate runoff.)

Trump has encouraged the protests over the past two days. On Wednesday, after hours of chaos, he tweeted a taped video message calling for his supporters to retreat (“You have to go home now”) while claiming baseless election fraud (“We had an election that was stolen from us”).

Below, view images of the nationwide gatherings.

In Los Angeles, Trump supporters protested the certification of Joe Biden as the next President.
Ringo Chiu—AFP/Getty Images
Demonstrators rally during an Occupy the Capitol gathering at the Iowa Capitol.
Olivia Sun—The Register/Imagn Content Services/Reuters
Armed men stand on the steps at the State Capitol after a rally in support of President Donald Trump in Lansing, Mich.
Paul Sancya—AP Photo
Trump supporters rally at the state Capitol in Oklahoma City.
Sue Ogrocki—AP Photo
People participate in a pro-Trump rally at the state Capitol in Phoenix, as the U.S. Congress meets in Washington, D.C., to certify the results of the presidential election.
David Wallace—The Republic Imagn Content Services/Reuters
Sharon Dean of Palm Bay holds up the U.S. flag as those around her recite the Pledge of Allegiance during the Stop the Steal protest at the Florida Capitol building.
Tori Lynn Schneider—Tallahassee Democrat/Imagn Content Services/Reuters
A rally on the north side of the Nebraska State Capitol in Lincoln.
Francis Gardler—Lincoln Journal Star/AP
Protesters rally in support of President Donald Trump outside the New York State Capitol where legislative members will meet for the start of the 2021 legislation session in Albany.
Hans Pennink—AP Photo
Chester Doles, rear center, leader of American Patriots USA, is surrounded by supporters as he makes his way to a Stop the Steal rally outside the Georgia State Capitol building in Atlanta. Doles gave a speech at the rally and then entered the building in a failed attempt to speak with Georgia Secretary of State Brad Raffensperger.
Alyssa Pointer—Atlanta Journal-Constitution/AP