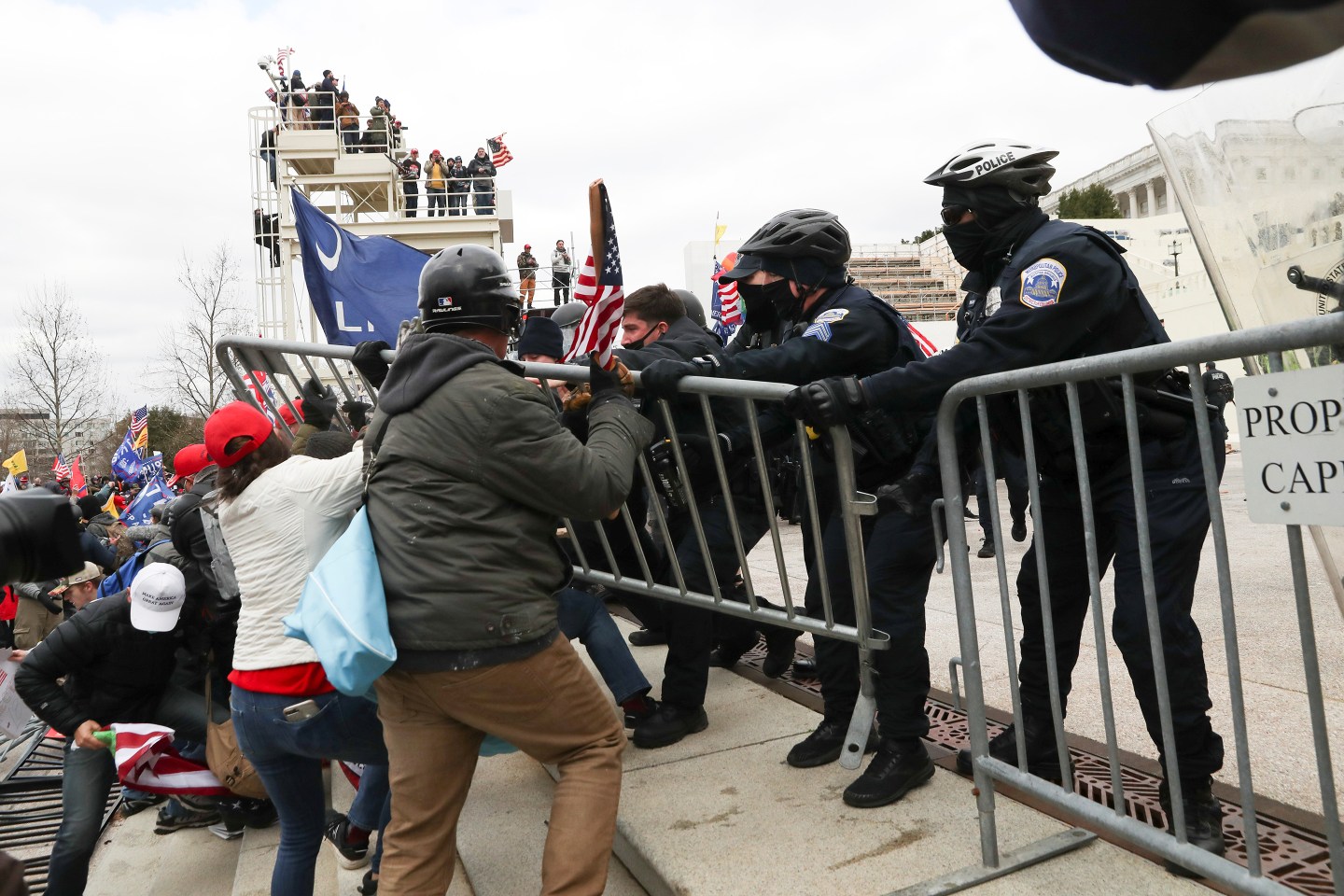 Hundreds of Trump supporters stormed the Capitol building in Washington, D.C., Wednesday afternoon, pushing past metal barricades and security guards and breaking fences along the way. The group, many carrying American flags and Trump 2020 flags and signs, were protesting the transfer of power from President Donald Trump to President-elect Joe Biden.

As the Senate convened to certify the Electoral College vote, the group, falsely asserting that the election has been stolen from Trump, forced the certification proceedings to a halt.

Capitol police ordered the evacuation of two campus buildings—the Library of Congress James Madison Memorial Building and the Cannon House Office Building—and placed the Capitol under lockdown as protesters breached the building and gathered outside the Senate chamber. “All buildings within the Capitol Complex, Capitol: External security threat, no entry or exit is permitted, stay away from exterior windows, doors. If outside, seek cover,” they said in a message to those working on the Hill.

“I just had to evacuate my office because of a pipe bomb reported outside,” tweeted Democratic Congresswoman Elaine Luria, whose office is located in the Cannon building.

Those present at the scene reported that gunshots were fired in the House chamber and that there was currently a standoff between Capitol police and rioters. Staff in the Senate press gallery advised journalists that they would be locked in the Senate chamber for their protection.

The police attempted to use smoke explosives to try to stop the crowds but were unable to block them from moving in. The police noted several suspicious packages around the building and asked for additional law enforcement assistance and help from federal authorities.

The forceful storming comes during two days of protests, which were largely encouraged by President Trump. Thousands attended events, including a speech given by the President himself. “We will never concede,” Trump told the crowd. “You don’t concede when there’s theft.”

After protesters had infiltrated the Capitol building, President Trump tweeted, “Please support our Capitol Police and Law Enforcement. They are truly on the side of our Country. Stay peaceful!”

The certification of Biden’s presidency, underway in the Senate, was paused owing to the protests, and Washington, D.C., Mayor Muriel Bowser instituted a citywide curfew from 6 p.m. Wednesday evening to 6 a.m. Thursday morning.