In the COVID vaccine rollout, our expectations don’t match reality 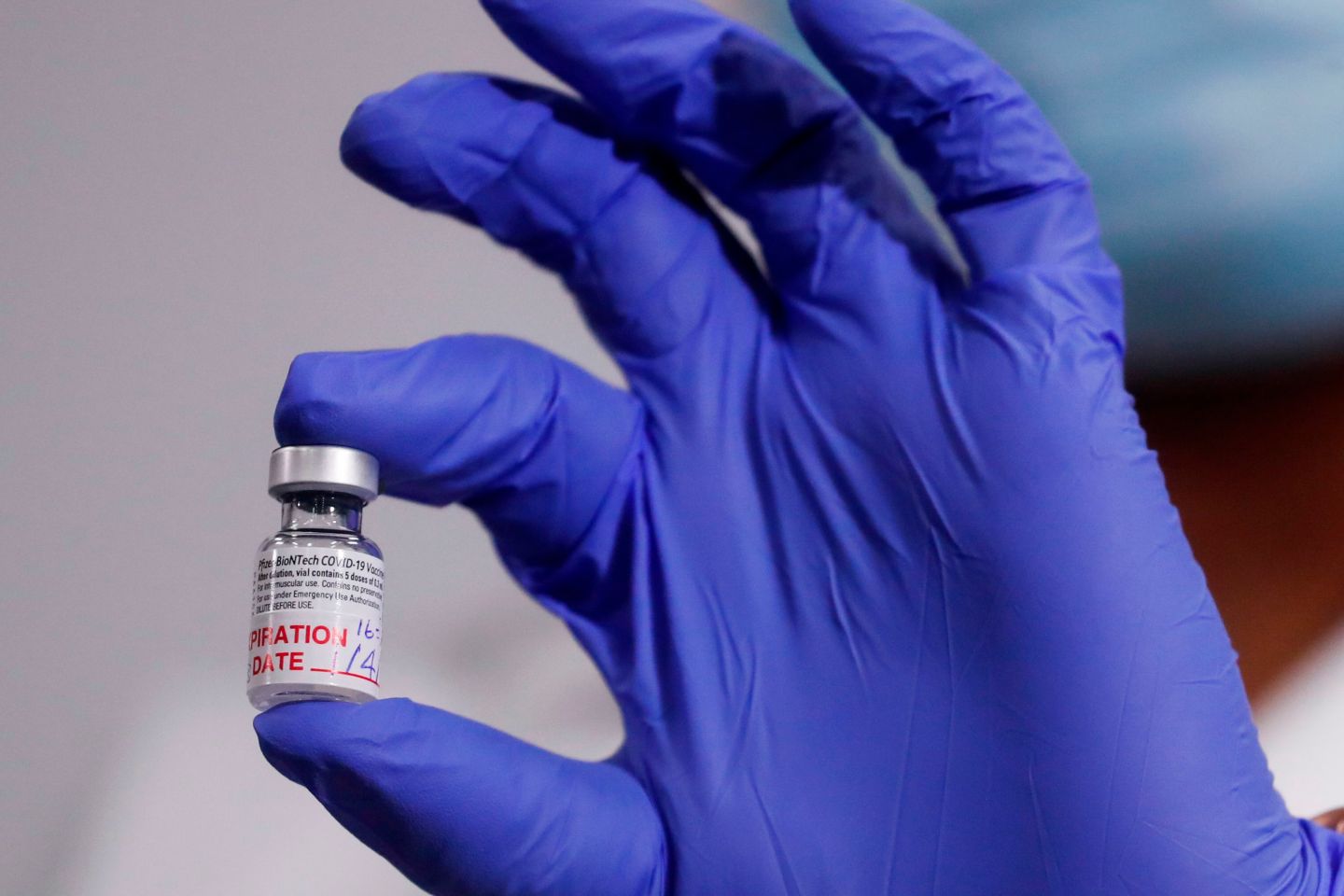 “Even under the best circumstances,” writes the author, the rollout of a COVID vaccine “was never going to be smooth—and it was destined to take longer than anyone wanted to admit.”
SHANNON STAPLETON—AFP/Getty Images

When William Schaffner discusses the distribution of the COVID-19 vaccine, the health policy and infectious diseases expert compares it to a process that’s picking up steam—literally. He says he thinks about the rollout as the functional equivalent of starting a locomotive that’s sitting on the tracks. And locomotives can take a while to really get going.

Soon enough, though, that train “will be steaming down the track across the country, and people will be vaccinating more efficiently,” Schaffner, of the Vanderbilt University School of Medicine, said in a recent interview. “I think it’s taken a little time and it’s taken much more effort to implement an actual vaccination program than Washington ever imagined. Those goals were much too aspirational. So I don’t think we ought to be too grumpy about this. We need to cut everybody some slack.”

In the politically turbocharged atmosphere surrounding the COVID crisis in the U.S., restraint and reason may sound like impossible asks. But any close inspection of the facets and layers of a national vaccination rollout should lead us past politics and straight to the realization that, even under the best circumstances, it was never going to be smooth—and it was destined to take longer than anyone wanted to admit.

The Trump administration’s bungling of the process hasn’t helped—and the failures are amplified by the signals put out by the folks at the top. While the President plays golf and the vice president takes to the slopes in Vail, intensive care units (ICUs) are filling to capacity, with patients sometimes being attended in parking lots, hospital chapels, and gift shops. A newly elected 41-year-old congressman has died from complications of the coronavirus, one of the more than 350,000 Americans who have fallen to the disease. A highly contagious new variant of the virus has arrived, raising the stakes. And the one thing the Trump administration promised for months, a well-constructed distribution plan via Operation Warp Speed, looks like so many empty words.

But the emphasis on the Trump team’s shortcomings obscures the larger question: What, exactly, did we expect? It’s critical to remember the scale of this effort. We are trying to deliver about 500 million doses of the vaccines, with Pfizer transporting its product (developed with Germany’s BioNTech) via dry ice thermal shippers (with remote temperature monitoring systems installed) and moving them from factories to trucks to rural areas, pharmacies, public health clinics, hospitals, and long-term-care facilities. It’s a massive undertaking, with lots of opportunity for something to go wrong.

And things have gone wrong already. Texas Gov. Greg Abbott tweeted last week that a significant portion of the vaccines given to his state may well be simply “sitting on hospital shelves,” while in Florida, Gov. Ron DeSantis’s decision to bypass federal recommendations and prioritize senior citizens led to a massive demand problem, with elderly residents of the state waiting in long lines at vaccination sites. In Houston, the city’s first COVID-19 call center for vaccine appointments was quickly overwhelmed Saturday with over 250,000 calls and was soon “experiencing technical difficulties,” according to the city’s health department.

Another contributing factor to the slow rollout may be that states have set aside a large portion of their doses for residents of long-term-care facilities, said Claire Hannan, executive director of the Association of Immunization Managers, which represents state immunization officials. Additionally, the holidays meant closings or limited hours at many clinics, and hospitals are spending time training providers and health care personnel as well as strategizing about how to handle and distribute what Hannan called “a very delicate vaccine.”

This is precious cargo indeed. The cooling system for Pfizer’s vaccine must be refreshed with dry ice every five days for up to 30 days, and it’s recommended that its thermal shipper not be opened more than twice a day—and even then, only for one minute at a time. The other option, which is hardly an option at all for many smaller facilities and rural facilities, is to store the vaccine in an ultra-low-temperature freezer, each of which costs around $15,000. The protocol for Moderna’s vaccine, meanwhile, is completely different—it cannot be stored on dry ice at all, for instance.

There’s also a critical need to be sure the rollout is handled equitably. And as health officials have often noted, the unpredictable nature of vaccination campaigns that are targeted to specific populations presents challenges. “There is a balance between controlling the vaccine in order to avoid waste [and] vaccinating those who are prioritized, and rapidly getting the vaccine into arms,” writes Hannan.

It adds up to quite a lot. Anthony Fauci, the nation’s most visible infectious diseases expert, put it bluntly in an interview with NBC’s Today show: “This is the largest and most important vaccine program that we have ever undertaken. We would have liked to have seen it run smoothly and have 20 million doses into people today, which was the projection. Obviously, it didn’t happen.”

On important levels, this has been a process of mismanaged expectations. It was in September that President Trump promised the American public 100 million doses of the vaccine by year’s end, a figure that almost all experts agree was wildly overstated. As Schaffner told me, one of the administration critical missteps was “overpromising, while underdelivering. That’s always a big mistake.”

According to the Bloomberg COVID Vaccine Tracker, almost 13 million doses of the Pfizer and Moderna vaccines had been shipped to states as of the evening of Jan. 3, but only 4.3 million people had yet received the first dose. Similarly, in California, where ICUs are filling to capacity, fewer than one-third of the doses distributed have been given out to first-priority recipients, including health care workers, nursing home residents, and frontline providers.

There’s a lag in the reporting of the Bloomberg data, so it’s probable that the actual numbers of people vaccinated are higher. But even if we assume the number of administered doses is double, that still leaves about 4 million doses sitting around somewhere. Clearly, even if some of those doses are being held for patients’ second doses, the pace of delivery isn’t adequate. At the current distribution rates, an NBC News analysis from last week concluded, it would take almost 10 years before we could vaccinate enough people to control the pandemic.

Reports of millions of doses sitting in warehouses are concerning, given the extent of the crisis and the finite shelf life of the vaccines. While Health and Human Services Secretary Alex Azar told reporters in December that Pfizer was having some “manufacturing challenges,” Pfizer denied in a statement that it was having any production issues, adding that it had “millions of doses sitting in a warehouse” ready to ship, “but we have not received any shipment instructions for additional doses.”

Trump did little more than pass the buck in a recent tweet, noting: “The Federal government has delivered the vaccines to the states. Now it’s up to the states to administer. Get moving.” And strictly speaking, Schaffner said, the federal government has done what it said it would do: Operation Warp Speed was always designed to create a vaccine and deliver it to the states, particularly the Moderna vaccine (Pfizer delivered its own). But the handoff process has been chaotic and at times scattershot.

State and local agencies under fire

State and local agencies, Schaffner said, have been doing a “whole lot of planning with constant revisions as new information has come in. Public health officials and staff have been working nights and weekends for a long time, and they are under all kinds of pressure to do this absolutely flawlessly.” In a self-described “rant” on Twitter, Ashish Jha, a professor at Brown University’s School of Public Health, said agencies have been working nonstop for nine months, “handling all the testing, data analysis and reporting, providing advice to businesses, schools, doing public campaigns, etc.” Jha said he worries about adding vaccines to their responsibilities when they are “super-stretched” already. As for the federal government’s role? “No plan. No money,” Jha tweeted. “Just hope that states will figure this out.”

It is, as Hannan described it, a “herculean task”—and at its heart, she notes, it’s an effort “to distribute a government-supplied COVID vaccine through a private-market infrastructure,” with all the legalities, licensing, vetting, and organizational requirements that implies. Added Schaffner: “The planning for this is much more complicated than it first appeared, I think, when you were distantly in Washington. The state and local health departments are stressed because they haven’t received the additional resources they need to do all of this—primarily more people. People cost money, and one needs to train them.”

What’s more, reaching underserved populations who have been disproportionately affected by the virus—including Black and ethnic communities, as well as residents of lower-income neighborhoods and urban areas—is often going to require explaining the potential benefits of the vaccine to people who have reasons to be hesitant. “You can’t do all this by social media,” Schaffner said. It takes people meeting people where they stand, and it takes time.

At Schaffner’s Vanderbilt University Medical Center, misinformation and skepticism accompanied the vaccine’s rollout even among medical personnel and pharmacists. The center responded by producing educational videos and conducting question-and-answer sessions, helping to get the hospital staff on board. The center now has vaccinated more than 15,000 people.

The goal for these initial stages of the rollout should be something perhaps more modest than the unreachable numbers laid out by Trump back in September. After all, the goal of a deliberate process should be to avoid costly mistakes. As Schaffner put it, health professionals are being careful “to walk before they run.” They want to avoid foul-ups like a recent case in West Virginia, where 42 people were mistakenly given a monoclonal antibody treatment instead of the COVID-19 vaccine. Such events attract negative attention and throw important messaging off track.

And let’s not forget that beyond the need for a careful rollout, medical facilities are stretched to the breaking point treating current COVID patients—a process that, sadly, shows no sign of easing. Under no scenario was the effort ever going to be conducted without headwinds.

Believe it or not, it’s still early. Yes, we were overpromised, and there is no way to undo that. On the other hand, the New Year is looking brighter—more than 700,000 Americans were vaccinated on Jan. 2, by far the highest total for a single day so far. And while the Department of Health and Human Services has provided only $340 million to states to fund vaccine distribution, lawmakers have allotted more than $8 billion to aid the process as part of the COVID stimulus package they just passed.

This is, as Biden told reporters recently, “the greatest operational challenge we’ve ever faced as a nation—but we are going to get it done.” That will happen as his administration increases its support to states, and as more of us learn about the vaccines, get the reassurances we need, and get vaccinated. In the meantime, let’s cut folks some slack and see how this big engine rolls as it kicks into high gear.

Carolyn Barber, MD, has been an emergency department physician for 25 years. She is cofounder of the homeless work program Wheels of Change and the author of the book Runaway Medicine: What You Don’t Know May Kill You.