Why ‘soft robots’ have NASA, doctors, and tech whizzes so excited 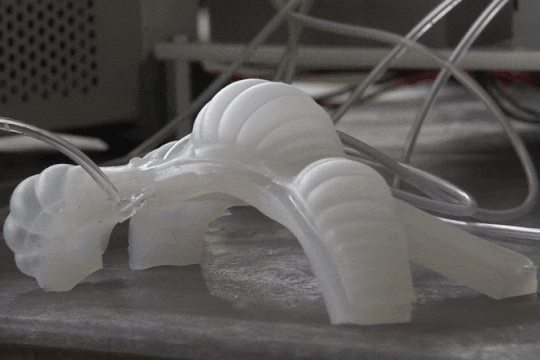 Soft robots are flexible machines that have many useful applications and advantages, such as in surgery, says Don Basile.
Gary Banzinger—NASA

The appeal of “soft robots” lies in their flexibility and versatility.

NASA scientists envision them one day skittering across the surface of Mars. Others see them worming their way into the deepest recesses of the human body.

Yet another possibility, according to Georgia Tech assistant engineering professor Ellen Mazumdar, is that they could be used to sift through the wreckage of a building following an earthquake or fire.

Prosthetics? Sure. Exosuits, to facilitate recovery from injury or stroke? Why not?

Bend them, shape them, any-way-you-want them. Soft robots are made of the squishiest stuff, including nanomaterials, enabling them to approximate biological functions such as those of human muscles. It could be said, in fact, that these robots are nearly brought to life by nanomaterials.

And here’s the thing: Researchers are merely scratching the epidermis of soft robots. It is expected that the market for them will reach $2.16 billion by 2024.

Metallic robots are far more limited. They were constructed with speed and precision in mind, making them ideal for things like assembly line work. But they are not all that versatile.

While soft robots can also be used in an industrial setting—particularly as collaborative robots (also known as “cobots”) working alongside humans—they are hardly confined to it.

As Steven Vogel, the late biomechanics researcher at Duke University, once wrote, such robots are more in line with the natural world, where stiff materials are doled out “with a stingy hand.” Bones and teeth, he allowed, are exceptions to the rule, but where humans have often used rigid materials like metal or wood, nature is more apt to employ flexible (yet sturdy) materials, such as muscle and cartilage. As an example, he contrasted a door hinge and a hinge of another sort—the ear of a house pet.

Humankind is, however, beginning to catch on. Consider our increased usage of printed liquid metal, for instance. The material, which sounds like something out of a sci-fi movie, can be used to create stretchable electronics and wearables that conform to irregular geometric shapes—including the human body. The implications are vast, since liquid metal can also be used with electrodes, interconnects, and antennas.

Liquid silicone rubber is another prime example and has long excited the soft robotics community. In 2016, Harvard scientists used it to develop the Octobot, the first-ever soft autonomous robot. Inspired by octopuses, these squishy robots can twist and turn past obstacles that may prove impossible for jerky, stiff metal ones like those portrayed in the likes of Terminator or Star Wars.

“[A] very interesting potential application for this type of robot is in high-risk, dangerous areas such as search-and-rescue,” Michael Wehner, a Harvard researcher on the project, told Live Science.

Amazingly, the Octobot is cheaper to make than a latte, and it costs only 5¢ to fill it with fuel. One can imagine hundreds of cheap, soft robots being sent in to investigate a scene, wriggle through obstacles, and navigate tight quarters to assist in a rescue mission.

“The main objective [of soft robotics] is not to make super-precise machines, because we already have them,” biomedical engineer Giada Gerboni said in a 2018 TED Talk, “but to make robots able to face unexpected situations in the real world.”

NASA scientists, for example, are developing robots that they hope can not only move about some far-off world like Mars, but also form temporary shelters and perform various tasks.

Gerboni also discussed the development of surgical instruments (notably endoscopes) that make use of soft robotics, enabling them to navigate around bodily structures more easily than traditional instruments can. This gives physicians a much clearer view of the area within a patient’s body they wish to examine.

Similarly, carbon-based titanium polymers can be used in combination with synthetic polymers to create ultrathin artificial muscles. This technology was demonstrated in artistic replicas of dancing butterflies, fluttering leaves, and blooming flowers at the Korea Advanced Institute of Science and Technology.

Soft robots are not without their flaws. Specifically, scientists have found that the fluid actuators—the devices that actually bring the robots to life—are slow to power up because of the sheer amount of fluid that is required to compel movement, or because their flow is slowed by various structures within the device (such as tubes and valves).

Harvard researchers are, however, developing a workaround based on the physical principles of a children’s pop-up toy. Noting that the buckling of such toys results in the release of a great deal of energy, they are designing actuators featuring two pop-up caps, one inside the other. When the outer cap is inflated, pressure builds upon the inner one. When it buckles, the energy release propels the device.

Soft robots have potential that extends to Mars and back, and they will undoubtedly become a bigger part of society in the years to come. Their possibilities are limited only by the human imagination.

Don Basile is cofounder and CEO of Monsoon Blockchain.